How to Use Game Mechanics to Reward Your Customers 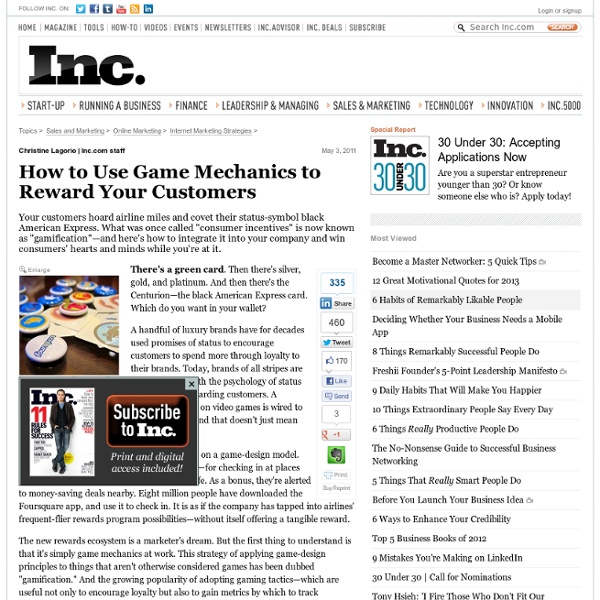 There's a green card. Then there's silver, gold, and platinum. And then there's the Centurion—the black American Express card. Which do you want in your wallet? A handful of luxury brands have for decades used promises of status to encourage customers to spend more through loyalty to their brands. Consider Foursquare, a company built entirely on a game-design model. The new rewards ecosystem is a marketer's dream. "Historically, customer engagement was something big brands did a lot better due to full scale loyalty programs," says Gabe Zichermann, a blogger who authored Game-Based Marketing and who hosts of the Gamification Summit. That's changing. Rewarding Customers Through Gamification: Why Game Mechanics? People are hard-wired to enjoy positive reinforcement. Consider golf: Social interaction aside, why would anyone go to a course and attempt to hit a tiny ball into a far-away hole? "Foursquare was a really great early example of this happening," McGonigal says.

SCVNGR's Secret Game Mechanics Playdeck Some companies keep a playbook of product tips, tricks and trade secrets. Zynga has an internal playbook, for instance, that is a collection of “concepts, techniques, know-how and best practices for developing successful and distinctive social games”. Zynga’s playbook has entered the realm of legend and was even the subject of a lawsuit. SCVNGR, which makes a mobile game with real-world challenges, has a playdeck. It is a deck of cards listing nearly 50 different game mechanics that can be mixed and matched to create the foundation for different types of games. I’ve republished the accompanying document below, which should be interesting to anybody trying to inject a gaming dimension into their products. Rght now, that should be a lot of people. SCVNGR’s playdeck tries to break down the game mechanics into their constituent parts. SCVNGR Game Dynamics Playdeck 1. Definition: A virtual or physical representation of having accomplished something. 2. 3. 4. 5. 6. 7. 8. 9. 10. 11. 12. 13. 14.

Paper Towel Problem Solved I had a problem. In my classroom bathroom (my room used to be a preschool classroom), I would find tons of paper towel trash all over the floor whenever students washed their hands after a messy project. I tried just remind them to get their paper towel in the trash can and telling them we shouldn't make our awesome custodians' jobs harder and none of it worked. I printed a really simple sign (shown above) that says: Paper Towel in the Trash Can 100 POINTS!!! Paper Towel on the floor... Added some smiley faces and sad faces and some burst shapes behind the points, laminated it, and taped it to the paper towel dispenser.

How to Use Gamification to Reward Customers and Engage Prospects Everyone wants new business. But sometimes we get so wrapped up in trying to predict what the next great lead-gen tactic will be, we forget that new business doesn't come just from new customers. It also comes from your current customers, and it's a lot cheaper to acquire, to boot. Most marketers have undoubtedly seen the Bain & Company study that put hard numbers to the new-versus-existing-customer conundrum: it's six to seven times more expensive to gain a new customer than it is to retain an existing one, and a 5% increase in customer retention can boost profit from 25%-95%. You can always try to make your customers happier by sending them free goodies, responding to emails quicker, and smiling more when you see them, but odds are that any gains you'll see aren't going to move the needle much. The practice of adding game mechanics to your marketing arsenal will accomplish more than adding a bit of fun: It adds incremental value. Give as often as you take Reward at the intrinsic level

design principles Defeating an enemy; overcoming an obstacle; surviving in the face of adversity: success and failure are at the very core of the game-player's experience. Games offer players a number of choices, some of which lead to success and some of which lead to failure or non-success. Together with the challenges presented to the player, the fact that the player might fail lends significance to the player's choices and actions. Although failure can be a negative experience, it is also the very thing that makes success meaningful. There are two kinds of failure in games. One kind of failure concerns the player's inability to satisfy a particular success condition that nevertheless remains satisfiable, and another kind of failure takes place whenever the player encounters a particular failure condition. The manner in which a game responds to player failure is essential to its design. Progress is defined as the act of moving forward toward a goal. Further reading:

Sixty-two Reasons Why &quot;Gamification&quot; Is Played Out | Co.Design "Game mechanics" are the new digital hotness these days. Fueled by business books like Total Engagement, successful apps like Foursquare, and presentations-gone-viral like Jesse Schell's "gamepocalypse" talk, it seems like every damn thing on the Internet is getting some gamelike interaction grafted onto it like a cyborg appendage. And Sebastian Deterding, a designer and researcher at Hamburg University, has had enough. He distilled his thoughts on "gamification and its discontents" into an embeddable 62-slide presentation that's pithy and pretty in equal measure. Deterling attacks the gamification trend from a variety of angles, but his argument boils down to this: points, badges, and leaderboards do not a true game make. Here's his visual indictment of how points -- a key feature of gamified products, services, and marketing schemes -- miss the point: The whole presentation is worth viewing.

Why the Gamification of Learning Became so Successful Who could have predicted that the gamification of learning could have yielded such continued success, for students of all ages? If twenty or so years ago you were to tell an educator that the future of learning exists in digital gaming, you’d probably be laughed at. Not too long ago games were viewed almost universally as a deterrent to education—the word “videogame” had nothing but the most negative connotation to many parents and educators. Games weren’t viewed as sources of learning, but ones of distraction. Of course that has all changed in recent years. Modern technology enhances the learning experience Educational games have been around almost as long as the video gaming industry. But the advent of the smartphone, and more recently the tablet have made educational gaming a real and vibrant industry. Kids don’t have an aversion to new educational games Today’s educational gaming app doesn’t read for kids as a boring and rueful exercise.

Gamification Platform | Gamify The 50 Best Videos For Teachers Interested In Gamification Image by Sezzles via Flickr Creative Commons Gaming in education is a really big deal, and a very fun way to get students more involved and interested in education. Board games, video games, even active outdoor games all have an important place in education, and these videos share more about their role in learning. Check out our list of 50 awesome videos for gaming teachers to discover what experts, teachers, and even students have to say about using games for education. Gabe Zichermann: How games make kids smarter : Check out Gabe Zichermann’s TED talk to find out how video games can actually make kids smarter and better problem solvers. Johnny Lee demos Wii Remote hacks : Check out this video to see how you can turn a cheap Wii Remote into a sophisticated educational tool. Game On! Game Based Learning in Special Education : Andre Chercka discusses his experience with game-based learning and how it can be applied to special education in this talk.

Idea Street | Spark Showcase | Discover & Share Innovation Idea Street is an online ideas-management platform that encourages employees to share their innovative ideas for change with a community of likeminded colleagues, and work with those colleagues to help make their ideas a reality. Instead of submitting an idea to a closed suggestion box, like a typical staff suggestion scheme, Idea Street puts ideas out in the open, so that other people within an organization can vote and comment on the suggestions of others. In this way ideas can be refined by the collective expertise within the community and the most promising suggestions can be brought to the attention of relevant decision makers. Idea Street encourages employees of all grades, roles and locations across an organisation to take part in what becomes essentially a decentralised innovation process. It is often front-line employees, who are closest to the customers and the work of delivering products and services, that have some of the freshest ideas and insights.

Gamification Categorization[edit] Gamification in a narrow sense is used in a non-game context, is built into the service system, and is aiming at an infinite experience. It does not aim at creating a game but offering a gameful experience. In a broader sense gamification also includes game context such as in serious games and finite and infinite games.[20] Another categorization compares gamification with other gameful approaches by looking at characteristics such as spontaneity, rules, or goals:[20] Techniques[edit] Gamification techniques strive to leverage people's natural desires for socializing, learning, mastery, competition, achievement, status, self-expression, altruism, or closure. Another approach to gamification is to make existing tasks feel more like games.[27] Some techniques used in this approach include adding meaningful choice, onboarding with a tutorial, increasing challenge,[28] and adding narrative.[27] Applications[edit] Gamification has been widely applied in marketing.