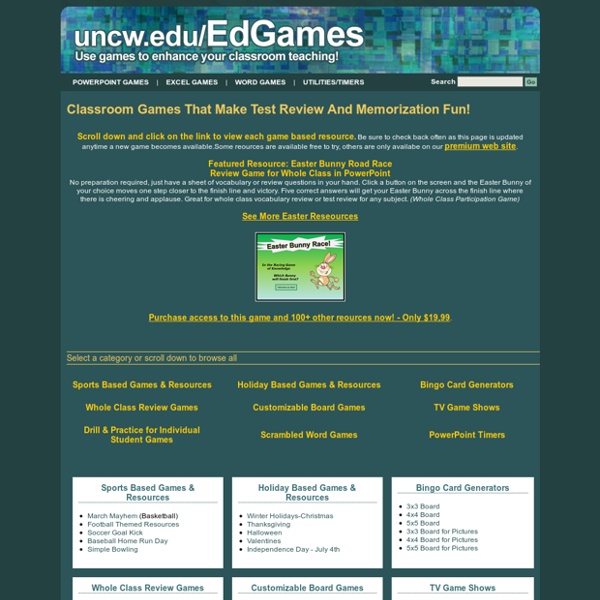 What is this Site All About? Are you interested in using games in your classroom but just can't find ones that match your curriculum? Have you tried to create video or board games for your classroom only to be overwhelmed by the amount of time and effort required just to produce them? If you answered yes to these questions, this web site is for you. This site contains downloadable games, game templates, and utilities that teachers and trainers can use to enhance any lesson. Download the Games: PowerPoint Games | Excel Games | Word Games | Timers Why these Templates and What's Available? Everybody Wins - the Book Want to learn more about using digital games like these to enhance teaching and learning? Click here to learn more about the book, and premium template web site.

10 Awesome Web Tools Teachers should Be Using Educational Technology and Mobile Learning is back to you with another list of some great educational websites. We have meticulously handpicked this compilation and we want those of you who, because of their time constraints or any other reasons, could not keep up with the sweeping influx of the web tools to have a chance to get to know some useful tools to use both for their professional development and with their students as well. You can also check our archive for other compilations. Have a look at the list below and share with us your feedback Training Games thiagi.com Freebies Training Games This section contains more than 400 ready-to-use training games and activities. Most of them were published in the Thiagi GameLetter.

Adapt Your Gamification Designs with Jesse Schell’s Four Pillars Adapt and Evolve Your Gamification Through Jesse Schell’s Four Pillars of Design Jesse Schell describes in his brilliant book The Art of Game Design the four pillars that is comprised of a game: Technology, Aesthetics, Mechanics, and Story/Narrative. When gamifying a process it is smart not to overlook any of the pillars. After all, we’re now in the experience economy and Gamification might be your killer app when enhancing customer or employee engagement: A major difference with designing a game and gamifying a process is that a game designer tends to start from scratch. A gamification process already has a group of people, a corporate culture, a company brand etc.

Turn your picture into Cartoon Using Choggers Chogger is an awesome comic strip building platform. It looks like Pixton and Make Beliefs but offers extra services. Choggers has a good editing tool that allows users to create their own cartoons out of imported photos. Users can even hook on their camera and snap images to edit on Chogger.

Learn Irregular Verbs with Engames and Fluency MC I have already published 10 posts on teaching irregular verbs. You can see the list of the posts down here: But I still cannot say that my students know the verbs. That was why I joined forces with Fluency MC, and this time we would like to teach the irregular verbs together.

The Pedagogy of Play and the Role of Technology in Learning The goal of the videogame “Civilization” is to build a civilization that stands the test of time. You start the game in 4000 B.C. as a settler and, with successful gameplay, can create a civilization that lasts until the Space Age. Throughout the game, you need to manage your civilization’s military, science, technology, commerce and culture. One doesn’t read “The Decline and Fall of the Roman Empire” to develop strategy before playing the game. Dr. Rod Ellis: TESOL Written Corrective Feedback - matbury.com Professor Rod Ellis, gave a presentation which is available on YouTube.com. In it, he focuses on written corrective feedback. I’ve written a basic summary below. 25 Online Games for English Language Learners GameZone: Dozens of simple, straightforward games about grammar, spelling, and vocabulary reach out to English language learners at all levels. Keep in mind, however, that this site is based in the U.K. and follows a different set of linguistic rules than American English.Vocabulary.co.il:This series of vocabulary and games runs the gamut from elementary to high school levels of proficiency. Each is recommended for both native speakers as well as students learning English as a second or third (or more) language.Power Words:PBS’ WordGirl and her simian sidekick Captain Huggy Face do battle against Fair City’s most sinister citizens, but it’s up to players to determine the course of the action.