Sketchlot - Create a sketch Online, share it with students 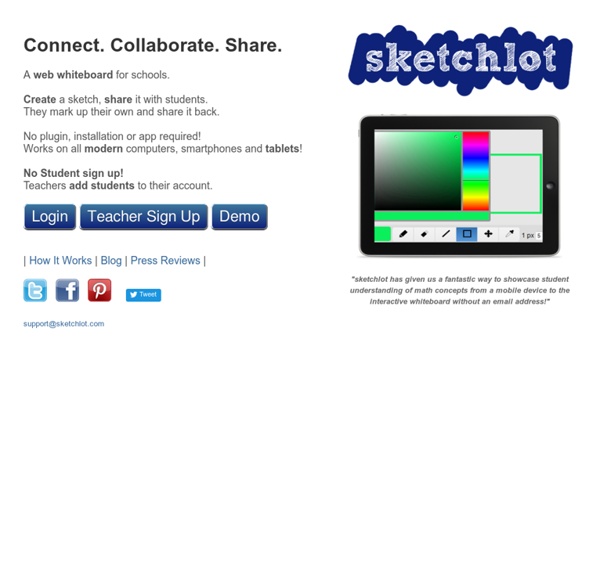 25 Useful Brainstorming Techniques by Celes on Feb 9, 2009 | ShareThis Email This Post Caught with a problem you cannot solve? Need new ideas and solutions? English Lessons with Adam - Learn English with Adam [engVid] "That'll be 66 cents please." "Sikysi... what?" Having a hard time understanding native speed English? This lesson will give you some tips on how to sound like a native speaker as well as how to understand what you hear by breaking down expressions into their individual word and sounds.

Press Space or double-click to edit Capture ideas at the speed of thought – using a mind map maker designed to help you focus on your ideas and remove all the distractions while mindmapping. Create unlimited mind maps for free, and store them in the cloud. Your mind maps are available everywhere, instantly, from any device. Brainstorm, create presentations and document outlines with mind maps, and publish your ideas online and to social networks.

Study English News.com - Read the news in easy English Episodes of 'The Flatmates' from BBC Learning English <a href=" of the flatmates do you like the most?</a><span style="font-size:9px;">(<a href=" surveys</a>)</span> Here is a collection of episodes of The Flatmates, from the BBC's learning English website. You can follow the adventures of the main characters in different real life situations and read what they are saying to help you understand. This is a great way to improve your English listening comprehension.

Mind Maps®: Learning Skills from MindTools.com A Powerful Approach to Note-Taking (Also known as Mind Mapping, Concept Mapping, Spray Diagrams, and Spider Diagrams) "Mind Map" is a trademark of the Buzan Organization (see www.buzan.com). We have no association with this organization. Record ideas memorably with James Manktelow & Amy Carlson. MAP The Data Sheet lists all geopolitical entities with populations of 150,000 or more and all members of the UN. These include sovereign states, dependencies, overseas departments, and some territories whose status or boundaries may be undetermined or in dispute. More developed regions, following the UN classification, comprise all of Europe and North America, plus Australia, Japan, and New Zealand. All other regions and countries are classified as less developed. The least developed countries consist of 48 countries with especially low incomes, high economic vulnerability, and poor human development indicators; 34 of these countries are in sub-Saharan Africa, 13 in Asia, and one in the Caribbean.