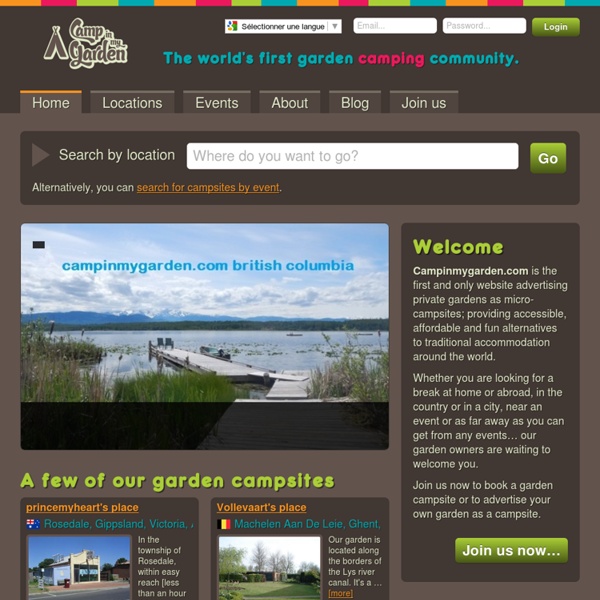 Campinmygarden.com is the first and only website advertising private gardens as micro-campsites; providing accessible, affordable and fun alternatives to traditional accommodation around the world. Whether you are looking for a break at home or abroad, in the country or in a city, near an event or as far away as you can get from any events… our garden owners are waiting to welcome you. Join us now to book a garden campsite or to advertise your own garden as a campsite. Join us now…

A Treatment for Silnylon Floors A note from the author: Silicone impregnated nylon ("silnylon") is one of the most interesting of the high technology fabrics that's been introduced to the outdoor products industry over the past several years. So interesting, in fact (at least to me), that I'm currently working on a separate article entitled "Silnylon: The Inside Story" that will discuss this material's history, physical properties, manufacturing processes and legal issues. This first piece is more narrowly focused and deals primarily with silnylon's use in backpacking tent floors, an application for which, as it turns out, it's not particularly well suited. Nevertheless, because several ultralight shelter manufacturers are using silnylon as a flooring material, and since buyers frequently complain about the associated problems (often through Internet discussion forums), I decided to document this do-it-yourself treatment that can serve as a single solution to this fabric's three primary floor-related problems.

Baliem Valley - Independent Trekking - Lonely Planet travel forum I've spent almost two weeks talking with the guides and locals and wandering around in the mountians alone. Here's what I've learned. Maps The Japanese guy who runs the internet cafe (Papua.com) sells a half decent map of the area. He prints it out on nice photo paper which looks good, but doesn't hold up in rain so I'd make a few photo copies of it. I wouldn't use this alone for trekking around, but its good to give you a basic idea of where you'll be going and it makes a good gift.

English - Paalkamperen Twickel - Overijssel Welcome to my website about camping locations in the Netherlands! Unfortunately the Netherlands, like most European countries, has outlawed camping in the wild. However, a number of designated camping spots throughout the Netherlands offer a similar experience. On these campsites you can stay one or more nights for free, without needing to check in anywhere. You're likely to be the only one there and many of the spots can only be reached on foot. SOTO Muka Multi-fuel Gas Stove Requires no priming! The Muka Stove has revolutionized common understanding of a gasoline stove’s characteristics such as becoming dirty with soot, cumbersome preheating, and maintenance before and after use. This gas stove combines a reliable, powerful output and ease of care. Made in Japan

Edgelands: Journeys into England's True Wilderness by Paul Farley and Michael Symmons Roberts – review Other nations have their deserts, jungles and tundra, but where is Britain's wilderness? Our countryside has been carefully shaped by human hand. Even our apparently untamed moorlands owe their character to the demands of sheep, deer and grouse production. Black Sea The Black Sea is a sea in Southeastern Europe. It is bounded by Europe, Anatolia and the Caucasus and is ultimately connected to the Atlantic Ocean via the Mediterranean and the Aegean Seas and various straits. The Bosphorus Strait connects it to the Sea of Marmara, and the Strait of the Dardanelles connects that sea to the Aegean Sea region of the Mediterranean. These waters separate eastern Europe and western Asia. The Black Sea is also connected to the Sea of Azov by the Strait of Kerch.

Pocket Shower Pocket Shower When a cold beer is just an unattainable dream at least you can douse your desire by having a shower! The Pocket Shower uses the same heat resistant waterproof fabric and roll top closure as our standard Dry Sacks. At the base there is a compact and free-flowing rose that smoothly and gradually adjusts from off to full flow with a simple twist. Fill with water, roll it closed, suspend it from the two tough Delrin™ D-rings using the 6 metres of cord provided. Click and go: the best travel websites ever Fabulous accommodation holidaypad.net If you want to stay in a flying-saucer-shaped cabin in Wisconsin, a windmill on Santorini or a house in the Lake District that featured on Grand Designs, Holiday Pad will sort you out. You can't book directly, so think of it more as inspiration, with links to the websites of unique, unusual places to stay across the globe. i-escape.com We probably mention this lip-smacking site most weeks, but it is our first port of call for gorgeous boutique accommodation around the world. Lots of photos, honest reviews by writers that list what's good and bad about the properties, tons of detail on the place and surroundings, rates through the season and a mix of mid-range to high-price luxury properties make it one of the best out there. And though they're not cheap, they're not all eye-wateringly expensive either.

Travel and The Private Library (Part IV) - The Private Library Fragmentary accounts of travel date back to shortly after the invention of writing, but most historians credit Herodotus' descriptions of his travels in Egypt and Anatolia as the beginning of the genre. (Because Herodotus was researching what happened during the Persian wars, he also is credited with creating another genre, History.) Pausanias' Description of Greece, a ten-volume treatise written circa 160 CE for Roman travelers to that area, is the earliest known travel guidebook. Although other early "guidebooks" would follow... ...most early travel writing was travelogues or essays, penned by such famed travelers as Zhang Qian, Pliny the Elder and Ibn Battuta. (We will examine this subgenre in more detail in tomorrow's post.)