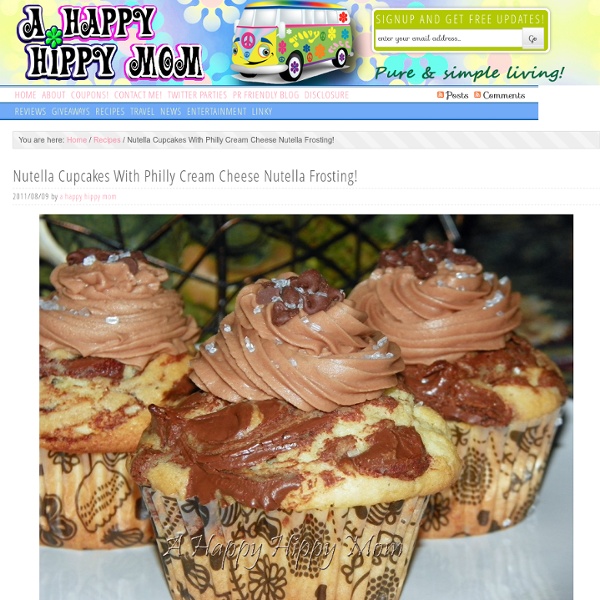 My daughter is a Nutella freak and just loves the creamy chocolaty spread! She would take a jar of it to school and her classmates would pass it around during lunch and eat it straight from the container. Probably not the most sanitary thing to do, but teens live for the moment and don’t put much thought into that kind of stuff. I wanted to bake my daughter something special, so I decided to search for recipes using Nutella and found Self Frosting Nutella Cupcakes at Baking Bites. Nutella Self Frosted Cupcakes 10 tbsp(140 grams) butter, softened 3/4 cup white sugar 3 eggs 1/2 tsp vanilla 1 3/4 cups (200 grams) sifted all purpose flour 1/4 tsp salt 2 tsp baking powder Nutella, approx. 1/3 cup Preheat oven to 325F. I followed the recipe using exact measurements and the cupcakes came out looking gorgeous. Philly Cream Cheese Nutella Frosting 8 oz Philadelphia Cream Cheese at room temperature 2 tablespoons unsalted butter at room temperature 1/4 cup powdered sugar 2 oz Nutella

Margarita Cupcakes & Masshole Mommy Hey, there’s wrong with a little booze in your cupcakes every now and then, right? Admittedly, I’m not much of a baker, but every now and then I can pull off something that’s just pure awesomeness. Hence these amazing margarita cupcakes. They’re a little bit of work, but trust me, these are well worth it. I think they’re perfect for a night with the girls – or do what I do, down about six of them on a stressful day after the kids are in bed. This recipe combines the best of both worlds: eating sweets and booze. Scalloped Hasselback Potatoes “Scalloped” is an attractive word, isn’t it? When I hear it I think of several things: first, there’s scallops, as in the seafood—totally delicious. Then there’s the scalloped shape that can live on the edge of a pair of shorts or on the collar of a woman’s blouse—always pretty and dainty. And of course scalloped potatoes also comes to mind, which carries my imagination to a land of crispy potato skins drenched in a sea of cheese and cream. I can think of no better place to exist, actually.

Handle the Heat » White Chocolate-Macadamia Nut Cookie Dough Blondies I hope you’re still enjoying my new site design! Today’s recipe actually comes from The Cookie Dough Lover’s Cookbook which was written by Lindsay, the same woman who designed my website. When the book arrived at my house from Amazon, I practically drooled over every page. Design Crush & Popsicles! Not to sound full of myself, but I’m pretty sure this is the be all, end all of popsicle roundups. There’s a little something for everyone: the foodies, the purists, the ones who prefer frozen yogurt, the ones who prefer a little alcohol, everyone. Tweny-five options to be exact. Nutella Creme Brulee It’s that time again! I know I can hardly contain myself. I think about this Challenge ALL month. I’ve had a million different ideas floating through my head trying to decide what to make. And, believe it or NOT, I didn’t decide until late Wednesday night what to do!

Stephanies Kitchen – Snickerdoodle Cupcakes w/Cinnamon Cream Cheese Frosting - StumbleUpon My kids have been running around the house like chickens with their heads cut off. Tornados really. I don’t know if it is because we got our usual winter snowstorm in early spring, or if they are just tired of being in the house. Maybe a combination of both. Make Your Own Girl Scout Cookies Make Your Own Girl Scout Cookies, Sans The Artificial Ingredients Whether you want to avoid some of the highly-processed ingredients (like trans fats and palm oil) or you just can’t wait for the annual cookie sale, we’ve got some simple ways to make healthier versions of these classic treats. Why Make Your Own Though Girl Scout cookies boxes say “trans-fat free,” the term is officially defined by the FDA as a food that contains less than 0.5 grams of trans fat per serving, meaning some varieties — including uber-popular Thin Mints, Samoas and Tagalongs — still contain trace amounts of the fat. The giveaway: Look for “partially-hydrogenated” on the ingredient list. That ingredient list also contains palm oil and preservatives — your homemade ones will just taste better. 2 Recipes, 5 Different Girl Scout Cookies Many of the favorite Girl Scout cookies begin with the same base: The classic shortbread cookie.

Chiles Rellenos Recipe Thanks for the recipe & deseeding/frying tips! I'm Chicana but I have only attempted the chile relleno (my *favorite* Mexican food) a couple of times, due to the many steps! After stuffing 3 peppers &, I got inspired to deconstruct this further, and made a sort of chile pancake (egg foo young?). Put the egg stuff in the pan, topped with chopped (roasted, peeled) chile, minced onion; flipped to cook the other side, topped with more onion, lots of cheese, and topped with enchilada sauce. Make and Takes - StumbleUpon It’s September, so apples are on the brain, can you tell? With apple cards, candy apples, yarn apples, I can’t seem to get enough. Well, as I was browsing Pinterest, which I’m addicted to, I came across this post from Muses of Megret on baking your cupcakes into Valentine hearts. It’s such a cute and clever way to bake these! It sparked a thought that this method would also make the perfect shape for an apple as well. So here are apple cupcakes, cute as ever!

it ain’t broke, but This recipe, I admit, is a little gimmicky. It’s reminiscent of an overplayed commercial featuring bad lighting and the latest, greatest idea: the snuggie, for instance (like a blanket, except it has armholes!), or perhaps the clapper (clap on! clap off!). This recipe, unlike those commercials, has the advantage of Martha Stewart (or at least her brand) proclaiming its virtues.