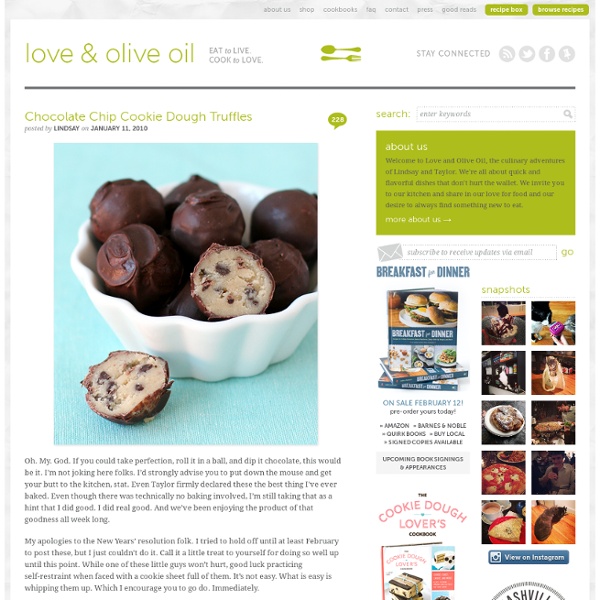 Oh. My. God. If you could take perfection, roll it in a ball, and dip it chocolate, this would be it. I’m not joking here folks. I’d strongly advise you to put down the mouse and get your butt to the kitchen, stat. My apologies to the New Years’ resolution folk. The cookie dough itself is egg-free, and potentially dairy free AND vegan if you get picky about what you coat them with. Take it or leave it (but I strongly suggest you take it. Update: Since it was first posted in 2010, I’ve updated this recipe and included it in my new cookbook, The Cookie Dough Lover’s Cookbook (Quirk Books, 2012). You may also like...

Oreo Fudge Bars Well, first of all, I’m having a fantastic time in New York, even if it is our third time here in three years. We were in the city for one night, then Brooklyn for 2 nights, and now we’re visiting some of Kramer’s family in Westchester. I should also mention that Kramer and I got engaged on January 2nd while in Central Park! We won’t be getting married until after I graduate from school (December 2009), but we’re going to enjoy our engagement for now and that’s plenty of excitement for me. The Infamous Jacques Torres Chocolate Chip Cookies Now, I have a chocolate chip cookie recipe that I swear by. I love it, I think it is incredible, and I haven’t changed my mind about that. However, as much as it pains me to say it, these chocolate chip cookies by Jacques Torres are absolutely, without a doubt, the best chocolate chip cookies that I have ever made or tasted in my entire life. I guess that’s why they call him Mr.

Homemade Oreos I almost never repeat recipes. I have soooo many recipes bookmarked and dog eared that it just doesn't make sense to bake the same thing twice. This recipe is the exception. Chocolate Ganache-Stuffed Cookies… You see these cookies? They look like pretty average, plain ‘ol cookies, don’t they? Well. You’re in for a treat, my friends, because these are NO average cookies! These have a special secret lurking within…just waiting to be discovered. All it takes is one bite…………. Coca-Cola Cupcakes I don’t drink coca-cola. But I do eat it. Weird. Yeah, I dunno. It’s way better eaten.

Lookie at my Cookies: Peanut Butter Cup Brownies April 1, 2009 • Ariel and Whitney Eat your heart out Reese’s, there’s a new peanut butter cup in town. I am convinced peanut butter and chocolate were made for each other, like Charlie and Claire on LOST–I’m only on Season 2 right now but someone please tell me they have gotten together. Nutella-Mallow Pillow Pockets When I tell you this, take me very seriously…..run, don’t walk to your nearest grocery store and make these today! I knew I wanted to make a Nutella treat the other day and when this simple idea came to mind I had no idea how crazy good it would be! The pastry with the gooey disappearing marshmallow and nutella make for a treat that you just must try for yourself!

Meet the Personal Chef of Pot Jonesing for some gourmet tri-tip and a solid buzz? Check out Cannabis Catering, a San Francisco-based outfit that specializes in marijuana cuisine. The brainchild of Chef Frederick Nesbitt, a California Culinary Academy-trained chef who has worked as personal chef for Jerry Rice and John Madden, Cannabis Catering offers four and five-course meals laced with ganja.

Salted Chocolate “Twix” Bars We’re watching our friend’s cat right now, and it’s a lot of fun. Kramer and I want to get a pet so badly, but I just don’t think that I have the time, energy, or, frankly, money, to take care of an animal the way I would like to. For now, though, it’s just fun to pretend to have a pet for a week. His name is Eddie and he’s pretty funny. I’ve never had a cat before, but Kramer grew up with them so he’s more accustomed to their behavior than I am. Sweet Pea's Kitchen - StumbleUpon Graham Cracker S’mores Cookies Graham Cracker S’mores Cookies with a graham cracker base, topped with a chocolate chip marshmallow cookie and chopped Hershey’s bars on top. If you are a fan of s’mores, watch out!

The Brownie That Will Change Your Life Let me start off by saying that viewer discretion is advised for today’s post. OK now with the story that preludes possibly the greatest brownie I have ever sunk my teeth in thus far in my life. Last Saturday Mrs. Dark Chocolate Guinness Cake with Bailey’s Buttercream Makes an 8″ layered cake So here we are, cooking the world A-Z… and I come across this epic Irish cake. I make this adaptation and… just like that – my life is complete. I don’t have time to do my hair or makeup, but – I promise you – I’ll always have time for this cake. It’s rich and dark, like an Irish sky at midnight… brightened by sweet, sweet Bailey’s buttercream, which gilds everything like moonlight. The perfect pair.