The Best Chocolate Sheet Cake. Ever. 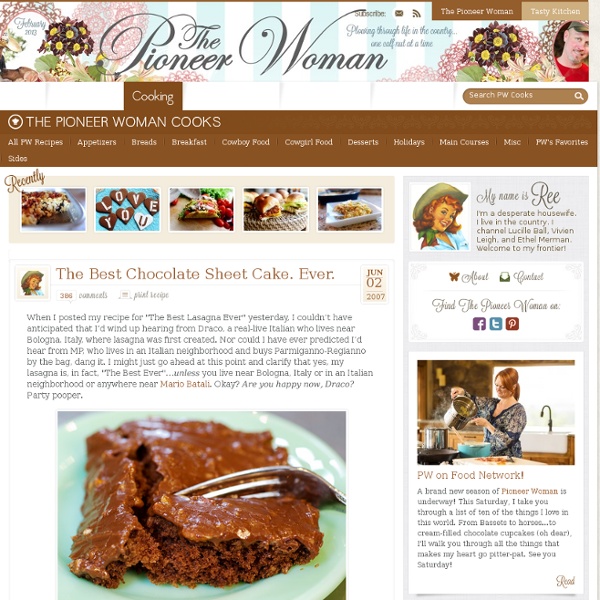 When I posted my recipe for "The Best Lasagna Ever" yesterday, I couldn’t have anticipated that I’d wind up hearing from Draco, a real-live Italian who lives near Bologna, Italy, where lasagna was first created. Nor could I have ever predicted I’d hear from MP, who lives in an Italian neighborhood and buys Parmiganno-Regianno by the bag, dang it. I might just go ahead at this point and clarify that yes, my lasagna is, in fact, "The Best Ever"…unless you live near Bologna, Italy or in an Italian neighborhood or anywhere near Mario Batali. Okay? Are you happy now, Draco? Party pooper. Now…this cake? The Cast of Characters. First, melt 2 sticks regular (not unsalted) butter in a saucepan. When the butter is melted, add 4 heaping tablespoons cocoa powder… And mix thoroughly. With the heat still on, pour in the boiling water… And allow the mixture to bubble for 30 seconds. Turn off heat. In a large mixing bowl, combine 2 cups flour, 2 cups sugar… And 1/4 teaspoon salt. Stir together. Stir together…

Spaghetti with Sauteed Chicken and Grape Tomatoes This recipe was inspired by the abundance of tomatoes and basil in my garden. These grape tomatoes are so sweet and addicting. Toss them with some low carb pasta and diced chicken and you have a delicious, healthy meal in less than 20 minutes. Frito Chili Pie We’re submerged in football right now. There’s no other way to put it. Marlboro Man is coaching my two boys’ football team, Marlboro Man and I are both tuned in and watching all the college games we can find on TV…and if that wasn’t enough, we’ve also gone to some of our local high school’s home games on Friday night. There’s nothing like high school football games to send you soaring back to adolescence. The cool almost-fall night air…the shirtless guys painted with their team’s colors…the adorable cheerleaders, who, by the way, have way more energy than I remember having at seventeen…the Bon Jovi songs blasting on the loudspeaker in between plays. Is there some kind of requirement that high school football games pipe Bon Jovi until the end of time?

Pumpkin Roll with Vanilla Bean Cream Filling One can never have enough pumpkin recipes (at least this "one" can't). I love me some pumpkin! This is a spicy pumpkin cake roll, filled with a vanilla bean filling. (think hostess cupcakes gone Thanksgiving) My dear friend and fellow foodie blogger Danielle first turned me onto this little jewel last year. If memory serves me correctly, she got the original recipe from a food network show and kindly spread the word.

Nutella Biscuit Recipe Nutella Drop Biscuits Nutella fans, I have a special treat for you today. Nutella Drop Biscuits. Easy homemade biscuits with Nutella swirled in. How good does that sound? Let me tell, you REAL good. Flourless Chocolate Cake with Chocolate Glaze Best Chocolate Cake Ever: Chocolate Sour Cream Cake with Fudgy Frosting Chocolate cake unlike any you've made before: Fudgy, tender, and moist are just some of the adjectives that describe this must-try cake recipe. See our step-by-step process! bhg.com How to Make Our Best-Ever Chocolate Cake When you are craving a really good chocolate dessert reach for this recipe and make our best-ever chocolate cake.

Cinnamon Vanilla Sugar Overnight Baked French Toast When I was a kid, my mother kept a bowl of cinnamon sugar in her cupboard. She made it herself mixing a tablespoon or two of cinnamon into a cup of granulated sugar. As kids, we would take big slabs of her homemade bread, toast it, butter it, and sprinkle cinnamon sugar over the top. It was one of our favorite treats. We would also sprinkle it over our oatmeal in the morning. Nendran Chips Recipe (Nendran Banana Chips) Nendran chips always reminds of kerala chips where they use coconut oil for making chips. I love its flavour the best.I have not seen many kids who are so specific in snacks too and the lil one is in the list. She is not fond of biscuits, cakes, sweets etc, she asks for cream biscuits licks the cream clean and reserves the biscuits for her mother ;)

Holiday Cherry Cheesecake Recipe Preheat oven to 350 degrees F. For crust, combine flour and brown sugar. Cut in shortening until fine crumbs form and add 1/2 cup of nuts to crust, and 1/2 of the coconut into crust mixture. Mix well and remove 1/2 cup of the crust mixture and set aside with the remaining nuts and coconut. This will be used for the topping. Press the crust mixture into a pie pan.