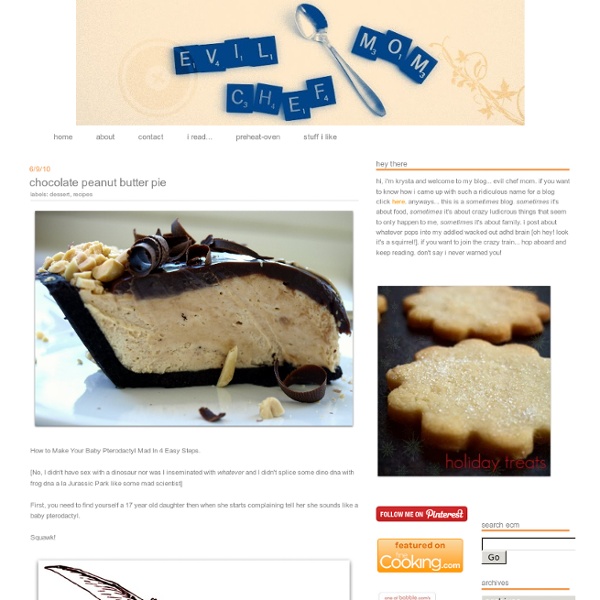 How to Make Your Baby Pterodactyl Mad In 4 Easy Steps. [No, I didn't have sex with a dinosaur nor was I inseminated with whatever and I didn't splice some dino dna with frog dna a la Jurassic Park like some mad scientist] First, you need to find yourself a 17 year old daughter then when she starts complaining tell her she sounds like a baby pterodactyl. Squawk! That looks about right. Second, embarrass her by telling a family friend that when she was younger she didn't have an ounce of gaydar in her whole entire body. "Slander!" Three, repeat the gaydar thing to the internet. Can you hear the squawking? Four, don't make this pie when you say you are going to make this pie. I then got this face. chocolate peanut butter pie: adapted from dangerous desserts edited by orlando murrin 1 chocolate cookie crust (I used an Oreo pre-made crust) filling: 1 cup cream cheese 2/3 cup smooth peanut butter 4 tablespoons sugar 3/4 cup whipping cream topping: optional: chopped peanuts chocolate curls ShareThis

Chunky Chocolate Cheerios This is one of the most delicious if not the greatest chocolate dessert of all time. Really. Rudolph the Red-Nosed Reindeer knocked on Santa’s front door. Santa: “Who’s there?” Rudolph: “It’s me, Rudolph.” Santa: “What do you want, Rudolph?” Freezing in the cold Rudolph replies: “Ch-ch-ch…” Santa: “You want WHAT?” Rudolph: “Chunky Chocolate Cheerios!” And that, ladies and gentlemen, is why I don’t normally tell any jokes because they tend to be terribly lame! It all started rather innocently on a day that I had this whacky idea to add some Cheerios to the White & Dark Chocolate Peanut Butter Chunks recipe of mine. I posted the recipe along with this by now familiar photo and that was that. Not quite. Always a bit stumped when it comes to gifts I wondered whether gifting these delightful nibbles would work. People went bonkers for it! Chunky Chocolate Cheerios sold out week after week when I ran a stall at the local farm shop. Adds crunch. If you can find another cereal that can do that, go ahead!

Lincoln’s Red Velvet (Cheesecake) Cake Wednesday, April 7, 2010 Lincoln’s Red Velvet (Cheesecake) Cake Psssst…. there’s a surprise inside this pale exterior! Oh yeah! I spent a LOT of time thinking about “Lincoln’s Cake” (which is what I always referred to it as when discussing it). When it came down to choosing the actual recipes I would follow, I wanted sources I trusted. Now for some notes on the structure and assembly of this gorgeous cake. Now, you probably want to know what this tastes like, right? I know I don’t usually write this much, but this cake was just so delicious, and surprisingly easier than I expected. This cake was so delicious and stunningly beautiful, I did something I’ve NEVER done before. (Love the idea of this cake, but are you more of a chocolate & peanut butter person? **Update** I’ve gotten so much great response on this cake, and I greatly appreciate when readers comment saying they’ve made the cake. Commenter #48 Amber’s cake: Commenter #49 Patrick’s cake: Reader Joyce’s cake, Christmas version!

Some More Please! pumpkin cheesecake w/ nutella ganache When you go to bed at night, as soon as you hit the pillow, do you get all these pop up bubbles of thoughts of the day of what you didn't do or what you should have done? I hate that. Well, most nights I hate that. But last night I didn't hate. I am back to kind of loving Top Chef Desserts. pumpkin cheesecake w/ nutella ganacherecipe by dawn finicaneprint recipe crust1- 10 oz box of Lorna Doone shortbread cookies, crushed fine (I used all 2 sleeves)1 stick salted butter, meltedTiny pinch of sea salt1 ts vietnamese cinnamon cheesecake filling4 - 8 oz. packages of cream cheese, room temp¾ cup granulated sugar¼ cup heavy cream (maybe a little less)3 large eggs and 2 large egg yolks1 cup plus 3 TB pumpkin puree1 ts of pure vanilla extract1 ts cinnamonCouple dashes of pumpkin pie spice mix (use as much as you like; I’m not fond of it, so I used very little) cook notes:as I said above I should have used the milk chocolate chips instead of the bittersweet chips.

Snickerdoodle Muffins Last Friday I finished my exams and was planning on coming home and having a baking extravaganza, but then I tripped on my cat and fell down the stairs. We're both fine, though I think he's a lot more fine than me because as soon as I felt his soft body under my foot I took all my weight off of him and slid down the stairs. Which has left me with a swollen foot. I recently discovered the insane deliciousness of snickerdoodle cookies. As for how they turned out, the muffins were incredibly moist and a great sour cream muffin texture. Snickerdoodle Muffinsslightly modified from Culinary Concoctions by Peabody 2 sticks unsalted butter1 cup sugar2 tsp vanilla2 eggs3/4 tsp baking soda3/4 tsp baking powder3/4 tsp cream of tartar3/4 tsp freshly grated nutmeg1 1/4 cup sour cream2 1/4 cups all purpose flour 1/2 cup sugar and 1 TBSP cinnamon mixed together for rolling* 1.Cream the butter and sugar until soft about 3 to 5 minutes. 4.

Salted Caramel Brownies I first fell in love with salted caramel back on a chilly January day this past winter. It was a Friday. The night before, my Chief Culinary Consultant and I went to a Pens/Caps game (we won’t discuss the result), and he was in town and off the next day. So we did what we do best – we went shopping. We were making our way around town when we passed a cupcake shop and I’m pretty sure I was adamant about stopping in. Somehow it took me until now to actually make salted caramel instead of traipsing around eating it in the form of frosting. And if that weren’t enough, there’s more good news. If you received the Brown Eyed Baker weekly newsletter last week then you know the weekly baking challenge was… brownies! One year ago: Dulce de Leche Cheesecake SquaresTwo years ago: Zebra Cake

Crêpes with Cream Cheese Filling Crepes are a beloved kind of dessert over here – in our monkey household. They make the days brighter and happier. I don’t really know how but it works! Here’s a little idea on how to make crepes a little different than usual – why not fill them with a wonderful cream cheese filling! It’s beyond delicious. And beyond simple. Come and have a look at how I made them… These are the ingredients that I’ve used. I bet you have them all in your pantry right now. Right? 1. At least the one I make. You just throw the eggs, flour, milk, water, sugar, and a pinch of salt into a bowl… 2. If there’s any more elaborate way how to prepare the crepe batter I never want to know. Never! I can perfectly survive with this amount of knowledge. 3. Pour some vegetable oil in since we don’t want our crepes to stick to the pan. Place the pan over medium heat and let it stay there until it’s rather hot or until a few sprinkles of water dropped on the pan splatter. 4. 5. 7. 9. Yum! At this point it is important to be very strong.

Butterbeer recipe | Chica and Jo UPDATE: I’ve tweaked this recipe based on more research done at Universal. Be sure to take a look at our updated Butterbeer recipe to see the new ingredient! I’ve been a huge Harry Potter fan since the second book came out and my husband brought it home on the recommendation of a co-worker. I stayed up until the wee hours in the morning with my eyes bugged out so I could finish reading the first and second books. So we were very excited when we had the opportunity this summer to visit the Wizarding World of Harry Potter at Universal Studios. As fun as it was that day, it was also hot. On that hot afternoon, I preferred the frozen version (a slushie consistency) but I liked the regular drink a little bit better overall. The mugs were really cute as well. But how would I make the mug? I picked out some really pretty glass mugs that I wanted to use, making sure that were big enough for my stencil, which measures about 4″ x 2-3/4″. Start by thoroughly cleaning your mugs with rubbing alcohol.

Red Velvet Cheesecake Brownies Sometimes, red velvet cakes are known more for their brilliant coloring than they are for their flavor because it is easier to simply make the cake look fancy than put together a great recipe. Flavor is unquestionably the most important thing for a baked good to have, but it sure doesn’t hurt to have a “wow” factor on top of that. These Red Velvet Cheesecake Brownies definitely have an impressive look and a delicious combination of flavors to back it up. Red velvet cake usually has a hint of both cocoa and buttermilk flavors to it and gets most of its color from the addition of red food coloring. For these brownies, I opted to leave out the buttermilk to keep a fudgy, brownie-like texture and add just enough food coloring to give these normally chocolate-colored brownies a deep red hue. Red velvet cake is also usually topped off with a cream cheese frosting. 8-oz cream cheese, room temperature 1/3 cup sugar 1 large egg 1/2 tsp vanilla extract Preheat oven to 350F.

Crazy Domestic: Popsicle Brownies Here's a super fun and easy idea for kids or for a summer party! My daughter's eyes were as big as saucers when she saw these! WHAT YOU NEED:•1 box brownie mix or your favorite homemade recipe•almond bark•food coloring•popsicle sticks•sprinkles HOW TO DO IT:1. Make the brownies according to the directions and let them cool completely.2. To have your ideas featured on Crazy Domestic, click HERE Project Food Blog Challenge 7: Videos – Classic, Contemporary and Crazy | Tiffin Tales As a food blogger, you have to wear multiple hats – cook, stylist, photographer, writer, editor. Last week, thanks to the seventh Project Food Blog challenge* , which is to demonstrate a recipe on video(!), I added director, actor, videographer and film editor to that list. But let’s get to the crux of this video challenge, which is not me, but the recipes. I’ve watched, edited and re-edited these until I was sick of the sound of my own voice. Bon Appetit! The Classic – French Crepes Click here for complete recipe – French Crepes (Music Credit and Copyright (Creative Commons): Pitx / CC BY-NC 3.0 ) The Contemporary – Tiramisu Crepe Cake Click here for complete recipe – Tiramisu Crepe Cake The Crazy – Me (Music Credit and Copyright (Creative Commons): Teru ) *Thank you everyone for the overwhelming love and support – I am so grateful and couldn’t do it without all your amazing feedback.