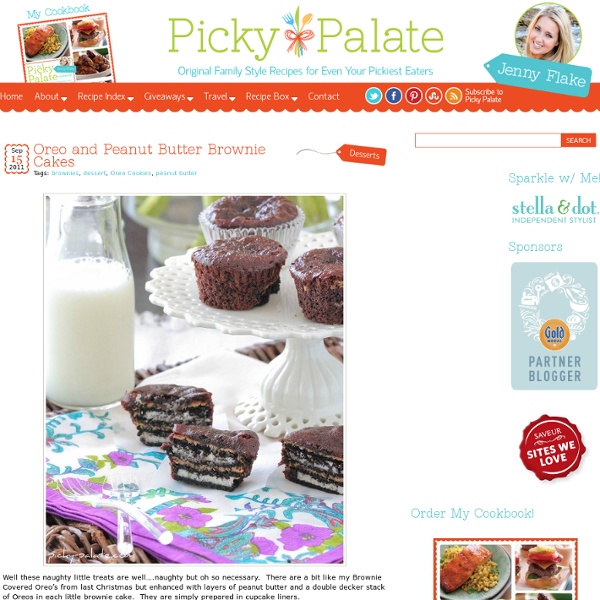 Well these naughty little treats are well….naughty but oh so necessary. There are a bit like my Brownie Covered Oreo’s from last Christmas but enhanced with layers of peanut butter and a double decker stack of Oreos in each little brownie cake. They are simply prepared in cupcake liners. Hope you enjoy this ultra sweet little cake Ok, I have to brag about this brownie mix from Trader Joes for a second. I know not everyone has a Trader Joes near by, however if you do, get a load of their ready to pour baking mix. Break out 24 Oreo Cookies. Some of your favorite peanut butter. Spread a teaspoon of peanut butter over Oreo #1. Press a second Oreo right on top One more teaspoon right on top. Place the little stack right into a cupcake lined muffin cup. Like so Take your brownie mix…. …and spoon a couple tablespoons right over top, letting it run around the edges of the cookies. Mmmm! Ahhhh, wait until you cut them in half. Oreo and Peanut Butter Brownie Cakes 1 box brownie mix, 8×8 inch size 1. 2.

Grilled Avacado Guacamole © Jerry James Stone via iPhone Guacamole is one of my favorite things. I admit, I have eaten tacos made only of guacamole and a tortilla. While I don't stray from my favorite guacamole recipe often, this one has a nice smokiness to it that's a great fit for fajitas or anything grilled. Raspberry Cheesecake Cupcakes If you enjoy cheesecake, then you will love these cupcakes. They consist of cheesecake with a graham cracker crust, a layer of homemade raspberry jelly, and are topped with cream cheese whipped cream. Can you say yum? The Best Chocolate Chip Cookie Recipe The search for the absolute best chocolate chip cookie recipe has ended with the New York Times Chocolate Chip cookie recipe adapted from Jacques Torres I think it’s pretty fair to say that when most of us think of making chocolate chip cookies, we look on the yellow Nestle bag for the Toll House Cookie recipe. Recently my friend Kim had a chocolate chip cookie fail! She asked me “What happened? What did I do wrong“ I made a few suggestions off the top of my head, but it got me thinking. I wanted to search for the BEST, no fail, Chocolate Chip Cookie recipe.

Mac and Cheese Cups Share this image Share It Pin It When I first graduated from college, and was living in a dreary little apartment, mac and cheese was one of my few specialties. Granted it was straight from a box, but it was one of those meals that made me feel like I was home. 10 AWESOME Nutella Recipes Ten awesomely delicious recipes using your favorite chocolate hazelnut spread, Nutella: Nutella Rice Krispy Treats get thisNutella Rice Krispy Treats Stefanie FauquetNutella Recipes Nutella Cupcakes Raspberry and Serrano Sangría : TreeHugger - StumbleUpon © Jaymi HeimbuchPhotos by Jaymi Heimbuch It's no secret. I ♥ the combination of berries and chili peppers, much like the salsa I made earlier this week using just that. And after receiving some jalapeño-raspberry jam from Ann's Raspberry Farm, I was inspired to make an encore. Also, it's worth noting that Ann won a Good Food Award this year for their commitment to naturally grown food. But they could have won just on taste alone.

Death By Oreo Cupcakes They are probably the best Oreo cakes I have ever tried. A lot of cake's that I have experimented with before are like a vanilla cake with bits of Oreo in them, which didn't really give them enough Oreo flavor. But these were a lot better. I used a dark chocolate fudge cake mix instead of just a regular chocolate cake mix, which went really well with the cookies and gave the cakes just a little more flavor. So, in this recipe there is Oreo's in the cake, in the frosting, and at the bottom is a Oreo surprise. That's right, you put a whole Oreo at the bottom of the cake.

Martha Stewarts Cookies and Cream Cheesecakes Recipe Posted by Grace Massa Langlois on Wednesday, 21st July 2010 I have yet to meet a person who doesn’t like Oreo cookies or Cream Cheesecake Cupcakes. Who could resist cream-filled chocolate sandwich cookies? Not Me! Especially the double-stuffed Oreo cookie, it’s one of the best cookies for dunking into a cold glass of milk. I went out yesterday to do my weekly shop, came home, and before I was able to bring in the first grocery bag Matt was hunting for the cookies and cream ice cream.

Caramel Tart-Caramel Tarts-Chocolate Tart-Chocolate Tarts-Pasta Frolla Posted by Grace Massa Langlois on Friday, 8th July 2011 When I finally decided on Lemon Meringue Tarts for the holiday weekend I knew I would have to offer another choice because not everyone in my family is a fan of citrus desserts. It didn’t take me too long to decide on the other option because everyone in my family loves chocolate. I decided immediately to pair the chocolate with luscious caramel.

Brown Butter Double Fudge Chocolate Chip Cookie Dough Cookies Little bit of a mouthful there. But it’s like a cookie on top of another cookie! Yeah. Baked French Toast with Honey-Poached Blueberries © Jaymi HeimbuchPhotos by Jaymi Heimbuch This is my secret weapon when it comes to breakfast in bed. It is simple to make, tasty and it looks like you put in a lot of work.