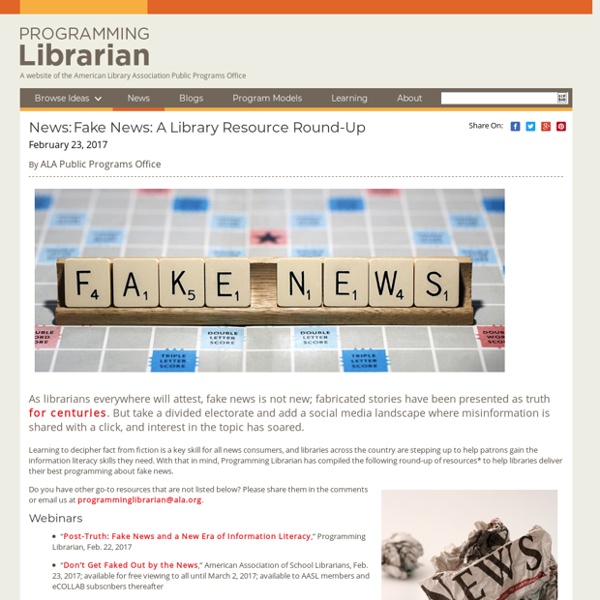 Getting Out of the Filter Bubble: Finding The Real You Online I recently had a great (and timely) conversation with one of the counselors from International School Manila at the EARCOS Teacher’s Conference in Kota Kinnabalu, Malaysia (check out all the resources from all of my sessions here). She said: “I wish there was a way to help students recognize what their online profile looks like to other people. They often think what they’re posting is great, but it can be hard for them to view it through someone else’s eyes.” How Fake News Goes Viral: A Case Study Eric Tucker, a 35-year-old co-founder of a marketing company in Austin, Tex., had just about 40 Twitter followers. But his recent tweet about paid protesters being bused to demonstrations against President-elect Donald J. Trump fueled a nationwide conspiracy theory — one that Mr. Trump joined in promoting. Mr. Tucker's post was shared at least 16,000 times on Twitter and more than 350,000 times on Facebook.

How fake news gets into our minds, and what you can do to resist it Although the term itself is not new, fake news presents a growing threat for societies across the world. Only a small amount of fake news is needed to disrupt a conversation, and at extremes it can have an impact on democratic processes, including elections. Read more: We made deceptive robots to see why fake news spreads, and found a weakness But what can we do to avoid fake news, at a time when we could be waiting a while for mainstream media and social networks to step up and address the problem? From a psychology perspective, an important step in tackling fake news is to understand why it gets into our mind.

Digital content curation: For students! – Kay Oddone – Medium Originally published on LinkingLearning I’ve been a fan of digital content curation for a long time. I’ve blogged about it on many occasions; first waxing lyrical about Diigo way back in 2011, then celebrating the new year in 2013 by suggesting resolutions to use curation to manage content overload and then reflecting on curation as an art form more recently. Home - Fake News and Alternative Facts: Finding Accurate News - LibGuides at Austin Community College What is Fake News? According to the fact-checking website, Politifact, "Fake news is made-up stuff, masterfully manipulated to look like credible journalistic reports that are easily spread online to large audiences willing to believe the fictions and spread the word." Types of Fake News

Fake news leaves a lasting impression on the less smart By Alex Fradera One reason why fake news is dangerous is that we don’t like giving up reassuring certainties, and once we have a take on things, it colours further information – hence the seeming bulletproof nature of conspiracy theories and partisan political hatreds. But new research in Intelligence suggests this is truer for some people than others. The Future of Free Speech, Trolls, Anonymity and Fake News Online Many experts fear uncivil and manipulative behaviors on the internet will persist – and may get worse. This will lead to a splintering of social media into AI-patrolled and regulated ‘safe spaces’ separated from free-for-all zones. Some worry this will hurt the open exchange of ideas and compromise privacy

IFLA Statement on Fake News The phenomenon of ‘fake news’ has risen to prominence in many countries, regularly appearing in political debate. IFLA is concerned by the risk that this can pose to access to information, where people do not have the skills to spot it, but also by the way it is used by governments to justify potentially repressive policies. The Chair of the IFLA Advisory Committee on Freedom of Access to Information and Freedom of Expression, Martyn Wade, said 'Freedom of access to information is a right of all, and the increase in activities intended to deliberately mislead citizens leads inevitably to damaging everyone's human rights'. This statement sets out IFLA's position on fake news, and makes recommendations to governments and libraries.

How did the news go ‘fake’? When the media went social The Collins Dictionary word of the year for 2017 is, disappointingly, “fake news”. We say disappointingly, because the ubiquity of that phrase among journalists, academics and policymakers is partly why the debate around this issue is so simplistic. The phrase is grossly inadequate to explain the nature and scale of the problem. (Were those Russian ads displayed at the congressional hearings last week news, for example?)