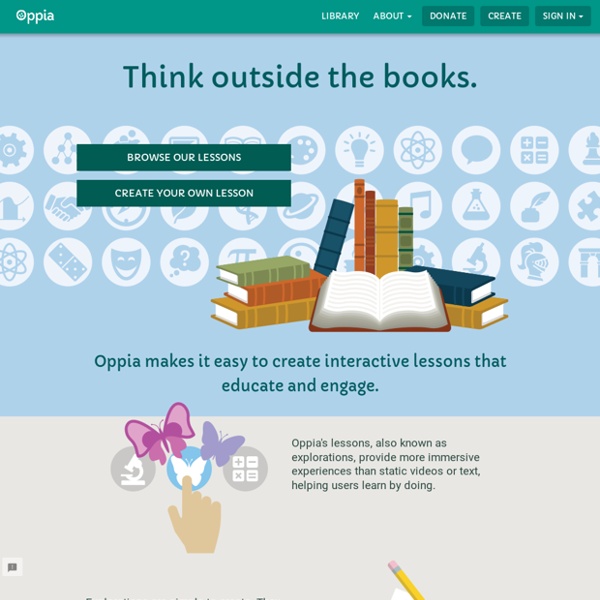 Robotutor No human teacher can keep up with thousands of students in massive open online courses. Smart software can now stand in, offering personalised guidance TENS of thousands of students across the world will log in to online classrooms this week. A large portion of them will be learning to write code in computer science courses. Using Google Drive To Teach Close Reading One of the Language Arts Common Core standards is that students are expected to read text closely to determine what the meaning is and any inferences that can be drawn from it. As an English major in college reading and analyzing text was well-drilled in me. I had to use the text to support my observations and analysis. I did not have a good foundation in this from my schooling prior to college and had to learn it as a new skill in my freshman year. Close reading is an explicit skill that needs to be taught to students.

9 tools for creating great animations Creating animations has always been considered as one of the most complex aspects of graphic design that requires specific software and technological expertise. It is a time-intensive activity that requires heavy software and high speed computers. However, over the past few years, the emergence of different online presentation and animation tools have simplified the process of creating animations. Most of these web-based tools are very easy to operate and can create animations that are perfectly suitable for everyday applications. 50 Free Animation Tools And Resources For Digital Learners 50 Animation Tools & Resources For Digital Learners by Lisa Chesser, opencolleges.edu.au A purple monster with wild curls spiraling out of control explains the economics of oil production in the Sudan to students in Los Angeles, Sydney, Berlin, Jerusalem, and Riyadh.

How to Use JASP - JASP - Free and User-Friendly Statistical Software Welcome to the JASP Tutorial section. Below you can find all the analyses and functions available in JASP, accompanied by explanatory media like blog posts, videos and animated GIF-files. Click on the JASP-logo to go to a blog post, on the play-button to go to the video on Youtube, or the GIF-button to go to the animated GIF-file. News Corp. Education Tablet: For The Love Of Learning? hide captionJoel Klein, former New York City schools chief, left to run News Corp.'s education division. On Thursday, Amplify announced a specially designed education tablet.

Nexus Q, Nexus 7: Google Puts Personal Cloud In 'Play' Are Nexus 7 and Nexus Q bound to sweep the personal cloud prime time? Image: Courtesy of Google Google doubled down on the consumer cloud on Wednesday at Google I/O, where it unveiled the expected Nexus 7 tablet and the unexpected Nexus Q, which connects the new Google tablet and other Android smartphones to your TV. While the Android Jelly Bean/4.1-packin’ Nexus 7 ($199) will get the immediate fanfare (as it is sure to be called an iPad a Kindle Fire killer), the $299 Nexus Q completes the personal cloud circle for Google Play, which as we noted here at Cloudline when it launched, “With Google Play, the Cloud Goes Prime Time.” Google’s Joe Britt, describing how the media-streaming Q acts as a “cloud-connected juke box,” gets to the killer device aspect of the Q: “No messy authentication or else.” Britt, stealing a line from somewhere, notes: “It just works.”

101 Web 2.0 Teaching Tools Online tools and resources have made it easier for teachers to instruct students, and for students to collaborate with those teachers and with other students and parents. These “Web 2.0” teaching tools aren’t magical, but they may seem to defy definition at times since they save time, help you to stay organized, and often take up little space on a computer. Some of these applications are Web-based, which means that they can be accessed from any computer. The following list is filled with tools that will make a teacher’s, or those enrolled in the best online education programs, life easier.

Here Is A Great Platform to Help You Personalize Students Learning July 3, 2016 Gooru is an excellent educational platform that allows teachers to create personalized learning experiences for their students through remixing and sharing collections of digitally curated content on any K-12 topic. ‘With millions of free multimedia resources, quiz questions, and data analytics, Gooru makes it easy for teachers to address individual students’ needs.’ Gooru provides teachers with a number of tools to gauge students learning in realtime. Teachers can create formative assessments and track progress for the whole class. Based on collected feedback, teachers can create unique coursework to address specific learning needs for their students.

Founder of Lynda.com Talks About Future of Learning Online (Video) - Kara Swisher - Media To Lynda Weinman, it’s funny that the online learning site she and her husband founded in 1995 suddenly seems like an overnight success. “Yes, only two decades in the making,” she joked at a lunch I had with her last week. But there certainly has been a big buzz around Lynda.com — named after Weinman — after the Carpinteria, Calif., company raised $103 million a month ago in its first major funding. And, last week, as part of a major expansion globally using that money, it bought Austria-based video2brain to add to its online course offerings in a range of computer and other skills, in a number of European languages. It’s all part of the plan to dominate the continuing education market, and to bring 60 more employees and a pile of lessons to a service that competes with a range of others, such as Codecademy and Treehouse in the business and computer learning space. Currently, Lynda has 83,000 videos in 1,500 courses, and close to 500 employees.

Flipboard Makes the Leap to Android, Widgets and All When it comes to winnowing the Web down to what matters, Flipboard has led the charge - at least on the iPhone and iPad. The popular app, which curates social streams and Web content into a customized digital magazine, has remained an iOS exclusive until now. We spoke with Flipboard co-founder Evan Doll about the social magazine's hop onto Android and how apps such as Flipboard help us stay sane as the social Web streams by. After both an official and an unofficial beta gave Android users a taste of the hit social magazine app, Flipboard is out in the wild - for real this time. You can now download Flipboard for Android in the Google Play store (rather than sideloading it, as the beta necessitated). Flipboard for Android will come bundled on all new Samsung Galaxy S III smartphones across the four major U.S. carriers, but the app is now available for the ecosystem at large.

The 35 Best Web 2.0 Classroom Tools Chosen By You 100 Web 2.0 Tools Every Teacher Should Know About 44.24K Views 0 Likes We're always trying to figure out the best tools for teachers, trends in the education technology industry, and generally doing our darnedest to bring you new and exciting ways to enhance the classroom. But I wanted t... Should 'real' students do an online course on the side? Universities have started giving away their content free as "massive open online courses", with the satisfyingly ridiculous acronym mooc (I challenge you to say it three times with a straight face). Eleven top UK universities recently announced they were joining the Open University to launch FutureLearn, in a bid to catch up with the elite US institutions that have led the way in teaching huge numbers online. It all sounds great for people who, for one reason or another, can't go to a traditional university. But do moocs have anything to offer students already studying at a bricks-and-mortar institution? People like me, who hate the niggling feeling that they might be missing out on a bargain? Well, I've signed up for a mooc in microeconomics.

EDU is now a part of Google Apps for Education GlogsterEDU has been announced as one of the applications found on the Google Chromebook’s Education App Pack: a set of apps recommended by the schools, teachers and users for a richer educational experience, at ITSE 2012! At ITSE, new features have been introduced to make Chromebook easier to manage in all aspects (including finding, managing, installing and using apps in your school). So what features are included? Grade-level application packs which are groups of Chrome Web Store apps which are organized by grade level and are connected to Google’s suite of Apps for Education.

Oppia is cool when you only have one answer for your subject. I, coming from religious education, am used to get different answers which are not just right or wrong. So, oppia is fine for maths and physics, maybe for vocabulary tests or so. by deuxpont Aug 2

This is new, started by Google. Have to play with it some more to truly understand what it is about. by monikakern Mar 25