HISTORY OF THE HOLOCAUST - TIME LINE. Return to Table of Contents The Nazi party takes power in Germany. 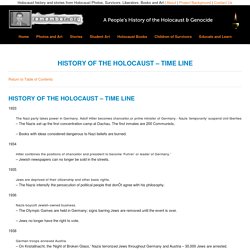 Adolf Hitler becomes chancellor,or prime minister of Germany.- Nazis ‘temporarily’ suspend civil liberties – The Nazis set up the first concentration camp at Dachau. The first inmates are 200 Communists. – Books with ideas considered dangerous to Nazi beliefs are burned. Hitler combines the positions of chancellor and president to become ‘Fuhrer’ or leader of Germany.’ – Jewish newspapers can no longer be sold in the streets. Jews are deprived of their citizenship and other basic rights. – The Nazis intensify the persecution of political people that donÕt agree with his philosophy.

Nazis boycott Jewish-owned business. – The Olympic Games are held in Germany; signs barring Jews are removed until the event is over. – Jews no longer have the right to vote. German troops annexed Austria. – On Kristallnacht, the ‘Night of Broken Glass,’ Nazis terrorized Jews throughout Germany and Austria – 30,000 Jews are arrested. The Jewish Victims of the Holocaust : Linda Jacobs Altman : 9780766019928. This new series delivers an original design, a high page count with larger print and a lower-reading level than Enslow's The Holocaust Remembered Series. 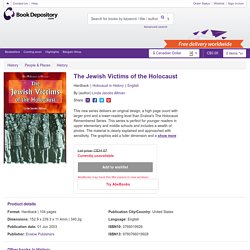 This series is perfect for younger readers in upper elementary and middle schools and includes a wealth of photos. The material is clearly explained and approached with sensitivity. The graphics add a fuller dimension and a broader understanding of the subject matter. These titles contain a chronology, chapter notes, a further reading list, Internet addresses, a glossary, and an index.The atrocities of the Holocaust and its millions of Jewish victims are discussed with detail and sensitivity by author Linda Jacobs Altman. Moments in History: Why did the Holocaust happen? by Sean Sheehan - 9780750283991 - QBD The Bookshop. Learn about the Holocaust, a genocide of devastating proportions, perpetrated by the German government during World War II. 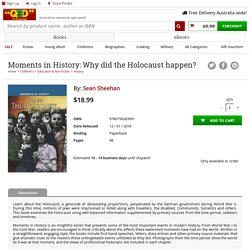 During this time, millions of Jews were imprisoned or killed along with travellers, the disabled, Communists, Socialists and others. This book examines the Holocaust using well-balanced information supplemented by primary sources from the time period, sidebars and timelines. Moments in History is an insightful series that presents some of the most important events in modern history. From World War I to the Cold War, readers are encouraged to think critically about the effects these watershed moments have had on the world.

Written in a straightforward, engaging style, the books include first-hand speeches, letters, diary entries and other primary source materials that give dramatic clues to the reasons these unforgettable events unfolded as they did. Holocaust Books for Teens. SummaryHelen and Alfons were born just miles from each other, but while Helen went to Auschwitz, Alfons became a member of the Hitler Youth. 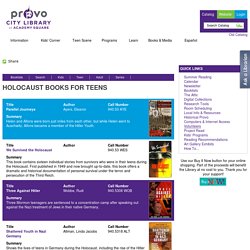 SummaryThis book contains sixteen individual stories from survivors who were in their teens during the Holocaust. First published in 1949 and now brought up-to-date, this book offers a dramatic and historical documentation of personal survival under the terror and persecution of the Third Reich. SummaryThree Mormon teenagers are sentenced to a concentration camp after speaking out against the Nazi treatment of Jews in their native Germany. Holocaust Books for Young Adults. European history. Holocaust, Hebrew Shoʾah, Yiddish and Hebrew Ḥurban (“Destruction”), “Smoke”© Pucker Gallerythe systematic state-sponsored killing of six million Jewish men, women, and children and millions of others by Nazi Germany and its collaborators during World War II. 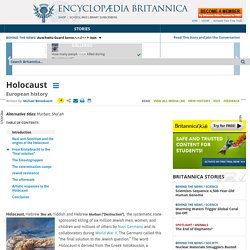 The Germans called this “the final solution to the Jewish question.” The word Holocaust is derived from the Greek holokauston, a translation of the Hebrew word ʿolah, meaning a burnt sacrifice offered whole to God. This word was chosen because in the ultimate manifestation of the Nazi killing program—the extermination camps—the bodies of the victims were consumed whole in crematoria and open fires. Nazi anti-Semitism and the origins of the Holocaust Germany: exclusion of the JewsContunico © ZDF Enterprises GmbH, MainzEven before the Nazis came to power in Germany in 1933, they had made no secret of their anti-Semitism. As discrimination against Jews increased, German law required a legal definition of a Jew and an Aryan.

33 Facts You Should Know About the Holocaust.