Children of the Holocaust. Anti-Jewish Boycott. Part I - Holocaust Introductory Background Information. Anti-Jewish Legislation in Prewar Germany  Photograph. Nyt-hitler-ioc-olympics-1935. File:Proclamation about Jews in German-occupied Belgium.jpg. Anti-Jewish Legislation. RGBL_I_1935_S_1145. File:Nuremberg laws.jpg. The development of anti-Jewish laws - The Holocaust Explained Website. Encouraged by centrally organised discrimination, local people, employers and organisations in towns and villages all over Germany began to victimise Jews and expel them from employment and to deny them membership of cultural and leisure organisations. 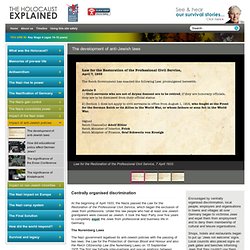 Shops, hotels and restaurants began to put up ‘Jews not welcome’ signs. Local councils also placed signs on park gates and benches informing Jews that they couldn’t use them. Gradually the civil rights of Jews across Germany were taken away – for example: being banned from being members of sports clubs in April 1933 and not being able own a dog in May 1942. At the beginning of April 1933, the Nazis passed the Law for the Restoration of the Professional Civil Service, which began the exclusion of Jews from professions.