Voices of the Holocaust 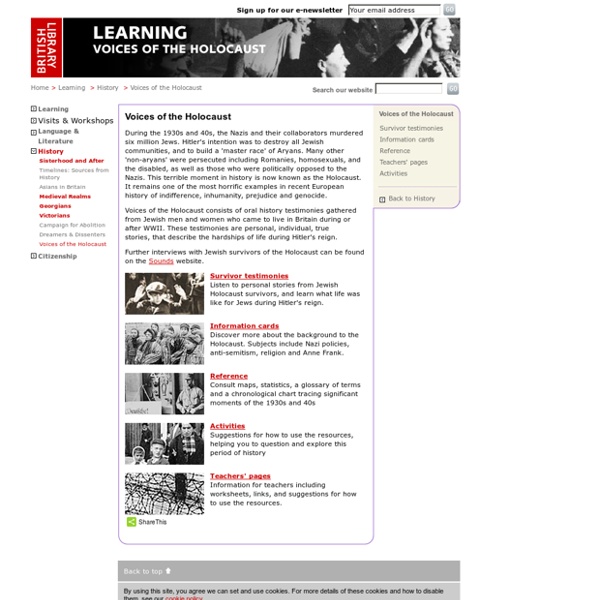 During the 1930s and 40s, the Nazis and their collaborators murdered six million Jews. Hitler's intention was to destroy all Jewish communities, and to build a 'master race' of Aryans. Many other 'non-aryans' were persecuted including Romanies, homosexuals, and the disabled, as well as those who were politically opposed to the Nazis. This terrible moment in history is now known as the Holocaust. It remains one of the most horrific examples in recent European history of indifference, inhumanity, prejudice and genocide. Voices of the Holocaust consists of oral history testimonies gathered from Jewish men and women who came to live in Britain during or after WWII. Further interviews with Jewish survivors of the Holocaust can be found on the Sounds website. Survivor testimonies Listen to personal stories from Jewish Holocaust survivors, and learn what life was like for Jews during Hitler's reign. Information cards Discover more about the background to the Holocaust. Reference Activities ShareThis Related:  Where to find information - History. General resources • HOLOCAUST

Holocaust Timeline Jump to: 1938 1939 1940 1941 1942 1943 1944 1945 1933 January 30, 1933 - Adolf Hitler is appointed Chancellor of Germany a nation with a Jewish population of 566,000. February 22, 1933 - 40,000 SA and SS men are sworn in as auxiliary police. February 27, 1933 - Nazis burn Reichstag building to create crisis atmosphere. February 28, 1933 - Emergency powers granted to Hitler as a result of the Reichstag fire. March 22, 1933 - Nazis open Dachau concentration camp near Munich, to be followed by Buchenwald near Weimar in central Germany, Sachsenhausen near Berlin in northern Germany, and Ravensbrück for women. March 24, 1933 - German Parliament passes Enabling Act giving Hitler dictatorial powers. Terms of use: Private home/school non-commercial, non-Internet re-usage only is allowed of any text, graphics, photos, audio clips, other electronic files or materials from The History Place.

Digitised Manuscripts Almost 900 Greek manuscripts and some of the most important papyri, ranging in date from the first to the 18th centuries, are now included in the Digitised Manuscripts site. The first two phases of the Greek Manuscripts Digitisation Project were generously funded by the Stavros Niarchos Foundation and the third phase was funded by the Stavros Niarchos Foundation, the A. G. Leventis Foundation, Sam Fogg, the Sylvia Ioannou Foundation, the Thriplow Charitable Trust, and the Friends of the British Library. A guide to the Greek Manuscripts collections, including articles, videos and collection highlights, is available here. Over fifty Thai manuscripts and the Chakrabongse Archive of Royal Letters have been digitised with the generous support of the Royal Thai Government, in celebration of the occasion of the eightieth birthday anniversary of His Majesty King Bhumibol Adulyadej of Thailand on 5 December 2007.

What was the Holocaust? - Key Stage 3 - The Holocaust Explained The Holocaust (Shoah) was a unique event in 20th century history. It evolved slowly between 1933 and 1945. It began with discrimination; then the Jews were separated from their communities and persecuted; and finally they were treated as less than human beings and murdered. During the Second World War the Nazis sought to murder the entire Jewish population of Europe and to destroy its culture. In 1941 there were about 11 million Jews living in Europe; by May 1945 the Nazis had murdered six million of them. One-and-a-half million of these were children. We now call these events the Holocaust. Whilst the Jews of Europe were the Nazis’ primary target, many millions of other people were also imprisoned, enslaved and murdered. The Nazis did not act alone. Now you have read the introduction to the Holocaust you can begin to explore The Holocaust Explained web resource.

Teaching Salvaged Pages: Young Writers' Diaries of the Holocaust Moshe Ze’ev Flinker was born in The Hague on October 9, 1926, and was raised in an Orthodox Jewish home. After being subjected to increasingly restrictive anti-Jewish measures following the German occupation of the Netherlands in 1940, the Flinker family fled to Belgium in 1942. In Belgium, Moshe and his family were able to pass as non-Jews with the help of false identity papers and relative anonymity. Moshe was a deeply religious young boy who grappled with the theological problems posed by the unprecedented persecution of the Jews. In April 1944, after being betrayed by a known Belgian Jewish collaborator, Moshe, his mother, and his sisters Esther Malka and Leah, were arrested at their home and deported to Malines. Two weeks later, Moshe’s father was caught and sent to Malines, where he found his family. Esther Malka and Leah survived Auschwitz-Birkenau and were reunited with their four siblings in Brussels after the liberation.

Introduction to the Holocaust The Holocaust was the systematic, bureaucratic, state-sponsored persecution and murder of six million Jews by the Nazi regime and its collaborators. Holocaust is a word of Greek origin meaning "sacrifice by fire." The Nazis, who came to power in Germany in January 1933, believed that Germans were "racially superior" and that the Jews, deemed "inferior," were an alien threat to the so-called German racial community. During the era of the Holocaust, German authorities also targeted other groups because of their perceived "racial inferiority": Roma (Gypsies), the disabled, and some of the Slavic peoples (Poles, Russians, and others). Other groups were persecuted on political, ideological, and behavioral grounds, among them Communists, Socialists, Jehovah's Witnesses, and homosexuals. WHAT WAS THE HOLOCAUST? Although Jews, whom the Nazis deemed a priority danger to Germany, were the primary victims of Nazi racism, other victims included some 200,000 Roma (Gypsies). Further Reading