That Kick. TIL how to take a shortcut in the mall. Fish trust. Jumping and Flipping over a House. I'm so bored - close call. Comercial Chevrolet - Aguacero 2007 Medellin. How to make bread. Skateboarding Level - Expert. Weatherman pronounces 'Llanfairpwllgwyngyllgogerychwyrndrob-wllllantysiliogogogoch' flawlessly on live TV - Trending. Without Googling it, would you have even the slightest idea of how to pronounce the name of this Welsh village? 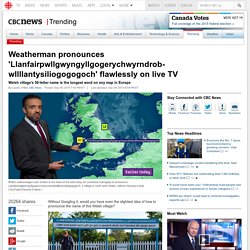 The sign outside a train station in Llanfairpwllgwyngyllgogerychwyrndrobwllllantysiliogogogoch, Wales is five posts — and 58 letters — long. (REUTERS/Toby Melville) "Llanfairpwllgwyngyllgogerychwyrndrobwllllantysiliogogogoch" in northern Wales was one the U.K.'s warmest locations on Tuesday at 21 C. Great news for the community's just over 3,000 residents — not so much for weather presenters tasked with reporting the news.

While the name of this particular village is sometimes shortened to Llanfairpwllgwyngyll or even Llanfairpwll, Britain's Channel 4 News decided to use the full, 58-letter-long spelling for its Tuesday evening weather forecast. "Today we had a big contrast in temperature across the U.K. ," reported meteorologist Liam Dutton during the program. Conversely, they appear to shower you with praise when you get it right. Good luck remembering the URL. Air Drop. The Jump. A ride on the roof of the metro train. Cyclist level Expert. Talent. Fast Moving Landslide. Ballet balance. Giant Ball out of Control. Very long wave - Surfing in Africa. Sweden vs. Denmark. What 55°C (131°F) in Iraq looks like. I couldn't do this on by best day. Line from Jurassic Park regarding Cecil the Lion.

5 March 2015Last updated at 19:58 ET By Jason Caffrey BBC World Service In the mid-1960s, Australian athlete Reg Spiers found himself stranded in London with no money to buy a plane ticket home. 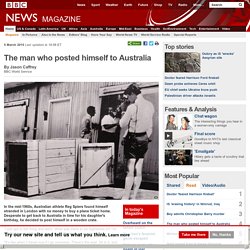 Desperate to get back to Australia in time for his daughter's birthday, he decided to post himself in a wooden crate. "I just got in the thing and went. What was there to be frightened of? I'm not frightened of the dark so I just sat there. GUY HAS SEIZURE WHILE SKYDIVING. Cat Skills. Helicopter precision. CRISTIANO RONALDO IN DISGUISE - ROC. Cristiano Ronaldo surprises a kid on a Madrid's street [FULL VIDEO] Wow! Nice shot. Opening the car window on a cold day. Trailer flip - Close call. Octopus Squeezes Itself through Small Opening. Whistling Language. Russian cat called Masha saves baby abandoned in the cold - World - News - The Independent. The long-haired feline, affectionately named Masha by the block’s residents, discovered the baby boy inside a cardboard box in apartment block in the Russian city of Obninsk after hearing his cries in the cold. 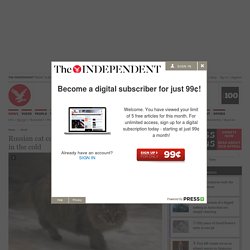 Masha apparently climbed inside the box and wrapped herself around the abandoned child, believed to be less than 12 weeks old, to keep him warm. Hearing Masha’s loud meows, resident Irina Lavrova rushed to rescue the cat believing she was injured – instead she discovered her curled around the now quiet baby. “You can imagine my shock when I saw her lying in a box next to a baby,” she told RT. The baby was rushed to hospital, with Masha attempting to follow the car, and was found to be healthy, despite his outdoors stay. “She was so worried about where we were taking the baby,” paramedic Vera Ivanina told REN TV. The abandoned baby A search has now been launched to try and locate the child’s parents. Man awakens from 12 years in ‘vegetative state’ Text smaller Text bigger Martin Pistorius Martin Pistorious fell into a mysterious coma when he was a vibrant 12-year-old boy in the 1980s. 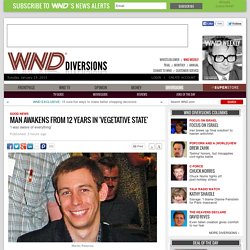 He found himself locked inside his own body – unable to speak, make eye contact or even move his own limbs. Martin’s doctors told his parents, Rodney and Joan Pistorious, that the boy had cryptococci meningitis. They said Martin should be taken home to die in peace. But Martin would live 12 years in that vegetative state. Joan said, “Martin just kept going, just kept going.” Like the reporting you see here?

According to NPR, Martin’s father would wake up every day at 5 a.m., dress the boy, put him in the car and drive him to a special care center. “Eight hours later, I’d pick him up, bathe him, feed him, put him in bed, set my alarm for two hours so that I’d wake up to turn him so that he didn’t get bedsores,” Rodney recalled. Read the heart-wrenching, true story of Terri Schiavo. One day, Joan, in a state of hopelessness, told her son, “I hope you die.” Cool. Small tornado at Rose Bowl.