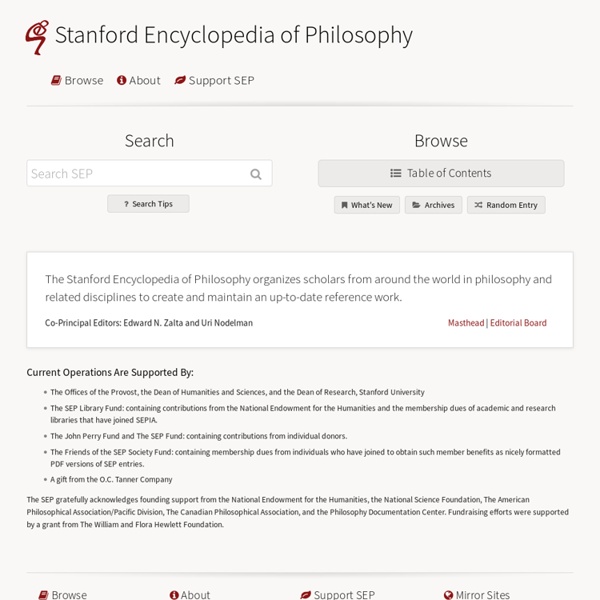 This free online encyclopedia has achieved what Wikipedia can only dream of The Stanford Encyclopedia of Philosophy may be the most interesting website on the internet. Not because of the content—which includes fascinating entries on everything from ambiguity to zombies—but because of the site itself. Its creators have solved one of the internet’s fundamental problems: How to provide authoritative, rigorously accurate knowledge, at no cost to readers. It’s something the encyclopedia, or SEP, has managed to do for two decades. Colonel Dunlap's Coup - 93.01 January 1993 A fictionalized essay that has been circulating within the Pentagon offers a blunt warning on several fronts. by Thomas E. Ricks

The life and reign of English kings and queens visualised Primogeniture is a pain. You can spend all your life waiting to be king or queen and then just have a few years on the throne - or you could be ruling for basically all of your life, which is probably a lot of responsibility. Elizabeth II is under a year away from becoming the longest reigning monarch in the history of England or the United Kingdom - Victoria was on the throne for 63 years - with this in mind we were inspired to look at how other post-Norman conquest rulers have lasted. The gold line shows how many years (in decimals) the monarch reigned and the blue shows the years of their life when they were not the country’s monarch. Although it is not quite as straightforward as it seems. One example is Henry VI and Edward IV were duking it out and deposing each other during the Wars of the Roses.

Manifest destiny In the 19th century, Manifest Destiny was the widely held belief in the United States that American settlers were destined to expand throughout the continent. Historians have for the most part agreed that there are three basic themes to Manifest Destiny: The special virtues of the American people and their institutions;America's mission to redeem and remake the west in the image of agrarian America;An irresistible destiny to accomplish this essential duty.[1] Historian Frederick Merk says this concept was born out of "A sense of mission to redeem the Old World by high example [...] generated by the potentialities of a new earth for building a new heaven".[2] Merk concludes: Symbolic Logic Symbolic logic is the method of representing logical expressions through the use of symbols and variables, rather than in ordinary language. This has the benefit of removing the ambiguity that normally accompanies ordinary languages, such as English, and allows easier operation. There are many systems of symbolic logic, such as classical propositional logic, first-order logic and modal logic. Each may have seperate symbols, or exclude the use of certain symbols. Logical Symbols

Contents Andrew Chrucky e-mail: ditext@ditext.com Online Papers and Books Anarchism: The Unfinished RevolutionPhilosophy of Liberal Education Meta-Encyclopedia of Philosophy Links seven outstanding dictionaries and encyclopedias on the internet under one set of entries. Problems from Wilfrid Sellars Comprehensive bibliographies of works by and on Wilfrid Sellars, including many unpublished correspondences. iNFORMATiON FARM: Inside The LC: The Strange but Mostly True Story of Laurel Canyon and the Birth of the Hippie Generation Part 1 “There’s something happening here What it is ain’t exactly clear” Join me now, if you have the time, as we take a stroll down memory lane to a time nearly four-and-a-half decades ago - a time when America last had uniformed ground troops fighting a sustained and bloody battle to impose, uhmm, 'democracy' on a sovereign nation. It is the first week of August, 1964, and U.S. warships under the command of U.S. Navy Admiral George Stephen Morrison have allegedly come under attack while patrolling Vietnam's Tonkin Gulf.

Iconographic Database The Warburg Institute Iconographic Database contains digitised images from the Institute's Photographic Collection and Library. The material for which the Warburg Institute holds the copyrights is licensed under a Creative Commons Attribution-Non Commercial 3.0 Unported License. Search by iconographic keywords or browse the iconographic classification system.To search by artist, date, location, or other parameters, please use the advanced search menu. Dig Deeper into the Scandal Globally, extreme poverty has been halved in 20 years, and could be virtually wiped out by 2030. But much of the progress that has been made is at risk – not because of natural disasters or new diseases, but because of something far more insidious. Analysis by the ONE Campaign suggests that at least $1 trillion is being taken out of developing countries each year through a web of corrupt activity that involves shady deals for natural resources, the use of anonymous shell companies, money laundering and illegal tax evasion. This is not international aid – which is making a tangible difference. Massive sums are being taken out of developing countries’ own economies, preventing them from financing their own fight against extreme poverty, disease and hunger.

How to Make Our Ideas Clear How to Make Our Ideas Clear Charles S. Peirce Popular Science Monthly 12 (January 1878), 286-302. Whoever has looked into a modern treatise on logic of the common sort, will doubtless remember the two distinctions between clear and obscure conceptions, and between distinct and confused conceptions. They have lain in the books now for nigh two centuries, unimproved and unmodified, and are generally reckoned by logicians as among the gems of their doctrine.

Kierkegaard on Our Greatest Source of Unhappiness “How we spend our days is, of course, how we spend our lives,” Annie Dillard memorably wrote in reflecting on why presence matters more than productivity. “On how one orients himself to the moment depends the failure or fruitfulness of it,” Henry Miller asserted in his beautiful meditation on the art of living. And yet we spend our lives fleeing from the present moment, constantly occupying ourselves with overplanning the future or recoiling with anxiety over its impermanence, thus invariably robbing ourselves of the vibrancy of aliveness. In a chapter of the altogether indispensable 1843 treatise Either/Or: A Fragment of Life (public library), the influential Danish thinker Søren Kierkegaard (May 5, 1813–November 11, 1855), considered the first true existentialist philosopher, explores precisely that — how our constant escapism from our own lives is our greatest source of unhappiness.