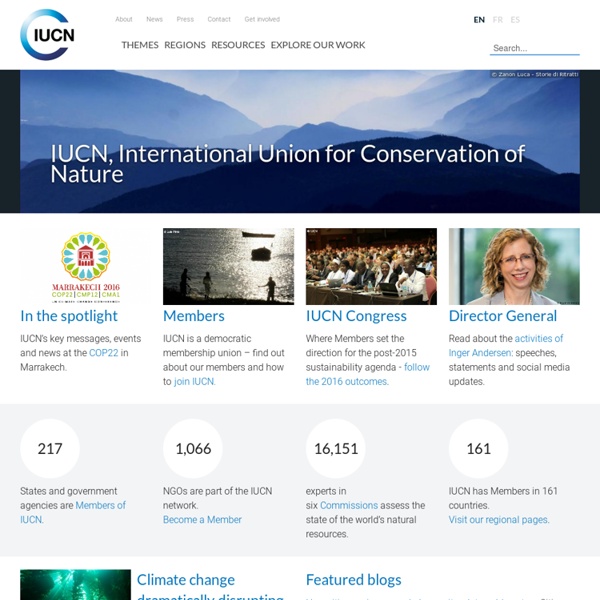 A World without Landfills? It’s Closer than You Think by Jen Soriano Two recipients of this year’s Goldman Environmental Prize are working to abolish the practice of sending trash to landfills and incinerators. And the idea is catching on. posted Apr 17, 2013 Goldman Prize recipient Nohra Padilla at a recycling facility. Photo by the Goldman Prize. There is a growing global movement to significantly reduce the amount of trash we produce as communities, cities, countries and even regions.

We must rip up our environmental laws to address the extinction crisis Humans are causing the Earth’s sixth mass extinction event, with an estimated one million species at risk of extinction. Addressing this crisis requires transformative change, including more effective environmental law and implementation. Improved legislation is one of five main levers for realising change identified in the recent United Nation’s global biodiversity report and the key lesson arising from the Senate’s interim report into Australia’s faunal extinction crisis. Read more: 'Revolutionary change' needed to stop unprecedented global extinction crisis

Module 11: Indigenous knowledge & sustainability Introduction Sophisticated knowledge of the natural world is not confined to science. Human societies all across the globe have developed rich sets of experiences and explanations relating to the environments they live in. These ‘other knowledge systems’ are today often referred to as traditional ecological knowledge or indigenous or local knowledge. They encompass the sophisticated arrays of information, understandings and interpretations that guide human societies around the globe in their innumerable interactions with the natural milieu: in agriculture and animal husbandry; hunting, fishing and gathering; struggles against disease and injury; naming and explanation of natural phenomena; and strategies to cope with fluctuating environments. Source: Nakashima, D., Prott, L. and Bridgewater, P. (2000) Tapping into the world’s wisdom, UNESCO Sources, 125, July-August, p. 12.

One World - One Health™ Fishing Photo ©Mike Kock In September 2004, WCS convened health experts from around the world to discuss the movements of diseases among human, domestic animal, and wildlife populations. Held at Rockefeller University in New York City, the symposium set priorities for an international, interdisciplinary strategy for combating threats to the health of life on Earth.

The Earth Institute, Columbia University Exploring Science in the Field from Pole to Pole Company Donates 330,000 Bed Nets to Help Fight Malaria in Africa Lords of the Past 5 Lessons From The Companies Making Sustainability More Profitable Than Ever Good news for corporate social responsibility leaders: there’s a growing body of evidence that sustainability often goes hand in hand with profits. A new report from MIT Sloan Management Review and the Boston Consulting Group adds even more data to the pile: according to a survey of 2,600 executives and managers around the world, the number of companies that profited from sustainability initiatives climbed to 37%--up 23% from last year. MIT’s paper, The Innovation Bottom Line, is the latest in a series of reports dating back to 2010 that examine sustainability challenges in organizations. Here’s what we learned:

2019 Brazil wildfires Wildfires in Brazil There were at least 75,336 wildfires in Brazil from January to August 23, 2019, which represents the highest number of wildfires since Brazil began to collect data in 2013, according to Brazil's space agency, the National Institute for Space Research (INPE),[2][3] which uses satellites to monitor fires.[4] Over 60 percent of the Amazon is contained within Brazil's borders,[5][6] and over half the wildfires occurred in the Amazon rainforest,[2][7][8][9] the world's largest rainforest which is considered to be "vital to countering global warming."[10][11]

Just Change India - Welcome to JC Just Change ......... A grassroots response to the global economy that has left the vast majority of people powerless, with little or no control over the factors that influence their lives. With growth and financial gain having become the driving force behind all economic activity, this faceless market economy has slowly eroded our sense of community. Just Change has developed an alternative way of doing business that challenges this by allowing producers, consumers and investors to work together in mutually beneficial ways – thus rebuilding the notion of community and regaining power in the marketplace. This radical trade initiative that links the local and global, goes beyond earlier initiatives like the Fair Trade movement and producer cooperatives, that have tried to address the problem of unfair markets. Just Change was born in India among the adivasi people of the Nilgiri Mountains as a response to the crash in tea prices.