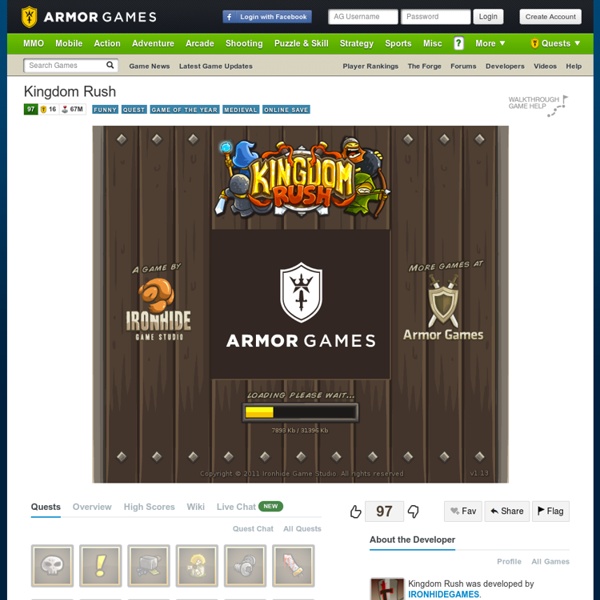 Description The kingdom is under attack! Defend your realm against hordes of orcs, trolls, evil wizards and other nasty fiends; armed with a mighty arsenal of warriors and mages of your own! Fight on forests, mountains, and wastelands. Upgrade your towers with special powers, rain fire upon your enemies, summon additional troops, recruit elven warriors and face legendary monsters. Earn up to 51 achievements and much more in this epic fantasy defense game by Ironhide Game Studio.

Phage Wars Live Description Built on the extremely powerful Betz Biosystems V.2, Phage Wars Live is set up within a testing environment built around genetically modifying viruses. Your goal is to create the most powerful virus ever by defeating all the other genetically engineered viruses in this fast paced, multiplayer strategy game. * NOTE * The server may restart from time to time so some you may be logged out mid game. If you are logged out mid game, try logging back in again a bit later. Black macaque takes self-portrait: Monkey borrows photographer's camera By Daily Mail Reporter Created: 10:08 GMT, 4 July 2011 To capture the perfect wildlife image, you usually have to be in exactly the right place at precisely the right time. But in this instance, David Slater wasn’t there at all and he still got a result. Visiting a national park in North Sulawesi, Indonesia, award-winning photographer Mr Slater left his camera unattended for a while. It soon attracted the attention of an inquisitive female from a local group of crested black macaque monkeys, known for their intelligence and dexterity. Fascinated by her reflection in the lens, she then somehow managed to start the camera.

Top ten hardest games They're tricky, they're testing, they're downright infuriating. They'll make you laugh, they'll possibly make you cry and they'll almost certainly have you coming back for more, just to show them. Just to show them good! cs.virginia A Thoughtful Look at Men and Women SHE DRIVES FOR A RELATIONSHIP. HE'S LOST IN THE TRANSMISSION By DAVE BARRY CONTRARY to what many women believe, it's fairly easy to develop a long-term, stable, intimate, and mutually fulfilling relationship with a guy. Of course this guy has to be a Labrador retriever. With human guys, it's extremely difficult. This is because guys don't really grasp what women mean by the term relationship.

Cool Open Source Games you should contribute to [Update1 20-07-2011] As per numerous requests, the games list has been updated with some more cool games that I’ve missed. They have been prepended to the top of the list and as before, they are in no particular order. While the popular conception when it comes to games for Linux is that they are almost non-existent, this is only true when it comes to big and popular commercial franchises that are backed up by giant video game studios and publishers like EA Games, Blizzard and Konami. On the other hand, Linux(and other platforms like *BSD) benefits from a myriad of open source and free games, some smaller for casual gaming and others more impressive like MMORPG’s and FPS’s that could compete with some of the commercial games out there in their branch either in the current state or given some fresh amount of contribution.

The Radioactive Boy Scout Note: This article is being reprinted here as an example of what NOT to do with radioactive materials. Please do NOT attempt to recreate any part of these experiments for the following reasons: You will most likely poison yourself and/or others Nobody really needs an unsafe homemade reactor (especially one made of duct tape and foil) If enough people try these dangerous experiments, the government will try to outlaw any sort of legitimate private experiments with radioactivity or possession of any radioactive minerals or materials. What happened when a teenager tried a dangerous experiment in his back yard

Yes. This game is a fun Tower Defense by barbebleue Aug 26

Cool, its like a tower defence ? by nicolas Aug 26