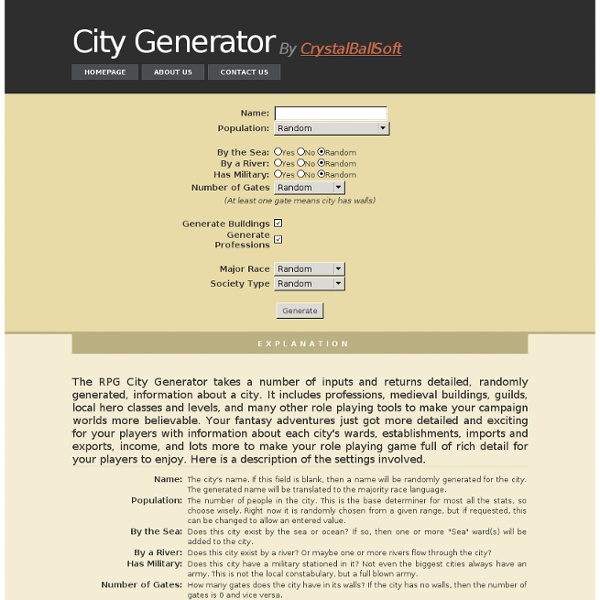 City Generator By CrystalBallSoft Explanation The RPG City Generator takes a number of inputs and returns detailed, randomly generated, information about a city. It includes professions, medieval buildings, guilds, local hero classes and levels, and many other role playing tools to make your campaign worlds more believable. Your fantasy adventures just got more detailed and exciting for your players with information about each city's wards, establishments, imports and exports, income, and lots more to make your role playing game full of rich detail for your players to enjoy.

The Isomage's House Home Contact Cave maps Wilderness hex maps Tabletop Games - Alchemy Ingredients - Character Sheet OSRIC™ - Follower Sheet OSRIC™ - Character Sheet T&T™ 5e - Character Sheet T&T™ 7e The Domesday Book - Medieval Demographics Made Easy The Domesday Book Penned by Brandon Blackmoor, based on Medieval Demographics Made Easy by S. John Ross Here is subscribed the inquisition of lands as the barons of the king have made inquiry into them... Random City Map Generator The Random City Map Generator creates a "random" city or town map suitable for fantasy and other role-playing games (RPGs) such as Dungeons and Dragons, Pathfinder, GURPS, HERO and many others. Note: you can try out version two of this tool. Because the map is made from layered images, to save or print a map you need to either: Take a sceenshot (print screen key) and paste into an image editor; Or print the page to a pdf file (Macs have this built-in, PCs may need a product like "cutePDF".)

Fantasy Name Generator By Samuel Stoddard - Version 1.5 One of the perks of creating fantasy stories -- whether by writing a story or game or by role-playing -- is you get to make up the names. Some people relish the task while others are frustrated by it. Yafnag - Fantasy Name Generator This random name generator provides lists of fantasy names, useful in role-playing games, for World of Warcraft, or in any situation where many names of characters or places are needed. Some links: SOAP server: Yafnag can be used through a SOAP web service (SOAP server). Random Inn/Tavern Generator Current Settings (Because this is a set of separate images, to save the floorplans you should: press your "print screen" key (or your computer's equivalent) and then open your favorite image editor and paste the screenshot into a new image. Then crop the rest of the screen. Some word processors will also allow you to paste the screenshot and even crop it. You can also print the webpage or print it to a pdf file using free tools like CutePDF and PrimoPDF.) Key

GIMP - hexGIMP hexGIMP This script creates a set of layers and an image grid suitable for making TSR-style wilderness hex maps. The brushes included in the distribution were derived from hex art copyright Thorfinn Tait, used with permission (see his site at thorf.co.uk ). The interface is simple: tiles are placed by selecting a terrain or city brush and clicking inside hexes, and rivers, roads, and political borders are drawn by hand.

Now it makes sense :p. Man it's realy hard to put together a RPG table... reminds of good times by cilendil Feb 13

Just makes up some random city details to make the GM's job easier in RPGs/ It's rather D&D specific, though by snowgen Feb 13