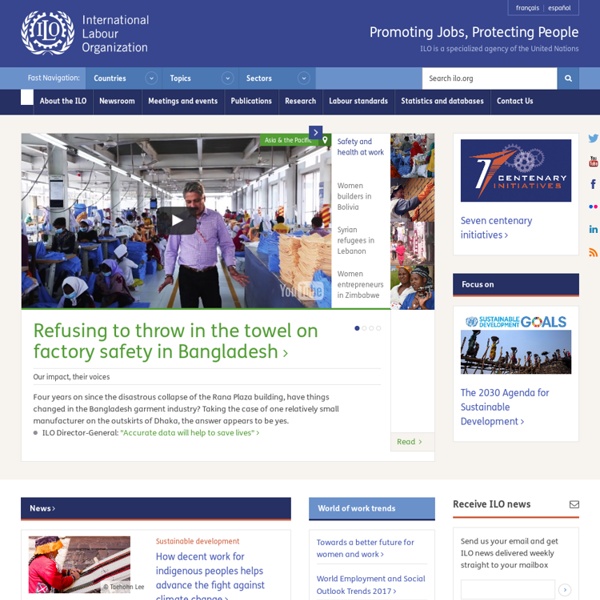 UN to declare famine in parts of drought-hit Somalia 20 July 2011 Last updated at 16:18 GMT An estimated 10 million people have been affected by the drought in east Africa The United Nations has declared a famine in two areas of southern Somalia as the region suffers the worst drought in more than half a century. The UN said the humanitarian situation in southern Bakool and Lower Shabelle had deteriorated rapidly. It is the first time that the country has seen famine in 19 years. Meanwhile, the UN and US have said aid agencies need further safety guarantees from armed groups in Somalia to allow staff to reach those in need.

INCR (Investor Network on Climate Risk (Ceres)) The Investor Network on Climate Risk (INCR) is a network of 100 institutional investors representing more than $11 trillion in assets committed to addressing the risks and seizing the opportunities resulting from climate change and other sustainability challenges. In 2013, INCR turned 10 years old, celebrating a decade of investor action on climate risk. Watch the video below to hear from founding members, Ceres staff and other financial leaders about the impact that investors have had over the past 10 years on corporate responses to climate change, policy advances addressing climate risk and the global movement to mobilize investors to reduce climate change risks from their portfolios. INCR’s mission is to mobilize investor leaders to address climate and other key sustainability risks, while building low-carbon investment opportunities. Over the past 10 years, this handful of investors has grown to more than 100 members managing over $11 trillion in total assets.

C. M. Rubin: The Global Search for Education: If Music Be the Food.... Leon Botstein will conduct the landmark production of Richard Strauss's opera Die Liebe der Danae opening Bard Music Festival July 29 (photo courtesy of Bard College) If music be the food of educational excellence, play on Maestro Botstein. Give me excess of Richard Strauss's Die Liebe der Danae at Bard Summerscape 2011. CDP (Carbon Disclosure Project) Non Financial Reporting Reinforced in EU The European Parliament voted in favour of a new law governing corporate reporting of non-financial information. As a result large listed companies in the EU will be asked to disclose their environmental and social impacts as part of their mainstream reporting to investors. Climate change means business change Climate change will affect European businesses in critical ways, making adaptation efforts instrumental for their prosperity. According to the CDP snapshot report major companies across Europe already experience climate impacts and are taking the issue seriously. Water scarcity threatens profitability of European companies A report published by CDP 'Safeguarding Europe’s Water Resources' finds that for an increasing number of European companies, water already has and will continue to have a profound effect on both their short term and long term profitability.

Tim DeChristopher Tim DeChristopher is an American climate activist and co-founder of the environmental group Peaceful Uprising. On December 19, 2008 he protested a Bureau of Land Management oil and gas lease auction of 116 parcels of public land in Utah's redrock country by successfully bidding on 14 parcels of land (totaling 22,500 acres) for $1.8 million with no intention to pay for them.[2] DeChristopher was removed from the auction by federal agents, taken into custody, and questioned. DeChristopher served 21 months in prison, from July 2011[3] through April 2013.[4] Saying they had been rushed into auction with insufficient environmental and scientific review, the United States Department of the Interior canceled many of the leases shortly after the auction and a subsequent court injunction.[5] Early life[edit] Activism[edit]

Stockholm Convention (POPs) Schedule and registration Objectives Increasing Parties’ knowledge on existing guidance to update NIPs, Parties’ understanding of HBCD and other POP-PBDEs listed, and Parties’ capacity to make inventories of POP-PBDEs, as part of the NIP update. Wanted: Radical Collaborations to Re-enchant Education How wonderful it is that nobody need wait a single moment before starting to improve the world. This insight from Anne Frank is evidenced today all across the world in education and many other domains. People are doing amazing things. Start ups, reforms, revolutions. TURI (Toxics Use Reduction Institute) Making Massachusetts a Safer Place to Live and Work Greg Morose, Rachel Massey and Liz Harriman The Toxics Use Reduction Institute (TURI) at the University of Massachusetts Lowell provides resources and tools to help make the Commonwealth a safer and more sustainable place to live and work.Established by the Massachusetts Toxics Use Reduction Act (TURA) of 1989, TURI collaborates with businesses, community organizations and government agencies to reduce the use of toxic chemicals, protect public health and the environment, and increase competitiveness of Massachusetts businesses.

Shark “Massacres” Happen Every Day…We Just Don’t Hear About It Earlier this week, MSNBC reported a shark “massacre” in which hundreds of sharks were found dead aboard a fishing vessel captured while fishing illegally in the Galápagos Marine Reserve. Scott Henderson, director of CI’s Eastern Tropical Pacific Seascape program and shark expert, responds. Photo: © Fred Bavendam/ Minden Pictures In the 30 years since I first arrived on the Galápagos Islands as a wide-eyed biology student, I have seen plenty to keep my eyes popping.

The International Labour Organization (ILO) was founded in 1919, its Constitution forming part of the Treaty of Versailles. The ILO became the first specialised agency of the UN in 1946. by jerry_jenkins Dec 13