HLC105. Top Adviser to Richard Nixon Admitted that 'War on Drugs' was Policy Tool to Go After Anti-War Protesters and 'Black People' A decades old quote from President Nixon's administration is making front page news and being shared widely around the web. 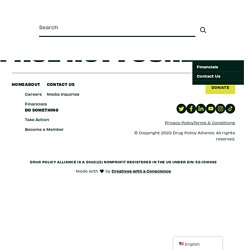 The quote from John Ehrlichman, who served as President Richard Nixon’s domestic policy chief gained new notoriety after appearing in a cover story in Harper’s Magazine by author Dan Baum. “You want to know what this was really all about,” Ehrlichman, who died in 1999, said, referring to Nixon’s declaration of war on drugs. “The Nixon campaign in 1968, and the Nixon White House after that, had two enemies: the antiwar left and black people.

You understand what I’m saying. We knew we couldn’t make it illegal to be either against the war or black, but by getting the public to associate the hippies with marijuana and blacks with heroin, and then criminalizing both heavily, we could disrupt those communities. Social media and employment law—are courts catching up? By Lorene D. 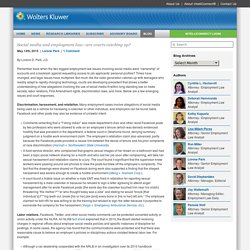 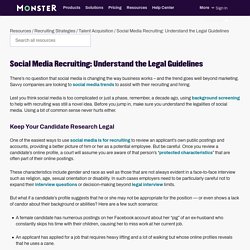 There’s no question that social media is changing the way business works -- and the trend goes well beyond marketing. Savvy companies are looking to social media trends to assist with their recruiting and hiring. Lest you think social media is too complicated or just a phase, remember, a decade ago, using background screening to help with recruiting was still a novel idea. WYSK: Workplace Religious Accommodation. 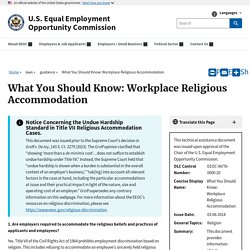 Are employers required to accommodate the religious beliefs and practices of applicants and employees? Yes. Title VII of the Civil Rights Act of 1964 prohibits employment discrimination based on religion. This includes refusing to accommodate an employee's sincerely held religious beliefs or practices unless the accommodation would impose an undue hardship (more than a minimal burden on operation of the business). Social Media Is Part of Today’s Workplace but its Use May Raise Employment Discrimination Concerns. Experts Tell EEOC That Use of Social Media by Employers, Applicants and Employees May Implicate the Laws EEOC Enforces WASHINGTON-The use of social media has become pervasive in today's workplace and, as a result, is having an impact on the enforcement of federal laws, a panel of experts told the U.S. 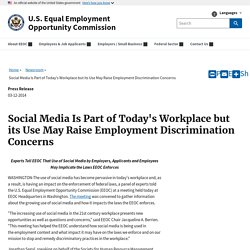 Equal Employment Opportunity Commission (EEOC) at a meeting held today at EEOC Headquarters in Washington. The meeting was convened to gather information about the growing use of social media and how it impacts the laws the EEOC enforces. "The increasing use of social media in the 21st century workplace presents new opportunities as well as questions and concerns," said EEOC Chair Jacqueline A.

Berrien. The use of sites such as LinkedIn and Facebook can provide a valuable tool for identifying good candidates by searching for specific qualifications, panelists told the Commission. Social Media Use in Hiring: Assessing the Risks. Social media is no longer cutting-edge; it is mainstream. 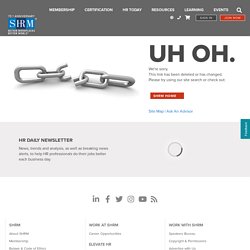 For HR to overlook it today would be like ignoring e-mail 20 years ago. One of the most important intersections between social media and employment is in the hiring process. It is here where there are great potential risks and rewards. Employers can use social media in two ways when hiring: to recruit candidates by publicizing job openings and to conduct background checks to confirm a candidate’s qualifications for a position. Social Media Recruiting: Understand the Legal Guidelines. Untitled. Fired Starbucks barista Margaret Hobson (left) has filed an age discrimination complaint with the Maryland Commission on Civil Rights. 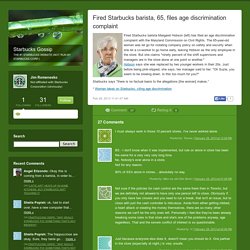 The 65-year-old woman was let go for violating company policy on safety and security when she let a co-worker to go home early, leaving Hobson as the only employee in the store. Too old or not qualified? Judge decides. Affirmative-action-court-decisions. June 2016 Current Case Fisher v. 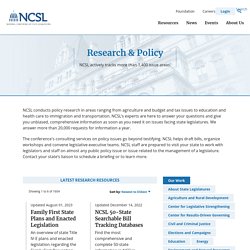 Texas In 2008, several high school seniors who had been denied admission at the University of Texas-Austin filed a lawsuit. The students argued that the University of Texas could not use race as a factor in admission processes if there were other race-neutral options that would have the same results on diversity. In a 7-1 Fischer I ruling released June 2013, the Court did not overturn affirmative action generally, but did emphasize that affirmative action programs need to be more strictly reviewed. 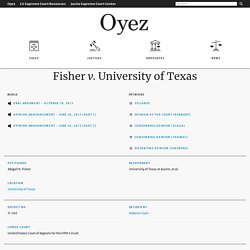 Readers are requested to notify the Reporter of Decisions, Supreme Court of the United States, Washington, D. C. 20543, of any typographical or other formal errors, in order that corrections may be made before the preliminary print goes to press. No. 11–345 ABIGAIL NOEL FISHER, PETITIONER v. UNIVERSITY OF TEXAS AT AUSTIN et al. on writ of certiorari to the united states court of appeals for the fifth circuit [June 24, 2013]