20 Diversion Tactics Highly Manipulative Narcissists, Sociopaths And Psychopaths Use To Silence You 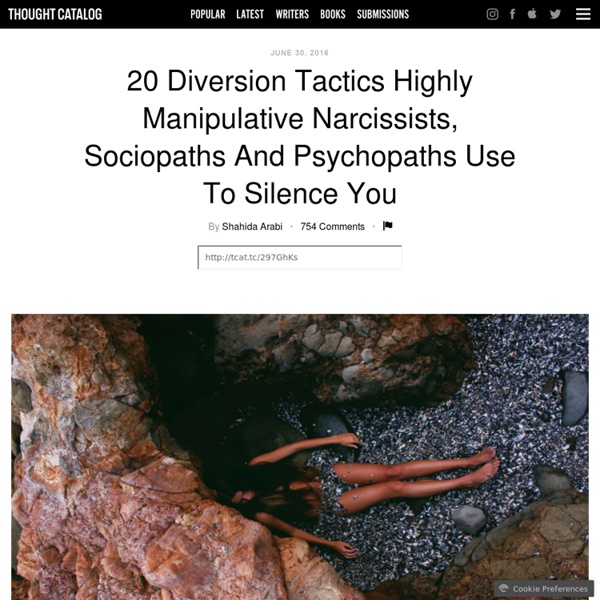 Toxic people such as malignant narcissists, psychopaths and those with antisocial traits engage in maladaptive behaviors in relationships that ultimately exploit, demean and hurt their intimate partners, family members and friends. They use a plethora of diversionary tactics that distort the reality of their victims and deflect responsibility. Although those who are not narcissistic can employ these tactics as well, abusive narcissists use these to an excessive extent in an effort to escape accountability for their actions. Here are the 20 diversionary tactics toxic people use to silence and degrade you. 1. Gaslighting. Gaslighting is a manipulative tactic that can be described in different variations of three words: “That didn’t happen,” “You imagined it,” and “Are you crazy?” When a narcissist, sociopath or psychopath gaslights you, you may be prone to gaslighting yourself as a way to reconcile the cognitive dissonance that might arise. 2. Solution? 3. 4. 5. 6. 7. 8. 9. 10. 11. 12. 13.

Characteristics of Narcissistic Mothers 1. Everything she does is deniable. There is always a facile excuse or an explanation. Chef Dan Esses Hopes To Rescue Money Pit Jack & Jake's With New Dryades Public Market The long-delayed O.C. Haley money pit Jack & Jake's has been through some major shakeups in the past few months leading to its inevitable demise—well, to a big rebranding move anyways. You may recall that 'visionary' CEO John Burns stepped down in September after the $17.7 million dollar two-story market (which also got a $1 million loan from the city) had stalled out indefinitely. Ian McNulty now reports that Three Muses chef and pasta guru Dan Esses is managing the project, which is now called Dryades Public Market and is already open.

Seekers Of The Lost Pieces – The Lacanian Review When I first saw the Kennedy assassination filmed by Zapruder, I thought that Jacqueline was trying to jump out of the limousine after the fatal shot. An understandable reaction of panic in someone who sees bullets impact on the one next to them. Later, White’s interview made me see better what the images showed. 20 Brutally Honest Reasons Why I Don’t Have Any Friends 1. I have lost touch with most people from high school and college because it’s hard to make time for a social life when I spend most of my hours working. 2. I never make any new friends because I never leave the house. 3.

11 Excel Shortcuts That Make Budgeting Easy Excel is a powerhouse in the business world, but the software also offers tremendous benefits for individuals in need of budgeting help. From playing with your stock options to planning for taxes, there are dozens of ways in which people can use Excel to their advantage, provided they understand the program’s tools and tricks. Below are 11 Excel shortcuts that make budgeting easy while saving you valuable time each month. Related: How Creating a Budget Can Improve Your Credit Score

Character Strengths and Virtues: A Classification Character Strengths and Virtues is a groundbreaking handbook that was created built on reports from a prestigious group of researchers who have attempted to create a systematic classification and measurements of widely valued positive traits. The aim was to present a measure of humanist ideals of virtue in an empirical and scientific way. This handbook intends to provide a theoretical framework that will help assist positive psychology practitioners in developing practical applications for the field. There are six classes of virtues that are made up of 24 character strengths: Rejection Sensitive Dysphoria: How to Treat it Alongside ADHD Rejection sensitive dysphoria (RSD) is an extreme emotional sensitivity and emotional pain triggered by the perception — not necessarily the reality — that a person has been rejected, teased, or criticized by important people in their life. RSD may also be triggered by a sense of failure, or falling short — failing to meet either their own high standards or others’ expectations. Dysphoria is Greek for “difficult to bear.”

The Toxic Attraction Between an Empath & a Narcissist. get elephant's newsletter We know that “narcissist” has become a bit of a buzzword recently, and some folks are quick to apply it to an ex-lover or family member or friend. While awareness of this concept is healthy, so is remembering that it is, in a mental health context, a serious condition that shouldn’t be applied to someone you’re mad at because they stole your mirror. ~ Eds. I am an empath. I discovered I was an empath after I got involved in a very deep and highly destructive relationship with a narcissist. I am writing this article from the perspective of an empath, however, would love to read the view from the opposite side if there are any narcissists that would like to offer their perception on this.

Secrets of the teenage brain Several years ago Frances E Jensen’s 16-year-old son wrote off a car. A few years earlier, her other son had returned from a friend’s house with his hair dyed jet black. The University of Pennsylvania neurologist was finding her teenagers’ erratic behaviour increasingly taxing, so she decided to study teenage thought processes and gathered her research in the book The Teenage Brain. She found that while much had been written about teen psychology and parenting, no one had explained the neurons and cerebral connections that make those years such a unique – and terrifying – part of growing up. The teenage brain has only recently become a subject for serious research, which shows how little was known about it. But does knowing what is going on in a teenager’s brain make them any easier to live with?

Masculinity Re-Imagined: Ten Powerful Actions to Transcend Conquest Culture and Embrace Compassion - —Masculinity has a serious problem. It has been boxed into a culture of conquest; its roots have a depth deeper than we can measure and an age longer than we can count. I am a man, and I sense this is true—yet I do not accept that it is the right path for men to walk. Conquest culture in all its forms—conquest over women, over the earth, over other men, over people of other nations or another skin color, overall living beings—brings about a shallow superiority that severs a man from his own spirit. Below are 10 powerful actions men can take to find their own path home through re-imagining masculinity for healthy relationships, families, communities, and society and the basic power each offers to transform male culture: 1.

Fascia: The Secret Organ And How To Make Your Legs Longer and Leaner A visit to structural integrative specialist Lauren Roxburgh begins with a photo session in front of a gridded wall at her Santa Monica studio. She instructs you to stand in your natural posture—in a sports bra and tights—feet aligned against two marks on the floor. 90 or so minutes later, she sets you up in front of the same grid, and then shows you the infomercial-esque results. If she didn’t have you hop off the bed mid-session to hobble around for a few minutes—feeling how strange it is when one of your legs is longer than the other—you wouldn’t believe what you’re seeing. Which is that Lauren has in fact made you taller—and as a result of the heightened alignment, leaner. Your head hits the grid inches higher.

Maslow Self Actualization - unlearn. "Self Actualization is the intrinsic growth of what is already in the organism, or more accurately, of what the organism is." Abraham Maslow Maslow studied healthy people, most psychologists study sick people. The characteristics listed here are the results of 20 years of study of people who had the "full use and exploitation of talents, capacities, potentialities, etc.." Self-actualization implies the attainment of the basic needs of physiological, safety/security, love/belongingness, and self-esteem.