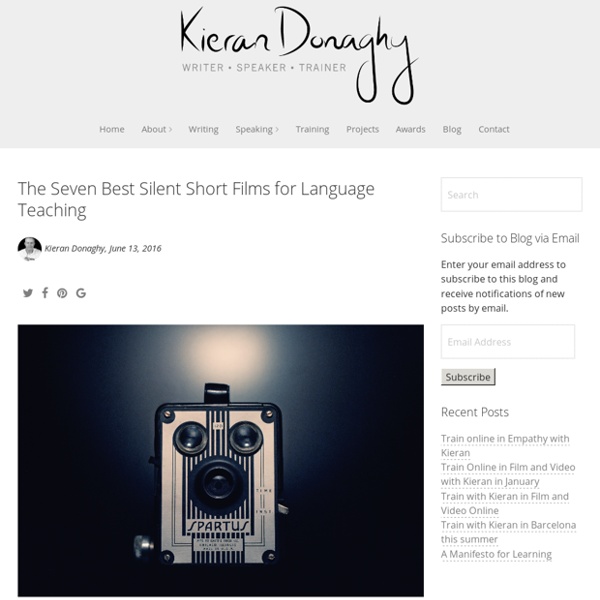 As many short films are artistic, they have limited appeal in the commercial marketplace and are funded from diverse sources. To make them easier to sell worldwide, they often contain little or no dialogue, which makes comprehension much easier. As a result, they offer intensely ‘filmic’ experiences, using images and movement, sequence and duration, sound and music to tell their stories. These silent films are perfect for the language classroom as they can be used with any level – the teacher just needs to adapt the difficulty of the task to match the level of the students. Here are the seven short films which I have found work best in the language classroom. Your Secret Your Secret is a wonderful short film by Jean-Sebastian Monzani. You can watch the film below and find a full lesson plan here. Your secret from Jean-Sebastien Monzani on Vimeo. Taking Pictures Taking Pictures is a simple but beautiful short animated film by Simon Taylor. Moments MOMENTOS from Nuno Rocha on Vimeo. Amar Five

Look Up This EFL lesson is designed around a short film and poem by Gary Turk and the theme of isolation caused by the use of new technology. Students watch a short film with no sound and speculate about the story it tells, read a poem and discuss digital technology, social media and isolation. I would ask all teachers who use Film English to consider buying my book Film in Action as the royalties which I receive from sales help to keep the website completely free. Language level: Upper Intermediate (B2) – Advanced (C1) Learner type:Teens and adults The Seven Best Short Animated Films for the Language Classroom - Kieran Donaghy Animated films are ones in which individual drawings, paintings, or illustrations are photographed frame by frame. Traditionally animated films have been associated with children, however, nowadays they are designed to appeal to everyone. With the increased ease of creating animations, there has been a huge rise in the number of animated films being produced, and the vast majority of these are short animations. Many of these short animated films can be exploited in the language classroom as they are short enough to be used in a single session, offer a complete narrative in a short space of time, have a unique capacity of grabbing and holding students’ attention, and deal with contemporary subjects and issues, such as bullying, racism, sexism, homelessness, and human rights, which are relevant to students’ lives.

The Seven Best Short Films for ELT Students - Kieran Donaghy I’ve been writing lesson plans designed around short films for my website Film English for six years. Teachers often ask me how I find the short films I use in my lesson plans. The answer is quite simple: I’ve watched literally thousands of short films and developed an instinct for the type of engaging and simple short films which will work in the ELT classroom. In this article I’d like to share what for me are the seven best short films for the language classroom. The Mirror The Other Pair This ELT lesson plan is designed around a short film by Sarah Zorik titled The Other Pair and the themes of altruism and empathy. Students watch a short film, write a story, and speak about a story. I would ask all teachers who use Film English to consider buying my book Film in Action as the royalties which I receive from sales help to keep the website completely free. Language level: Pre-intermediate (A2) –Intermediate (B1) Learner type: All ages

Mastering pragmatics with Macmillan Dictionary Learning a language is about understanding what words mean, grammar, spelling and pronunciation. But there is more to it than that. As part of the Macmillan Education Life Skills series, Macmillan Dictionary focuses on an area of language learning students of English often find difficult to master: pragmatics. Lesson plan of the month This lesson plans was written by author Jonathan Marks to help learners with pragmatics. Overview: In this pragmatics lesson, learners develop their awareness and understanding of expressions meaning I don't know and practise using these expressions.

What’s on your mind? This EFL lesson is designed around a short film by Shaun Higton and the theme of Facebook. Students practise vocabulary related to social media, watch a short film, and talk about Facebook. Step 1 Give the students the social media vocabulary worksheet. Best Resources For Teaching About Rosa Parks & 60th Anniversary Of The Montgomery Bus Boycott Thanks to Teaching Tolerance, I just learned that December 4th will be the 60th anniversary of the Montgomery Bus Boycott. I’m sure there will be lot of new resources becoming available in the next few weeks, and I’m also sure that there are plenty that I’m not including in the first edition of this post. Please let me know what I’m missing. You might also be interested some of the many previous “Best” lists I’ve published on the Civil Rights Movement & race and racism, including: The Best Websites For Learning About Martin Luther King The Best Resources To Remember Dr.

Albert and Aidan Sykes This ELT lesson plan is designed around a short video by Story Corps in which a nine-year-old boy interviews his father, and the themes of family and racism. In the lesson students do a dictation, predict the answer to questions, listen to an interview, answer comprehension questions, watch two short videos, and speak about the videos. I would ask all teachers who use Film English to consider buying my book Film in Action as the royalties which I receive from sales help to keep the website completely free. Language level: Intermediate (B1) – Upper Intermediate (B2) Learner type: Teens and adults THE A-MAZE-ING GAME ‘If you don’t know where you are going, you might wind up someplace else.’ A ‘maze’ principle has been widely used in ELT material design, in particular for reading assignments, where students are given different options and a variety of different outcomes. There isn’t one correct answer, so different teams find themselves taking different paths while practising the language in a genuinely communicative activity. If you have never tried them with your students, check these reading mazes on the British Council website – Spending Maze or Holiday Maze. They’re sure to be a hit with your students.

The Best Posts On The “Flipped Classroom” Idea Check out my two-part Education Week Teacher series on the flipped classroom here I’m a bit wary/skeptical about whole “Flipped Classroom” idea and how it works in practice. Diana Laufenberg spoke for me, also, in some of her tweets about the concept: