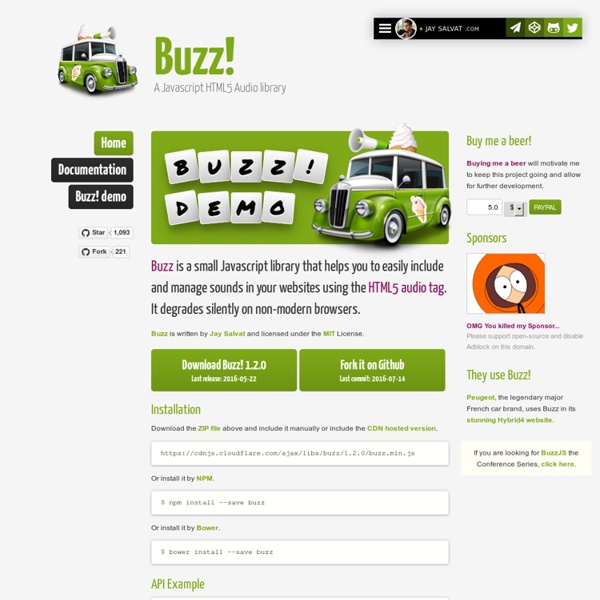 jquery-tubular - a jQuery plugin for full-size YouTube video backgrounds demo: seanmccambridge.com/tubular Usage is straightforward and requires JavaScript on the client's browser to work. Tubular is a jQuery plugin and therefore relies on jQuery. Getting Started with Web Audio API Before the HTML5 <audio> element, Flash or another plugin was required to break the silence of the web. While audio on the web no longer requires a plugin, the audio tag brings significant limitations for implementing sophisticated games and interactive applications. The Web Audio API is a high-level JavaScript API for processing and synthesizing audio in web applications. The goal of this API is to include capabilities found in modern game audio engines and some of the mixing, processing, and filtering tasks that are found in modern desktop audio production applications. What follows is a gentle introduction to using this powerful API.

Coding An HTML 5 Layout From Scratch HTML5 and CSS3 have just arrived (kinda), and with them a whole new battle for the ‘best markup’ trophy has begun. Truth to be told, all these technologies are mere tools waiting for a skilled developer to work on the right project. As developers we shouldn’t get into pointless discussions of which markup is the best. They all lead to nowhere. Rather, we must get a brand new ideology and modify our coding habits to keep the web accessible. While it is true HTML5 and CSS3 are both a work in progress and is going to stay that way for some time, there’s no reason not to start using it right now.

ie7-js - A JavaScript library to make MSIE behave like a standards-compliant browser. IE7.js is a JavaScript library to make Microsoft Internet Explorer behave like a standards-compliant browser. It fixes many HTML and CSS issues and makes transparent PNG work correctly under IE5 and IE6. Current version: 2.1 beta4. SoundTouch Sound Processing Library About the SoundTouch library The SoundTouch Library Copyright © Olli Parviainen 2001-2014 SoundTouch is an open-source audio processing library for changing the Tempo, Pitch and Playback Rates of audio streams or audio files Tempo (time stretch): Changes the sound to play at faster or slower tempo than originally without affecting the sound pitch. Pitch (key) : Changes the sound pitch or key while keeping the original tempo (speed). Playback Rate : Changes both tempo and pitch together as if a vinyl disc was played at different RPM rate.

Have a Field Day with HTML5 Forms Forms are usually seen as that obnoxious thing we have to markup and style. I respectfully disagree: forms (on a par with tables) are the most exciting thing we have to work with. Here we’re going to take a look at how to style a beautiful HTML5 form using some advanced CSS and latest CSS3 techniques. I promise you will want to style your own forms after you’ve read this article. Here’s what we’ll be creating:

Native Fullscreen JavaScript API (plus jQuery plugin) HTML5 <video> is great, but when it was first released, one of the big complaints was that it couldn’t do true FullScreen like Flash. Thankfully, this is changing and native FullScreen support is coming to most browsers in the next few months (no word from the Internet Explorer team Update on IE below #5)) The API is still heavily in flux especially since the W3C joined in this week. node.js and socket.io chat tutorial – ps: it's mike i found that the ready availability of documentation and the eagerness of experienced individuals to help the newly adopting, throughout the node.js communities, allow for quicker learning and sharing of acquired skills i’ve created a very simple single-room chat client using node.js, socket.io and the express module UPDATE: long overdue, but you can now skip the following step and just install via the .msi or .pkg files and they include NPM – to begin, you must install node.js and npm along with their dependencies cd /pick_a_folder git clone cd node git checkout v0.4.12 #or latest stable version ./configure make make install #finish nodejs install curl | sh #install npm

Coding a CSS3 & HTML5 One-Page Website Template Martin Angelov Web development is an area in which you have to keep up with the latest technologies and techniques, so that you are at the top of your game. And no wonder – this is an area which changes with an amazing pace. What is the standard now will be obsolete in just a couple of years. the cross-browser WebSocket for realtime apps. What is Socket.IO? Socket.IO aims to make realtime apps possible in every browser and mobile device, blurring the differences between the different transport mechanisms. It's care-free realtime 100% in JavaScript. Server