Build Cross-Platform Android and iOS UIs with Xamarin Forms. This article was peer reviewed by Adrian Sandu. Thanks to all of SitePoint’s peer reviewers for making SitePoint content the best it can be! Xamarin aims to provide a solution to allow companies and developers develop natively and cross-platform. Using Xamarin, developers can target Android, iOS and Windows (Mobile) 10, using a single industry standard language, C#. Certain aspects of the code base are platform specific, for example the UI layer, forcing programmers to develop them repeatedly for each platform.

With Microsoft’s recent acquisition of Xamarin, it is likely to become a better supported, integrated and essential part of a cross-platform strategy for Microsoft and developers. In 2014, Xamarin introduced Xamarin Forms (XF). Xamarin Vs. Titanium Vs. PhoneGap Vs. Cordova: A Comparison. The statistics in favor of app development for eCommerce leave little doubt that apps have become the most rapidly growing mobile technology that consumers have embraced at all levels. 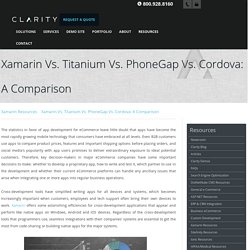 Even B2B customers use apps to compare product prices, features and important shipping options before placing orders, and social media's popularity with app users promises to deliver extraordinary exposure to ideal potential customers. Therefore, key decision-makers in major eCommerce companies have some important decisions to make: whether to develop a proprietary app, how to write and test it, which partner to use in the development and whether their current eCommerce platforms can handle any ancillary issues that arise when integrating one or more apps into regular business operations. Cross-Platform Development Lowdown: Xamarin vs. PhoneGap.

Should you allocate all of your resources to developing a native iOS app, which has historically shown to be the platform of choice for more affluent Western users? 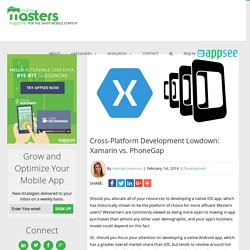 Westerners are commonly viewed as being more open to making in-app purchases than almost any other user demographic, and your app’s business model could depend on this fact. Or, should you focus your attention on developing a native Android app, which has a greater overall market share than iOS, but tends to revolve around hot emerging markets? Android smartphones are quickly replacing feature phones throughout much of the world today, so advertising to rising middle class users is an opportunity that most mobile entrepreneurs shouldn’t overlook… 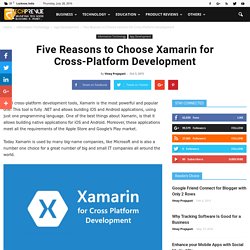 This tool is fully .NET and allows building iOS and Android applications, using just one programming language. One of the best things about Xamarin, is that it allows building native applications for iOS and Android. Moreover, these applications meet all the requirements of the Apple Store and Google’s Play market. Defining a New Breed of Cross-Platform Mobile Apps -Telerik Developer Network. Sometimes it feels like we’ve been arguing over which is better, a native app or a hybrid app, since the beginning of time, with dire consequences predicted for anyone who chose incorrectly. 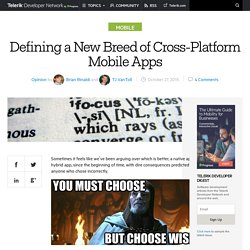 The debate became overheated when, in 2012, Mark Zuckerberg famously dissed HTML5 at the Disrupt conference: When I’m introspective about the last few years, I think the biggest mistake that we made as a company is betting too much on HTML5 as opposed to native. – Mark Zuckerberg But a lot has changed since 2012. First of all, HTML5 support is now so ubiquitous that even the term itself has begun to sound like an anachronism. Nobody really touts their HTML5 support anymore — it’s simply assumed. In terms of mobile app development, the landscape has changed dramatically too. The native development landscape changed significantly with introduction of Swift. 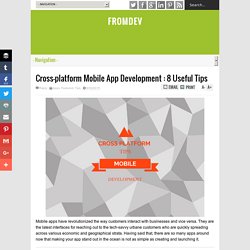 They are the latest interfaces for reaching out to the tech-savvy urbane customers who are quickly spreading across various economic and geographical strata. Having said that, there are so many apps around now that making your app stand out in the ocean is not as simple as creating and launching it. One of the most fundamental aspects of the app world to understand is the choice of available operating platforms on which the apps are supposed to run, their similarities and differences.

Without sufficient due diligence while building your cross-platform apps, you can be rest assured of your failure. Here we present some simple tips to ensure that your cross-platform app development produces an app that is highly compatible with all the leading mobile OS such as iOS from Apple, Android from Google and Windows from Microsoft. 1. 2. Battle of Supremacy Between 2 Cross-Platform Framework. Posted in - Mobile App Date - 11 May. 2016 The smartphone industry is really fragmented into different devices and OS ecosystems. iOS on iPhone was the first modern smartphone platform after Palm and Blackberry. 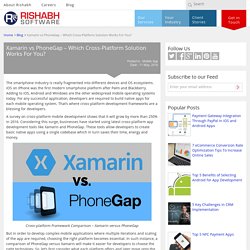