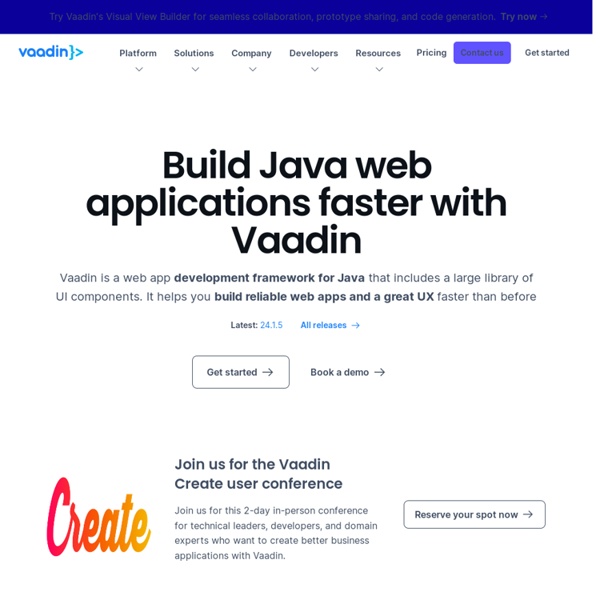 Rich user interface components By building your application from the hundreds of polished components that are available, you can focus on designing the best user experience. Built on HTML5 Lightning fast rendering and modern web technologies let you move even the most demanding applications to the web platform with ease. No need for installations or plug-ins. Looks matter Your application is percieved to be as good as its user interface. Use one of the amazing themes bundled with Vaadin or create a tailored look and feel for your application.

Spring Web Flow The sweet spot for Spring Web Flow are stateful web applications with controlled navigation such as checking in for a flight, applying for a loan, shopping cart checkout, or even adding a confirmation step to a form. What these scenarios have in common is one or more of the following traits: There is a clear start and an end point.The user must go through a set of screens in a specific order.The changes are not finalized until the last step.Once complete it shouldn't be possible to repeat a transaction accidentally Team Blog A bit over a year ago we released Vaadin 7 renewing the framework inside out. Then came push support with 7.1. Now what? Let’s take a look into the future. First off, we do not see C# coming up (who is this Nutella guy anyway?). With Java 8 and lambdas already well supported, we have a solid foundation that welds Java and HTML5 platforms together in the most elegant way in the industry.

Smart GWT Smart GWT is a GWT-based framework that allows you to not only utilize its comprehensive widget library for your application UI, but also tie these widgets in with your server-side for data management. For a quick conceptual overview of Smart GWT, read this article. Smart GWT is based on the powerful and mature SmartClient library. In addition to Smart GWT LGPL, Pro & Enterprise editions of Smart GWT are available with additional features & tools, as well as commercial support. war plugin The WAR Plugin is responsible for collecting all artifact dependencies, classes and resources of the web application and packaging them into a web application archive. Usage General instructions on how to use the WAR Plugin can be found on the usage page. Some more specific use cases are described in the examples given below.

Pragmatic Web Services With Apache CXF Apache CXF [1] is an open-source Java-based framework whose goal is to help users develop standard-based, interoperable and robust web services. The ultimate goal of writing web services is to ensure that a given web service implementation can be consumed by a variety of design- and run-time clients in an interoperable and effective manner. A lot has been written recently about how web services have to be designed. It appears that arguments are mostly over now with REST and SOAP communities proceeding with implementing web services they way they see fit most.

Jackson General Jackson Tutorial: the best place to start; covers basic processing approaches and covers common usage patterns. Jackson FAQ covers many common questions regarding typical usage. Prevent cross-site scripting when using JSON objects using ESAPI and Jackson framework 1.7.x « Stefan Hendriks' Blog Recently I have had the oppertunity to fix a cross-site-scripting problem. The problem is: a lot of JSON objects are being sent over the wire and the data is not being html escaped. This means that anyone who would put html data IN would get it out and make any user vulnerable for XSS attacks. Using Jackson with Apache CXF Whilst working on my Javascript, ExtJS 4 and Apache CXF skills I came across a solution to a problem I encountered getting ExtJS to talk to Apache CXF using JSON. The basis for this issue revolves around “wrapping” in JSON and two different schools on what is correct way to encode it. As far as I can see there is the more verbose version which Jettison, the default JSON serialiser in Apache CXF produces, then there is the “unwrapped” version which the alternate serialiser Jackson produces.