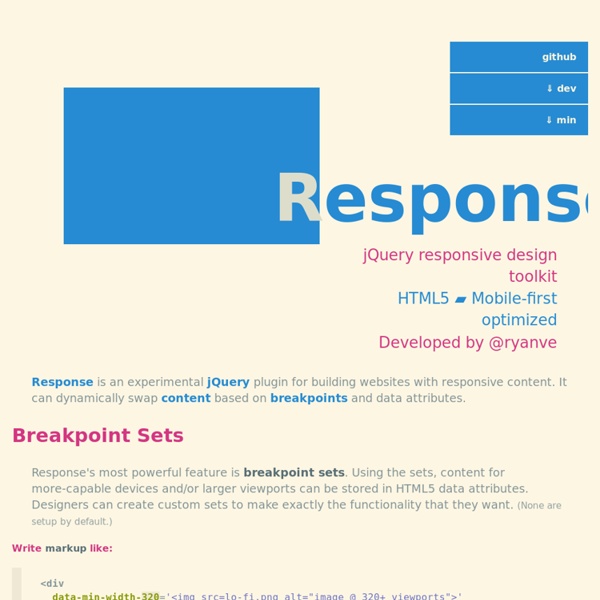 Response's most powerful feature is breakpoint sets. Using the sets, content for more-capable devices and/or larger viewports can be stored in HTML5 data attributes. Designers can create custom sets to make exactly the functionality that they want. (None are setup by default.) Breakpoints can be based on width | device-width | height | device-height | device-pixel-ratio or on custom props. Designers can use the default breakpoints (ideal for 960 grids) or specify custom breakpoints.

The Heads-Up Grid Responsive web design, as described/defined by Ethan Marcotte anyway, is the act of creating various forms of the same basic site design that are optimized for different ranges of browser window widths. Luckily, the way that I originally constructed the Heads-Up Grid made it relatively easy to adapt to the needs of responsive web design. You can quickly and easily define as many different grids as you need by way of basic JavaScript conditional statements. Even if you are not extremely comfortable with JavaScript, if you are ambitious enough to tackle responsive web design you will most likely have no problem figuring this out. To create a responsive grid use the following code as a template. This template is fairly self-explanatory if you are familiar with CSS Media Queries.

An iOS scrolling emulator for jQuery Click + Drag to see the effect 1. CSScience Select catcher Created by Ian Hansson (@teapoted) Art from Brendan Zabarauskas (@bjzaba_). Icons from the iconSweets set. Browser Support: Best In Test: Firefox (transition performance) Full Support: Chrome, Firefox, Opera, Safari (latest versions of all browsers) Partial Support: IE9 (Functional, but does not support transitions) Web And Design Trends 2013 The Internet, as an important part of emerging technology, keeps changing and evolving, depending on the major direction that people are pursuing. Therefore, we have decided to create this complete trend guide to show what’s going on, what’s on the table and what is definitely setting the direction to follow in everything related to graphic and web design and development, which by the way, are getting way closer to each other each passing day. As the fields of Web design and web development increasingly intertwine, the need to use concepts that can be understood by both designers and developers becomes crucial. That’s why we want to help foster the growth of a new generation of web ninjas with this article-gift prior to our launching. Take this as a reminder of our commitment to fresh, quality and stunning content.

25+ Must-have Chrome extensions for web designers and developers For many web designers and developers, Firefox is unsurpassable. For others, Firefox eats Chrome’s dust. For the past two years, since Google Chrome’s release, there’s been a raging debate on which browser is superior. Mozilla’s open source product has stood the test of time and Firefox has quickly become the most used browser, having surpassed Microsoft’s Internet Explorer. Don’t feel sorry for Google Chrome, however.

Blueberry - A simple, fluid, responsive jQuery image slider. What is Blueberry? Blueberry is an experimental opensource jQuery image slider plugin which has been written specifically to work with fluid/responsive web layouts. A brief history With the popularity of smart phones and tablet devices responsive/fluid web layouts have become an important part of modern web design. Working on a new project I decided to use the 1140px grid from cssgrid.net. jquery-iphone-ui - jQuery iPhone UI This is JavaScript library for prototype iPhone interface on web pages Download Download in archive | Source code (SVN) Beamer [If you plan to use the development code, please read the entire text below carefully.] Official mailing list (Google Groups): beamer-class@googlegroups.com / News Code in repository is always in release candidate stage for next version. It's usable (because authors use it :-) ), but not all features have been extensively tested.

10 Developer Tips To Build A Responsive Website [Infographic] – ReadWrite - Aurora Many website owners say to themselves, “I want my site to look great on mobile, but I don’t know where to start.” If you are in the business of building and designing websites, you cannot ignore the fact that many people are going to be visiting your sites on their smartphones and tablets. The Web and the mobile browsers remain one of the top ways that users interact with websites and if they have trouble on their smartphone, there is a good chance they are not coming back. That’s where responsive design can help.

Background-size Home / CSS3 Previews / Background-size Another new property introduced by the CSS3 Backgrounds and Borders module is background-size. The property adds new functionality to CSS allowing designers to specify the size of background images using either lengths, percentages, or by using one of two keywords; contain or cover. Browser support has grown of late, with the current versions of most popular browsers now supporting background-size, including Firefox, Safari, Chrome, Internet Explorer and Opera, without the need for vendor prefixes.