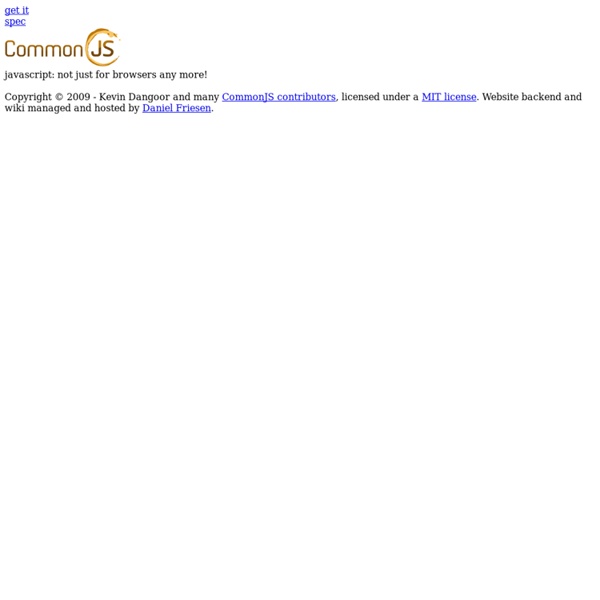 JavaScript is a powerful object oriented language with some of the fastest dynamic language interpreters around. The official JavaScript specification defines APIs for some objects that are useful for building browser-based applications. However, the spec does not define a standard library that is useful for building a broader range of applications. The CommonJS API will fill that gap by defining APIs that handle many common application needs, ultimately providing a standard library as rich as those of Python, Ruby and Java. The intention is that an application developer will be able to write an application using the CommonJS APIs and then run that application across different JavaScript interpreters and host environments. With CommonJS-compliant systems, you can use JavaScript to write:

Top 20 Ajax Tutorials Ajax is commonly overlooked as a language that many newbies to web design don’t really understand. Well the truth is, Ajax can do wonderful things and give your website that extra special something. I have rounded up a collection of the top 20 Ajax tutorials I think will help anyone get their feet wet with Ajax. Let me know what tutorial you like best, and if you know of any other tutorials that have helped you master Ajax, then please by all means drop us a comment.

base2 - Project Hosting on Google Code Because this library is standards-based it means that you don’t have to learn a new API. It uses standard (DOM, ECMAScript) properties and methods throughout which also means that there is no need for a lot of accompanying documentation. base2 is a lightweight library that irons out all the annoying differences in JavaScript implementations. It provides the additional functionality from JavaScript 1.6+ that only Mozilla browsers implement. It also adds some features from ES4. The library is only 6KB (gzipped). perf impact of passing references Info This test is attempting to show the performance impact of passing references compared to normal scope chain lookups. Check out Compact.js, that's based on Require.js Dominik Guzei Wizzart by the way -> I'm searching for a JavaScript internship :) Modified By

The State Of JavaScript: Introduction The State Of JavaScript Depending on who you ask, right now JavaScript is either turning into a modern, reliable language, or a bloated, overly complex dependency hell. Or maybe both? What's more, there's just so many options: Do you use React or Angular 2? Do you really need Webpack? And what's this month's recommended way of dealing with CSS? css3-mediaqueries-js - Project Hosting on Google Code css3-mediaqueries.js by Wouter van der Graaf is a JavaScript library to make IE 5+, Firefox 1+ and Safari 2 transparently parse, test and apply CSS3 Media Queries. Firefox 3.5+, Opera 7+, Safari 3+ and Chrome already offer native support. UPDATE: Google discontinued the downloads section.

RequireJS Introduction§ 1 While RequireJS loads jQuery just like any other dependency, jQuery's wide use and extensive plugin ecosystem mean you'll likely have other scripts in your project that also depend on jQuery. You might approach your jQuery RequireJS configuration differently depending on whether you are starting a new project or whether you are adapting existing code. Global Functions§ 2 jQuery registers itself as the global variables "$" and "jQuery", even when it detects AMD/RequireJS. The AMD approach advises against the use of global functions, but the decision to turn off these jQuery globals hinges on whether you have non-AMD code that depends on them. jQuery has a noConflict function that supports releasing control of the global variables and this can be automated in your require.config, as we will see later.

The following are the possible ways to create professional animations in SVG: – Medium Export your SMIL animations from a graphics application. The standard way to produce SVG animations with SMIL is to create them in applications like Adobe Animate CC and similar others (see the section below for a list), and then using plugins like Flash2svg to export them in SVG. The Flash2svg add-on, created by the very talented Tom Byrne, is a marvel. With it you can export from Adobe Animate CC almost all animations+sound as a single self-contained SVG file. Even entire cartoon episodes like this one: If you need to use the SVG animation for cartoon editing or video production, you can then import the resulting SVG file in your editing software, for example Adobe After Effects.

A JavaScript Module Pattern Eric Miraglia (@miraglia) is an engineering manager for the YUI project at Yahoo. Eric has been at Yahoo since 2003, working on projects ranging from Yahoo Sports to YUI. For the past several years, Eric and his colleagues on the YUI team have worked to establish YUI as the foundation for Yahoo’s frontend engineering work while open-sourcing the project and sharing it with the world under a liberal BSD license. Eric is an editor and frequent contributor to YUIBlog; his personal blog is at ericmiraglia.com. Prior to working at Yahoo, Eric taught writing at Stanford and elsewhere and led frontend engineering teams at several startups. Global variables are evil.

For Your Script Loading Needs As JavaScript usage has skyrocketed over the last few years, so has the sheer number of scripts that are being loaded in an average web page. With these script tags comes a lot of baggage, such as blocking and lack of dependency management. Today, I'd like to bring your attention to a number of JavaScript loaders, which are mini toolkits that significantly simplify how you add and load scripts. The Problem with Simple Script Tags They Block the Page