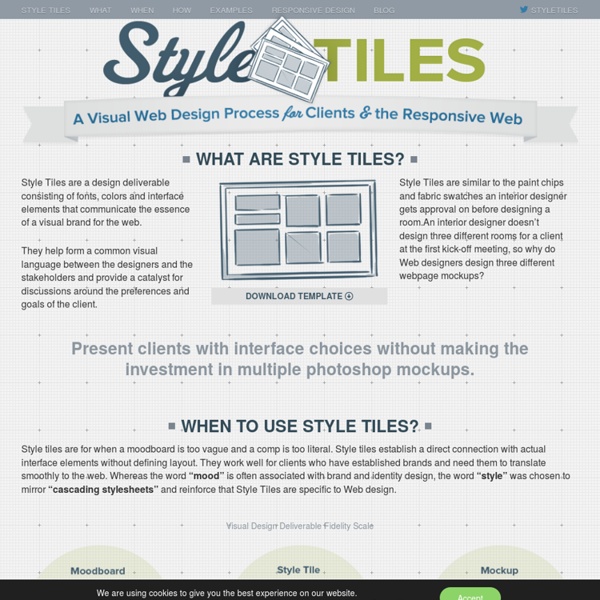 Have a design kickoff meeting Designers should be in every meeting. Be prepared. Have the stakeholders complete a survey before the meeting or have everyone answer questions together. Ask questions Whether you give them to stakeholders before a meeting or during it, create a survey of questions tailored for them.

What's The Greatest Logo Of All Time? A logo is meant to be a brand's most enduring symbol, a graphic totem that distills a company's essence down into a single graphical mark that is beautiful, flexible, and memorable. Crafting such a deceptively simple symbol is a massive undertaking, so it's no surprise that the majority of the world's logos are so disposable. But when a logo achieves those lofty goals?

Multi-Device Layout Patterns Through fluid grids and media query adjustments, responsive design enables Web page layouts to adapt to a variety of screen sizes. As more designers embrace this technique, we're not only seeing a lot of innovation but the emergence of clear patterns as well. I cataloged what seem to be the most popular of these patterns for adaptable multi-device layouts. To get a sense of emerging responsive design layout patterns, I combed through all the examples curated on the Media Queries gallery site several times. I looked for what high-level patterns showed up most frequently and tried to avoid defining separate patterns where there were only small differences.

Free Product Mockups & Templates What does Placeit do? Placeit creates instant product mockups. Let’s say you want to create an iPhone mockup for your new app or an iPad mockup in a work setting. You just provide us with the screenshot or URL of the site and we’ll generate as many device mockups as you’d like. What kind of stages do you have? Responsive Web Layouts for Mobile Screens: Intro, Tips and Examples Designers have it tougher now than before. We not only have to design for stationary devices, but also mobile devices like the tablet and smartphones, and since we are talking about a lot of different screen sizes and resolutions here, it’s a huge task to shoulder. In light of this, responsive web design could be the best solution. It offers more than just a simple mobile template; instead, your entire site layout is designed to be flexible enough to fit into any possible screen resolution.

Smashing Magazine - (Private Browsing) Advertisement Like any overzealous teenager aspiring to be a Web designer back in 1999, I found myself in an “Electronic Design” class, behind the wheel of one of those old-school aqua iMacs1. If you found yourself in a similar situation, chances are you were given Adobe Photoshop as your vehicle for designing the Web. For me, it was version 6.0. No matter which version you had, undoubtedly you know someone who can “trump” you by having adopted an earlier version. We designers take much pride in this, in case you hadn’t noticed. Making It Pictures “Making It” is a documentary film that explores the daily struggles of making a living, staying creative, and making it all up as we go along. The film focuses primarily on Eric Fortune, Andrew Bawidamann, and Brian Ewing discussing education, their business model, and the future of Illustration but ultimately asking, what does “Making It” mean to each artist? Andrew Bawidamann, Brian Ewing and Eric Fortune are three excellent artists who are in the middle of their careers. This stage of their journey is the toughest because they’re on the edge of success, “Making IT”.

Free Product Mockups & Templates What does Placeit do? Placeit creates instant product mockups. Let’s say you want to create an iPhone mockup for your new app or an iPad mockup in a work setting. You just provide us with the screenshot or URL of the site and we’ll generate as many device mockups as you’d like. What kind of stages do you have? We have everything from iPhones to iPad to Android to MacBooks to iMacs. Creating a Responsive WordPress Site Your Mobile Users Will Love As more and more people get online using a variety of mobile devices and screen sizes, it’s essential that your WordPress site is responsive and device-agnostic. Heck, you may even be reading this article on your phone right now. (How does our site look? Okay? Good.)

Clear Thinking - The Clearleft Blog - (Private Browsing) Since Mikey joined us in February, the number of designers working at Clearleft is at an all time high. As the company grows, we want to maintain the same level of knowledge sharing and collaboration that happened more spontaneously with a smaller team. With that in mind, we’ve been experimenting with weekly design reviews (almost) every Friday. Scheduled just before lunch, rumbling stomachs ensure these don’t drag on.