Spend your time innovating, not replicating 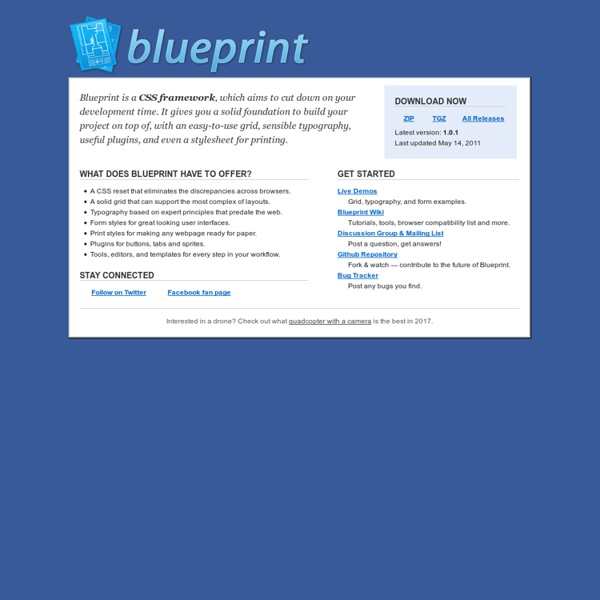 Blueprint is a CSS framework, which aims to cut down on your development time. It gives you a solid foundation to build your project on top of, with an easy-to-use grid, sensible typography, useful plugins, and even a stylesheet for printing. Download Now Latest version: 1.0.1 Last updated May 14, 2011 What does Blueprint have to offer? A CSS reset that eliminates the discrepancies across browsers.

A Closer Look At the Blueprint CSS Framework Blueprint is a CSS framework that can save you time and headaches when working on any project that involves HTML and CSS, whether it be with Rails, PHP, or just laying out an HTML page. In this tutorial you will get a look at the inner workings of Blueprint and we'll take a look at demo application that uses Blueprint to get a better idea of how to use actually use the framework. 1. What is Blueprint CSS? If you are like me, as in more of a developer than a designer, then you are familiar with the process of starting a new project and not knowing what to do with your CSS.

The 1Kb CSS Grid, Part 1 Tyler builds websites and web apps for Vyre in London. CSS frameworks have become quite popular over the past couple of years. Some of them try to fit in everything: a grid system, a style reset, basic typography, form styles, you name it. Others focus solely on the grid, but still end up a bit bloated. With added complexity comes… well, complexity: a steeper learning curve, increased development time, and — cringe — tougher debugging. Here is a fresh take on the CSS grid (loosely based on Nathan Smith’s 960 Grid System).

CSS Grid Positioning Module Level 3 Conformance requirements are expressed with a combination of descriptive assertions and RFC 2119 terminology. The key words “MUST”, “MUST NOT”, “REQUIRED”, “SHALL”, “SHALL NOT”, “SHOULD”, “SHOULD NOT”, “RECOMMENDED”, “MAY”, and “OPTIONAL” in the normative parts of this document are to be interpreted as described in RFC 2119. However, for readability, these words do not appear in all uppercase letters in this specification. All of the text of this specification is normative except sections explicitly marked as non-normative, examples, and notes. 55 Minimal Black and White Web Designs to Inspire You We’ve already shown you Yellow Web Designs and Blue Web Designs, but sometimes less color is the best color choice for a web site. In this post, we’re showcasing 55 minimal black and white web designs to inspire you. The B&W combination is great, from photography to interior design. It’s simplistic, elegant, and gets out of the way to let the content shine.

Prototyping With The Grid 960 CSS Framework Grid 960 is a CSS Framework that enables developers to rapidly prototype designs. They are excellent tools for creating mock ups. Why? Because they do all the heavy lifting allowing you to get faster results. That sounds nice, but how do we do that? Prolonging the magic … A4 sketching paper – Henk Wijnholds Sunday December 27, 2009 Our daily sketching and prototyping work used to focus itself mainly on desktop applications. These days mobile is getting a larger and larger share of our design time.

Grid-Based Web Design, Simplified A Craft Of Consequences: Reader, Writer And Emotional Design Before the very first page of a book has been read, you've already analyzed it in countless ways without even noticing. The paper stock, the thickness of the binding, the aroma, the color of the type and even the texture of the cover; the very character of the book is being dissected by the hand and eye at every moment.

40 Excellent Minimalist Web-Designs From Which To Draw Inspiration Minimalism is beautiful. It truly is. The best part about minimalism in web design is that it comes in many styles, colors and sizes, but they always have the same goal in mind – saying the most while saying the least. A great quote by Albert Einstein can sum up minimalism (in my opinion) 100%. Everything should be as simple as possible, but never simpler.

A Detailed Look at the 960 CSS Framework CSS frameworks are bloated. CSS frameworks are for people who don't know how to code. CSS is too simple to implement a framework. If you've ever read a tutorial on a CSS framework, I can guarantee that many comments mimic the previous statements. The Future of Wireframes As we move into the next decade of web design, it's time for us to reevaluate our understanding of wireframes—a tried and tested user experience staple Riddle me this: How do you piss of a UX professional? The answer: Call him a “designer”. 250+ Resources to Help You Become a CSS Expert CSS is the second-most-important thing you can master when it comes to web design, right after HTML. And the capabilities of CSS can be staggering (especially with the new CSS3 standard already making appearances in some browsers). If you can imagine it, it’s likely someone has already figured out how to do it with CSS. Below are more than 250 resources for mastering CSS. While they’re not likely to make it any less staggering, they can help you master the techniques that will help set your designs apart from the crowd. CSS3 Resources

Fight Div-itis and Class-itis With the 960 Grid System Years ago, HTML tables were the standard for laying out web pages. CSS and semantic thinking changed that, and today CSS frameworks make designing relatively easy. But they can also generate a surprising number of superfluous elements.