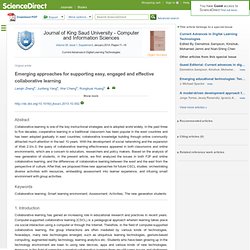 In the past three to five decades, cooperative learning in a traditional classroom has been popular in the west countries and has been adopted gradually in east countries; collaborative knowledge building through online community attracted much attention in the last 10 years. With the development of social networking and the expansion of Web 2.0/x.0, the query of collaborative learning effectiveness appeared in both classrooms and online environments, which are a concern to educators, researchers and policy makers. Education & TIC. Education & TIC. Jigsaws. Developed by Barbara Tewksbury, Hamilton College "When efforts are structured cooperatively, there is considerable evidence that students will exert more effort to achieve - learn more, use higher-level reasoning strategies more frequently, build more complete and complex conceptual structures, and retain information learned more accurately" (Johnson and Johnson, 1999, Making Cooperative Learning Work). 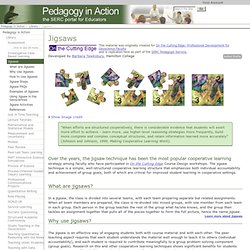 Over the years, the jigsaw technique has been the most popular cooperative learning strategy among faculty who have participated in On the Cutting Edge Course Design workshops. The jigsaw technique is a simple, well-structured cooperative learning structure that emphasizes both individual accountability and achievement of group goals, both of which are critical for improved student learning in cooperative settings. What are jigsaws? In a jigsaw, the class is divided into several teams, with each team preparing separate but related assignments. 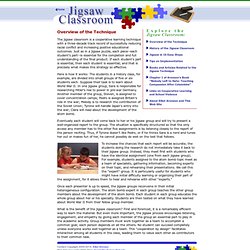 Just as in a jigsaw puzzle, each piece--each student's part--is essential for the completion and full understanding of the final product. If each student's part is essential, then each student is essential; and that is precisely what makes this strategy so effective. Here is how it works: The students in a history class, for example, are divided into small groups of five or six students each. Suppose their task is to learn about World War II. Eventually each student will come back to her or his jigsaw group and will try to present a well-organized report to the group. To increase the chances that each report will be accurate, the students doing the research do not immediately take it back to their jigsaw group. Peer-Led Team Learning. Developed Pratibha Varma-Nelson, Indiana University Purdue University Indianapolis What is Peer-Led Team Learning? 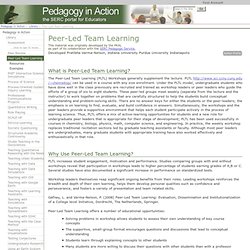 The Peer-Led Team Learning (PLTL) Workshops generally supplement the lecture. PLTL can be used in a course with any size enrollment. Under the PLTL model, undergraduate students who have done well in the class previously are recruited and trained as workshop leaders or peer leaders who guide the efforts of a group of six to eight students. These peer-led groups meet weekly (separate from the lecture and the instructor) to work together on problems that are carefully structured to help the students build conceptual understanding and problem-solving skills. Rethinking Developmental Math. MIST: Treisman's Model. Model Overview: Collaborative learning: Faculty sponsorship: Additional Uri Treisman Links: Model Overview: In the late 1970's and early 1980's, graduate student Uri Treisman at the University of California, Berkeley, was working on the problem of high failure rates of minority students in undergraduate calculus courses. 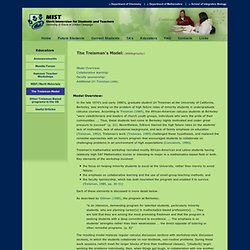 According to Treisman (1985), the African-American calculus students at Berkeley "were valedictorians and leaders of church youth groups, individuals who were the pride of their communities. ... Thus, these students had come to Berkeley highly motivated and under great pressure to succeed'' (p. 21). Nevertheless, folklore blamed the high failure rates on the students' lack of motivation, lack of educational background, and lack of family emphasis on education (Treisman, 1992). Treisman's mathematics workshop recruited mostly African-American and Latino students having relatively high SAT Mathematics scores or intending to major in a mathematics-based field or both.