Daniel Pink on the surprising science of motivation 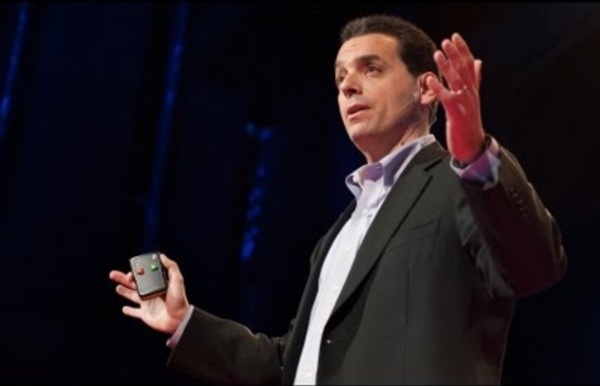 Relationships Matter More Than Rules But after sharing rules and expectations, how about transitioning into sharing a few slides and artifacts that tell students about you? There’s general information you can share (details about your family, where you went to school, jobs you had before teaching, etc.), but you can add a few more vulnerable glances into your life: What struggles did you have growing up? As a student? What do you value? Learn how to Study Using... Retrieval Practice By: Megan Smith & Yana Weinstein The purpose of today’s post is to give students a resource to help them take charge of their own learning. We’re going to do a series of these over the next few weeks; today’s post is about retrieval practice – a useful method for studying any material that you’d like to remember in the future. What is retrieval practice? Retrieval practice involves recreating something you’ve learned in the past from your memory, and thinking about it right now. In other words, a while after you’ve learned something by reading it in a book or hearing it in a class or from a teacher, you need to bring it to mind (or “retrieve” it).

Kelly - David Kolb, The Theory of Experiential Learning and ESL The Internet TESL Journal Curtis Kellyctskelly [at] [at] gray.plala.or.jpHeian Jogakuin College (Osaka, Japan) It will soon be twenty years old, but the Theory of Experiential Learning has had little presence in ESL. "Experiential" learning is not just "fieldwork" or "praxis" (the connecting of learning to real life situations) although it is the basis for these approaches, it is a theory that defines the cognitive processes of learning. In particular, it asserts the importance of critical reflection in learning. As we shall see, David Kolb was one of the key contributors. Background: 20th Century Theories of Learning

Out of Sight, Till Now, and Giving Away Billions Rumpled by habit, limping on old knees, smiling faintly after a night of celebration, Chuck Feeney stepped out of a building on Park Avenue Monday night and vanished, carried away on a river of passing strangers who knew nothing about him. Perfectly disguised as an ordinary man, Mr. Feeney, one of the most generous and secretive philanthropists of modern times, had dropped from sight once again. It is a skill he mastered over decades. Last year, the foundation Mr. Feeney created, the Atlantic Philanthropies, gave $458 million in grants around the world, more than any United States charity except two, the Ford and the Bill and Melinda Gates Foundations.

Working backward to solve problems - Maurice Ashley See Maurice Ashley's blog here. He's the international chess grandmaster, and his motto is, "Your passion is your window to the world." In chess, retrograde analysis is a computational method used to solve game positions for optimal play by working backward from known outcomes (e.g. checkmate), such as the construction of endgame tablebases. All About Me Bags On the first day I share items that tell the class something about me. I put 5 items in a lunch bag and pull one out at a time, sharing a little bit about myself. I have a photo of my dog, a poem that I wrote, and then some other fun items. My student teacher also shared items this way.

Three, Google, Converse: The top 10 YouTube ads in August 1. Three UK – Go Roam with easyJet Three is celebrating its partnership with EasyJet by resurrecting an old favourite – a giraffe-flamingo hybrid named Giraffamingo. Set to Sofia Reyes’ hit ‘123’ featuring Jason Derulo and De La Ghetto, the spot shows Giraffamingo strutting its way through the airport making the most of the ‘Hands Free’ offer, which is designed to speed up the bag check process and create a seamless travel experience. The sassy mascot also reveals how, as part of the partnership, consumers can use their phone abroad in up to 71 countries worldwide with Three at no extra cost.

Jean Lave and Etienne Wenger - Community of Practice As new practitioners discuss their problems with their fellows, or learn from their colleagues how to integrate the practice with the rest of their business workflow; in such a way, the CoP becomes a repository and dissemination mechanism combined for best practice - Etienne Wenger Communities of Practice: Learning, Meaning, and Identity (1998). Jean Lave and Etienne Wenger pioneer the concept of a Community of Practice (CoP) in their book, Situated Learning: Legitimate Peripheral Participation. (1991) They theorized that knowledge can be developed through social and spontaneous communities that are driven by common interests and passions, whereas innovation lies in the interaction between different communities. A community of practice defines itself along three dimensions: What it is about: A joint enterprise as understood and continually renegotiated by its members.

How to Break into a Field That Seems Un-break-into-able Good Life Project is a weekly web show that features in-depth interviews with acclaimed artists, entrepreneurs, creators, and world-shakers. To receive the mp3 version of our shows, please sign up here. How many people dream of traveling the world, photographing everything, from fashion models to passion causes, and being extraordinarily compensated for the work? I’m guessing more than a few…million! And, okay, even I confess to occasionally letting my Instragam-fueled shooting frenzies lure me into the occasional daydream of becoming a globetrotting professional photographer. For graphic designer turned highly sought after commercial photographer, Nick Onken, though, that fantasy became a reality.

What makes a hero? - Matthew Winkler The Hero Archetype in Literature, Religion, and Popular Culture: (along with a useful PowerPoint presentation teachers can download at this URL: ) Maricopa Center for Learning and Instruction (users embark on their own hero's journey): An American Masters Lesson from PBS for Teachers on George Lucas, the Power of Myth, and the Hero's Journey: And an interactive approach to the Hero's Journey: And of course, information about Joseph Campbell's works on the subject, on the Joseph Campbell Foundation site: The Hero With A Thousand Faces

Motivating Students Introduction Fostering student motivation is a difficult but necessary aspect of teaching that instructors must consider. Many may have led classes where students are engaged, motivated, and excited to learn, but have also led classes where students are distracted, disinterested, and reluctant to engage—and, probably, have led classes that are a mix. What factors influence students’ motivation? 5 things to know about the future of jobs The future of work is increasingly becoming today’s reality for millions of workers and companies around the world. The findings of our latest Future of Jobs Report look at the trends expected in the 2018-2022 period in 20 economies and 12 industry sectors. Here is what you need to know to be ready: 1. Automation, robotization and digitization look different across different industries

David A. Kolb on experiential learning. Contents: introduction · david a. kolb · david kolb on experiential learning · david kolb on learning styles · issues · developments – jarvis on learning · a guide to reading · links · how to cite this piece As Stephen Brookfield (1983: 16) has commented, writers in the field of experiential learning have tended to use the term in two contrasting senses. On the one hand the term is used to describe the sort of learning undertaken by students who are given a chance to acquire and apply knowledge, skills and feelings in an immediate and relevant setting. The Educated Entrepreneur's Blog A fellow entrepreneur gave me a slight nudge today that motivated me to post today’s blog. I think you will certainly find value in it as it incorporates some of the best minds of the 21st century. Remember….. The secret to learning as an entrepreneur is to mix equal parts of inspiration and perspiration.