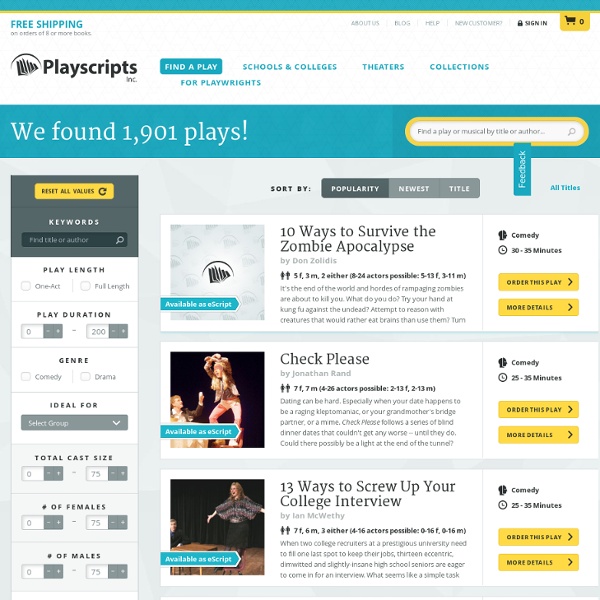 YouTube Converter &Download - ClipConverter.cc Improv Everywhere | We Cause Scenes 10 Things I Wish I&d Been told in College (and 1 I was) | Cambiare... Everyone loves lists. Well. I love lists, and while there’s been a lot of talk over my three years actively blogging about theatre about the failings of the Theatre Education Industrial Complex, we’ve not really attempted to create a curriculum we approve of. Largely because, well, creating a new theatre education paradigm is hard. Instead? I also want to include the one thing I WAS told outside the framework of the program that really helped. In no particular order: Read Everything. The one Real thing I was told off the record was by Nancy Saklad. “You can do this you know. After 5 years of college and 3 years in high school she was the first person who ever said such a thing to me. “But you have to work at it.”

A 1945 Code of Ethics for Theatre Workers Surfaces | LA STAGE TIMES Mayor Eric Garcetti “was proud to host the Los Angeles arts community at City Hall to hear ideas about showcasing LA as the Creative Capital of the World,” according to his Facebook page. His social media writers were referring to his appearance before a roomful of arts and foundation leaders last week. The Facebook post didn’t take note of the other half of Garcetti’s message — that he won’t provide any additional city money for the arts. But he intends to help raise private money for them, as part of his “showcasing” efforts. I didn’t hear him mention LA theater except in this brief snippet: “Don’t come to me with ‘My theater company needs [fill in the] blank. After Garcetti spoke and then answered a few questions from the audience, he left. Anyway, I’m glad that Garcetti has the arts on his mind, as well as his many other issues. Yes, east Hollywood. And so diversity is part of the fabric of Schlomo. Schlomo goes down dark paths. The kids around me seemed to eat it up.

13 Docs That Theatre Lovers Should Know After yesterday’s lengthy survey of fictional films about theatre, I would be remiss in not sharing with you a baker’s dozen documentaries about theatre, most of which are probably even more obscure than some of their fictional counterparts. Unlike the films cited yesterday, which stretch over an almost 80 year period of filmmaking, the oldest of those listed below dates back just 40 years, and the majority are much more recent than that. This likely stems from two key factors: a) the rise of documentary, cinema verite filmmaking began to proliferate only in the 1960s, and even more recently, b) the advent of high quality digital video cameras, which significantly reduced the expense of shooting documentaries. Outside of valuable archives like the New York Public Library’s Theatre on Film and Tape Collection at Lincoln Center, the net result of making theatre, namely the show itself, is all too fleeting, even for those that manage sustained runs.

Shortcut ot Improv: Say it like you mean it Don't forget to read the Disclaimers Shortcuts to improv: Say it like to mean it. One of the easiest, yet most overlooked, tricks in improv performance is the simple act of speaking definitively. When you are on stage, and the time comes for you to say anything, what comes out of your mouth should be clear, to the point, and most of all said in a loud, steady, unwavering voice – as if to say “I know exactly what the hell I’m talking about.” All too often, players on stage speak in mumbled, meek, meager, tones of voice. Other times, players decide that the best course of action is to rapidly blurt out as many words as possible, heaping one outrageous statement onto the next; the assumption being that the law of large numbers will be on their side, and somehow, magically, if they say enough in one sentence and overwhelm the enemy with verbal assaults then something in there must certainly be “right”. And then amazingly, strange as it may seem, the scene goes absolutely nowhere. - The Fears - or