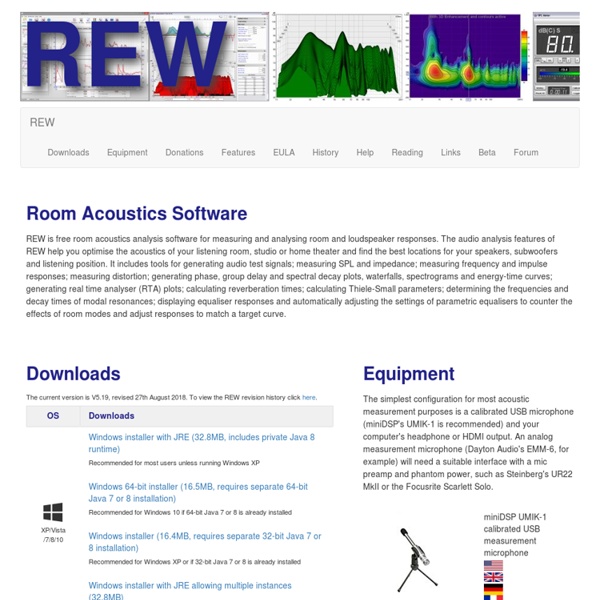 PHS If you have been searching for an extremely powerful yet cost effective solution to your acoustic and vibration test and measurement needs then you have found the right place. Click here for a short introductory video -> We offer two solutions depending on your application requirements and budget: SpectraPLUS-SC works with low cost Windows compatible sound cards. Two channels of signal analysis are supported with up to 200 kHz sampling rates at up to 24 bit precision.

SATlive® Audio Measurement Tool HOME News: New Version 1.60.02 What's new? learn studio design, treatment methods and tools used. On the left is the expected response based on the rooms dimensions, on the right is a screen shot of the results from REW. There is a large margin for error here as the room is full of furniture, and there is an archway and window sills to take in to account. On comparing the two sets of results there are clear correlations between the response plot on the right and the room mode plot on the left. Most notably between 400 and 500 Hz, were there is a rise and a dip, but this is not the only correlation.

How To Set Up a Room More RealTraps Articles Straight talk about finding the ideal loudspeaker placement and listening position. "You'll get the flattest low frequency response by sitting 38 percent of the way back in the room." "This is equivalent to a bank shot in pool." With special thanks to Bill Eppler for providing the first reflection calculations, and to acoustics guru Wes Lachot. The following is from a newsgroup post where Wes explained his logic behind the 38 percent rule. FuzzMeasure FuzzMeasure Pro 3 delivers a comprehensive suite of features geared towards professionals in the acoustics, live sound, and recording industries. By combining a complete toolset with an elegant yet simple user interface, FuzzMeasure Pro 3 lets you capture all the measurements you need without getting in your way. Overview FuzzMeasure Pro is an audio and acoustical measurement application used to create, produce, and analyze visually stunning graphs of your measurements. Using FuzzMeasure’s tools you can easily gather measurements of a home theatre system, recording studio, stage, auditorium, raw loudspeaker components, and more.

Products mh acoustics’ patented Eigenmike® microphone array is composed of many professional quality microphones positioned on the surface of a rigid sphere. Eigenmike® microphone array technology is a two-step process: First the outputs of the individual microphones are combined using digital signal processing to create a set of Eigenbeams. A complete set of Eigenbeams capture the soundfield up to the spatial order of the beamformer.

Acoustics So you want to setup a studio so why worry about acoustics and what are acoustics anyway? Let me tell you a story as I heard it from the late Dean Jensen who I stayed with in the early seventies when he was the top techo in LA. --- According to Dean in the early seventies some of the engineers of The Record Plant (one of LA's top studios ) were sitting on the roof of their building after a long party. They had taken some speakers from the studio up to the roof for the party and were discussing the fact that the speakers sounded great on the roof but were pretty awful downstairs in their control room! Why??

Fletcher–Munson curves The Fletcher–Munson curves are one of many sets of equal-loudness contours for the human ear, determined experimentally by Harvey Fletcher and Wilden A. Munson, and reported in a 1933 paper entitled "Loudness, its definition, measurement and calculation" in the Journal of the Acoustic Society of America.[1] Background[edit] The first research on the topic of how the ear hears different frequencies at different levels was conducted by Fletcher and Munson in 1933. In 1937 they created the first equal-loudness curves.[2] Until recently, it was common to see the term 'Fletcher–Munson' used to refer to equal-loudness contours generally, even though a re-determination was carried out by Robinson and Dadson in 1956, which became the basis for an ISO 226 standard.

Room EQ Wizard Tutorial - GIK Acoustics Room EQ Wizard tutorial presented by GIK Acoustics. In this video we take you through downloading, installing, and using Room EQ Wizard. You will learn how to set up your microphone and calibrate your soundcard, as well as how to take a room test measurement. You will also learn how to set up the limits and viewing ranges for the frequency response graphs and we show you how to generate a waterfall graph. Octave smoothing and overlays are shown as well. To download Room EQ Wizard, go to Then register on the Home Theater Shack forum if you haven’t already.

Dirac Dirac is a sophisticated tool to calculate a very wide range of acoustical parameters from impulse response measurements of an enclosure. Through many years of development and customer feedback, Dirac has grown to support many different applications. Due to its user friendly interface it is suitable for field measurements, but it also contains many advanced features that make it useful in a laboratory or research setting. To capture an impulse response, a stimulus signal is generated by Dirac or an external source. This stimulus signal is played in the enclosure through a sound source, and recorded through a microphone. Dirac then deconvolves the recorded response with the original stimulus to arrive at the impulse response.

AudioTools Modules Impulse Response Smaart® Tools Transfer Function STI-PA Module Pricing AudioTools includes a base set of apps in the initial purchase price, and then has a number of optional modules that you can purchase from within AudioTools at any time as in-app purchases. Speakers Go to manufacturer's links As discussed in the opening page, the car and open air are good listening environments because they have either no reverberation or a controlled reverberation field. One of the key points was the flush mounting of the car speakers. By building your speaker boxes into the wall you can tighten the bottom end of the whole system because you eliminate the reflections that emanate from the back of the speaker, hit the wall and then come back to you in and out of phase. Here the sound from each speaker comes back off the walls and creates a general mayhem of frequencies in the middle where the engineer would probably be sitting. In the open air the sound waves are passing you and never come back.