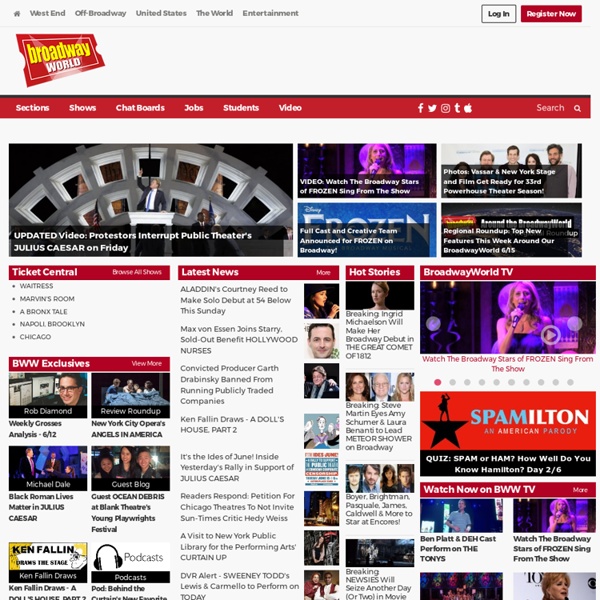 UnCaged Toy Piano | toy piano composition competition and festival Music Longlist Who deserves APRA song of the year? PETER VINCENT 11:02am Songs by Vance Joy, Flume, Gurrumul Yunupingu, Nick Cave and Sarah Blasko are among those to make the longlist for 2014 song of the year, as voted by members of Australia's music rights and royalties organisation. AC/DC to split: report Caroline Zielinski and Bernard Zuel 1:55pm AC/DC may be announcing their retirement as soon as Tuesday, according to media reports. Mental notes Bernard Zuel Chet Faker opens up on his debut album. Two's company when cellists go travelling Clarissa Sebag-Montefiore When two-time Grammy Award winner Lynn Harrell takes a flight, he always books two seats: one for himself and one for his multimillion-dollar, centuries-old cello. Keep the peace Samuel J. Life in the slow lane Bronwyn Thompson After a hectic stint on the road, Jordie Lane is looking for balance once more. Doobies forever History repeats

Alice Cunningham Fletcher Alice Cunningham Fletcher (March 15, 1838, Havana - April 6, 1923, Washington, D.C.) was an American ethnologist who studied and documented American Indian culture. Biography[edit] Fletcher credited Frederic Ward Putnam for stimulating her interest in American Indian culture and began working with him at the Peabody Museum of Archaeology and Ethnology, Harvard University.[1] She studied the remains of the Indian civilization in the Ohio and Mississippi valleys, and became a member of the Archaeological Institute of America in 1879. These times also marked the beginning of Fletcher's 40-year association with Francis La Flesche, Susette's half brother. She was made assistant in ethnology at the Peabody Museum in 1882, and in 1891 received the Thaw fellowship, which was created for her.[1] Active in professional societies, she was elected president of the Anthropological Society of Washington and in 1905 as the first woman president of the American Folklore Society. Notes[edit] Attribution

From the front of the choir: Singing is all about listening I wrote last week about people who think they can’t ‘sing’ because they think they need training or singing lessons first (Your singing voice: if it ain’t broke, don’t fix it!). We focus so much on our mouths and what comes out of them, that often we forget one of the most important aspect of singing: listening. listening to your own voice This is what we tend to do the most of. We worry if it’s any good, if we’re getting the notes in the right order, what other people might think of us, why our singing voice is such rubbish, if we’ve remembered the instructions from last rehearsal. The problem is, if we focus too much on ourselves and the production of sound, we stop being part of the choir or the song and become a self-centred island. When we’re new to this choir lark or when we’re particularly nervous, our tendency is to focus inwards and worry about ourselves. listening to others in your part But that’s not enough if you’re singing a song in harmony. listening to the overall sound

‘Botanica,’ a Drama Directed by Jim Findlay If you’ve ever wondered what a plant being Tasered sounds like, wonder no more. In “Botanica,” Jim Findlay’s overripe juxtaposition of scientific jargon and randy flora, the wildlife endures that and much, much more. Mr. Findlay has moved to the director’s chair after nearly two decades of creating beguiling visuals for a Who’s Who of downtown theater practitioners (the Wooster Group, Collapsable Giraffe, Cynthia Hopkins, Ridge Theater). Some 200 plants cover every visible surface of the set (Peter Ksander handles the duties here), a giant terrarium that also houses three humans. Their often nefarious experiments, complete with a barrage of bleeps, bloops and zaps that will be familiar to Wooster Group devotees, involve the aforementioned Taser, along with some violent threats: “We will isolate you in a closet.” But just as a botanical insurrection seems imminent —a sort of “Rise of the Planet of the Azaleas” — things take a kinkier and daffier turn.

A Performance That Should Be Remembered Liang Tao's "Hermafroditism I-The big leap forward" performance took place on October 22, 2005 in the old courtyard house turned into the then-trendy "BED" bar. (all images courtesy the author) BEIJING — Whenever I find myself strolling in the hutongs near Gulou and see the entrance of Bed Bar, images of Liang Tao‘s 2005 cross-gender performance come to mind. I met her that same year in the 798 art district, just after her performance “Madhouse in Paradise” at Marella Gallery. For that piece she built a replica of a room from a Western mental institution, in which she spent two days as a “perfectly happy” schizophrenic patient. Her point was that, after having spent a period of time in a Chinese mental institution, a Western one would be quite a nice place to live. More than the topic or message, I was struck by the formal and conceptual precision of the work. When she is well, she likes to talk about art and life. A set of balloons, pale blue, white and pink, was positioned nearby.

Hyperallergic — Sensitive to Art and its Discontents Free AutoCAD DWG Viewers (Between the Lines) If you are looking for free, easy, and accurate ways to view an AutoCAD DWG here are two great options using native DWG technology from Autodesk. First a desktop DWG Viewer – DWG TrueView There is the Windows based desktop application named DWG TrueView which can not only view 2D and 3D DWG files but even includes layer features, visual styles, measurement, and print/plot feature of the full AutoCAD. You can view not only the DWG files created with AutoCAD 2012 but read DWG files from the early 1980’s from AutoCAD 2.x and even batch convert DWG files to different several versions. It is a hefty 270Mb download but it is very powerful and free. Desktop DWG Viewing: Autodesk DWG TrueView A web and mobile DWG Viewer – AutoCAD WS and AutoCAD WS Mobile AutoCAD WS is a web and mobile based DWG viewer with markup and collaboration. Web and Mobile DWG Viewing AutoCAD WS Web and Mobile DWF Viewing Cheers, Shaan

MaKey MaKey: An Invention Kit for Everyone (Official Site) The Movies and Ethnic Representation: Native Americans Disney. This animated story begins when the hero of Wendy, John and Michael's bedtime stories--Peter Pan--returns to the nursery and invites them on a magical journey to Never Land. With the help of Tinker Bell, his feisty sidekick, and a dazzling shower of pixie dust, Peter Pan teaches them to fly. Off they soar to an enchanted island filled with wonder and adventure. Before they know it, they're knee-deep in a high-flying battle with swashbuckling pirates, led by Peter's arch enemy, Captain Hook--whose time is nearly up against a ticktocking crocodile. "...the books [by British novelist and playwright J. "Once the Injun didn't know/ all the things that he know now / But the Injun he sure learn a lot/ And it's all from asking "How" What made the red man red/ Let's go back a million years/ to the very first Indian Prince He kiss a maid and start to blush/ and we've all been blushin' since."

A 1945 Code of Ethics for Theatre Workers Surfaces | LA STAGE TIMES Mayor Eric Garcetti “was proud to host the Los Angeles arts community at City Hall to hear ideas about showcasing LA as the Creative Capital of the World,” according to his Facebook page. His social media writers were referring to his appearance before a roomful of arts and foundation leaders last week. The Facebook post didn’t take note of the other half of Garcetti’s message — that he won’t provide any additional city money for the arts. But he intends to help raise private money for them, as part of his “showcasing” efforts. I didn’t hear him mention LA theater except in this brief snippet: “Don’t come to me with ‘My theater company needs [fill in the] blank. We need you to think broadly’.” After Garcetti spoke and then answered a few questions from the audience, he left. Anyway, I’m glad that Garcetti has the arts on his mind, as well as his many other issues. Yes, east Hollywood. And so diversity is part of the fabric of Schlomo. Schlomo goes down dark paths.