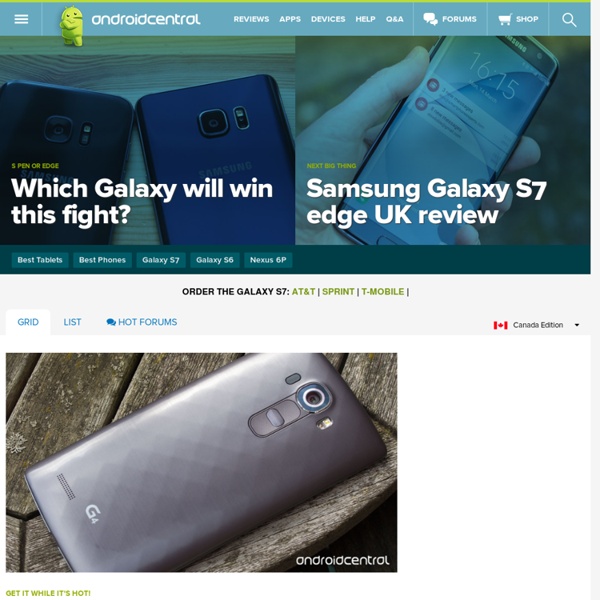 Samsung Gear S hands-on So here we are with Samsung's sixth — yes, a full half-dozen — smartwatch in a little more than the space of a year. To wit: The Samsung Galaxy Gear, Gear 2, Gear 2 Neo, Gear Fit, Gear Live and, now, the Gear S. That's a whole lot of Gear. This Gear, however, is unlike the other Gear(s). Well, OK. The rise of mobile apps and the decline of the open web — a threat or an over-reaction? As the use of mobile devices continues to climb, the use of dedicated apps is also increasing — but is this a natural evolution, or should we be worried about apps winning and the open web losing? Chris Dixon, a partner with venture-capital firm Andreessen Horowitz, argues in a recent blog post that we should be concerned, because it is creating a future in which the web becomes a “niche product,” and the dominant environment is one of proprietary walled gardens run by a couple of web giants — and that this is bad for innovation. Dixon’s evidence consists in part of two recent charts: one is from the web analytics company comScore, and shows that mobile usage has overtaken desktop usage — an event that occurred in January of this year. The second chart is from Flurry, which tracks app usage, and it shows that apps account for the vast majority of time spent vs. the mobile web, an amount that Flurry says is still growing. If apps are winning, is the web losing?

DOWNLOAD An Android Guide : These Are The Droids You’re Looking For Learn everything you want to learn about Android, for free! This Android Guide”, by author Matt Smith, is another free manual from MakeUseOf.com. Outlining the ins and outs of Android, this guide covers basic everything from basic usage to rooting your phone, and is a must-have if you use Google’s smartphone OS. How To Get Rid Of That Annoying 'Ok Google' On Your Android Wear Watchface Some of you Android Wear users out there may have taken notice of something that has become quite a few people’s pet peeve. We are talking about the ‘Ok Google’ that pops-up on top of the watchface of your Android Wear device. This pops-up to let users know that they are able to say “Ok Google” into their Android Wear device to trigger Google Now, the problem with this is that figuring that out is a one time thing.

Wholesale Product Snapshot Product name is Original OnePlus Two 2 4GB RAM 64GB ROM 4G LTE Mobile Phone Snapdragon 810 Octa Core Fingerprint ID 5.5'' 1920*1080P 13MP Camera Firstly, we provide more than 9 popular models to snap up on 11th Nov, 5.99$ you can get a phone, good luck. Secondly, the price for this model will be $415.99 on 11th Nov, Stay tuned. Thirdly, If you add any accessories, you will be able to get $10 coupon. The Best Android Phone, Spring 2014 Samsung Galaxy S6 The Samsung Galaxy S6 has the best display and camera of any Android phone, and it's the best-looking phone Samsung's ever made. The UI is still a bit complex, but the phone is the best overall package for most people. The Galaxy S6’s fingerprint reader is the best you can get outside of Apple’s Touch ID; the phone supports wireless charging; and the S6 includes an IR blaster, an NFC chip, quick charging, and a new way of paying with your phone on normal credit card readers that non-Samsung phones won’t have. With other phones you might get a few of these other features, but the Galaxy S6 has all.

Google Chromecast 4K Is All Set To Launch Chromecast offers a great way to browse top-class content. Moreover, people will get an easy access to the keyboard, which is integrated within the screen only. The applications that run in Chromecast are fast and highly responsive. Google Chromecast has successfully blended a highly-simplified interface with the big TV screen. HTC One A9 vs Nexus 5X, Moto X Play, OnePlus 2, Galaxy A5, Xperia M5: What's the difference? HTC has officially announced the much-rumoured One A9 smartphone. It comes with a lovely premium build and some good specs, even if they don't quite hit flagship territory. We have put HTC's new device up against a few of the other mid-range Android smartphones that we think matches it on the spec-front.