The age of $25 smartphones is upon us—and Mark Zuckerberg wants to give them a dial tone. Mozilla plans '$25 smartphone' for emerging markets. 23 February 2014Last updated at 13:57 ET The phone is only at the prototype stage for now Mozilla has shown off a prototype for a $25 (£15) smartphone that is aimed at the developing world. 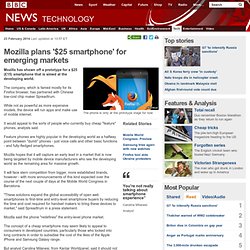 The company, which is famed mostly for its Firefox browser, has partnered with Chinese low-cost chip maker Spreadtrum. While not as powerful as more expensive models, the device will run apps and make use of mobile internet. MTN Steppa – “most affordable high performance smartphone ever” MTN plans to shake up the South African smartphone market with its Steppa device, offering a high performance Android phone at well below R1,000. 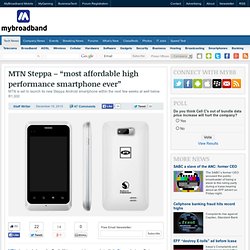 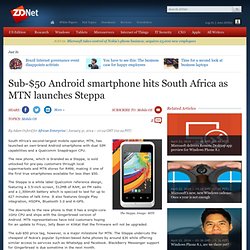 The new phone, which is branded as a Steppa, is sold unlocked for pre-pay customers through local supermarkets and MTN stores for R499, making it one of the first true smartphones available for less than $50. The Steppa is a white label Qualcomm reference design, featuring a 3.5-inch screen, 512MB of RAM, an FM radio and a 1,300mAh battery which is specced to last for up to 627 minutes of talk time. It also features Google Play integration, HSDPA, Bluetooth 3.0 and A-GPS.

How Tecno Is Wining The Smartphone War In Nigeria. While Samsung has finally dethroned Nokia as the World’s largest phone vendor, it may have to engage in another battle for dominance in Nigeria; a country with the biggest Africa Smartphone market and powering millions of active mobile lines. 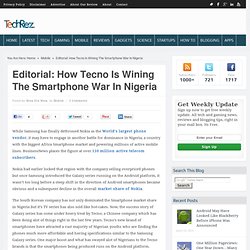 BusinessNews places the figure at over 110 million active telecom subscribers. Nokia had earlier locked that region with the company selling overpriced phones but once Samsung introduced the Galaxy series running on the Android platform, it wasn’t too long before a steep shift in the direction of Android smartphones became obvious and a subsequent decline in the overall market share of Nokia. The South Korean company has not only dominated the Smartphone market share in Nigeria but it’s TV series has also sold like hot-cakes. Now, the success story of Galaxy series has come under heavy treat by Tecno; a Chinese company which has been doing alot of things right in the last few years.

Tip: 5 Reasons To Root Your Android Device Specification: TECNO Phantom A+ Was The Best Selling Smartphone of 2013 [REPORT] Leading online retailer, Konga has released shopping trends on its site for 2013 which shows Samsung and TECNO products leading the pack with top sales for the year. 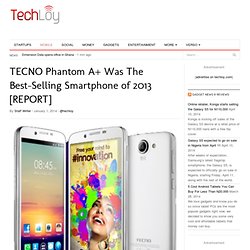 According to the report, the best selling smartphone of the year was the TECNO Phantom A+, ranked based on the number of search queries on its site, total number of purchases and total number of requests on its social media channels. The TECNO Phantom A+, a 5.0-inch smartphone running Android OS 4.2.2 Jelly Bean with a brilliant 8.0 mega pixel primary and 1.2MP front facing camera, comes with a 1.2GHz Quad Core Processor, 1024MB of RAM, 4GB built-in storage, a Dual SIM slot and a 2100mAh battery capacity. The company also revealed that the most anticipated tech gadget launches of the year were the Sony Playstation 4 console and the TECNO Phantom A3 smartphone based on number of search queries on its website and total number of orders and sales. Konga Kulture Konga.com Trends 2013; How Nigerians Shopped This Year. » Blog. TECNO Mobile. Tecno Phones - Buy Latest Tecno Mobile Phones Online. TECNO penetrates smartphone market with new Phantom AIII. Mobile phone Company, TECNO Mobileis looking to further deepen smartphone penetration and expand its market share in Nigeria, with the launch of the latest addition smartphone to its phantom family, the Phantom AIII. 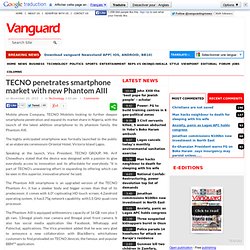 The highly anticipated smartphone was formally launched to the public at an elaborate ceremonyin Oriental Hotel, Victoria Island Lagos. Speaking at the launch, Vice President, TECNO GROUP, Mr. Arif Chowdhury stated that the device was designed with a passion to give everybody access to innovation and its affordable for everybody. “It is part of TECNO’s unwavering effort in expanding its offering which can be seen in this superior, innovative phone” he said. The Phantom AIII smartphone is an upgraded version of the TECNO Phantom A+, it has a sleeker body and bigger screen than that of its predecessor, it comes with 6.0” captivating HD touch screen, 4.2android operating system, it has3.75g network capability, with1.5 GHz quad core processor. 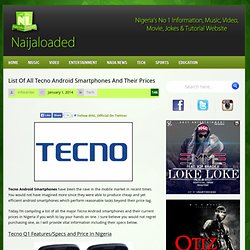 You would not have imagined more since they were able to produce cheap and yet efficient android smartphones which perform reasonable tasks beyond their price tag. Today I’m compiling a list of all the major Tecno Android smartphones and their current prices in Nigeria if you wish to lay your hands on one. I sure believe you would not regret purchasing one, as I will provide vital information including their specs below.

What a $70 smartphone means for mobile in Africa. — What I Learned Today. 99,2% of internet connect​ions go through mobile devices in Kenya (THIS is the leapfrog)… During the month I spent in East Africa, I bought a cheap feature phone for day-to-day communications (along with the m-pesa mobile banking system ) and used a tablet for the Internet. 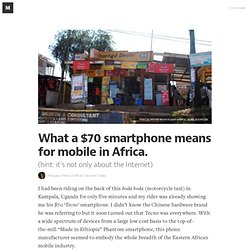 I would therefore follow the path of 99,2% of Internet consumers not using a computer: except for a selective overlap with computer use at cyber cafes, Internet is deeply mobile in Kenya. The reasons might be simple to spot. In terms of hardware, phones are cheap and their battery last longer. For software and as mobile become the most relevant Internet point of consumption, big players such as Google and Facebook have to abide by the local usage and push this usage forward with initiative such as free service Facebook Zero. $80 Android Phone Sells Like Hotcakes in Kenya, the World Next? Hwawei's IDEOS smartphone is making waves in Kenya. 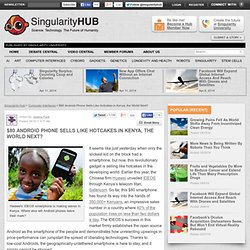 Where else will Android phones leave their mark?