Learning Vim in 2014: Getting More from Vim with Plugins. Vim Scripts. Editor - Favorite (G)Vim plugins/scripts? Sydney, Australia Ruby on Rails Developers. Despite being 23 years old, Vim experienced a resurgence of interest in the Rails community. 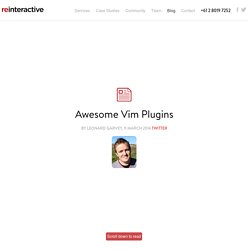 This isn't surprising when you consider that Rails itself is very command-line driven so using an editor which also fits in with the command-line works very well. Luckily for us Rails developers there is a huge eco-system of awesome plugins for Vim which make it significantly more powerful and speed up Ruby on Rails development. Getting started with Vim Vim is notoriously difficult to learn, but the most important concept to remember is that it is a modal editor. There is "normal" mode which lets you type commands to be processed by Vim, "insert" mode allows you to enter and edit text. If you're really just getting started with vim, open your command-prompt and type 'vimtutor' and press enter. There are a couple of important modifier keys.

Ctrl - for keybinds this is represented as: <C-x> if you wanted to bind Ctrl-x to something. Plugins A plugin manager Navigation Unite nnoremap <Leader>f :Unite grep:. Sydney, Australia Ruby on Rails Developers. 5 Essential VIM Plugins That Greatly Increase my Productivity. There are a lot of VIM plugins to choose from. 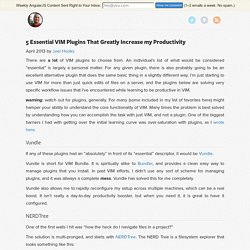 An individual’s list of what would be considered “essential” is largely a personal matter. For any given plugin, there is also probably going to be an excellent alternative plugin that does the same basic thing in a slightly different way. I’m just starting to use VIM for more than just quick edits of files on a server, and the plugins below are solving very specific workflow issues that I’ve encountered while learning to be productive in VIM. warning: watch out for plugins, generally. For many (some included in my list of favorites here) might hamper your ability to understand the core functionality of VIM. Vundle If any of these plugins had an “absolutely” in front of its “essential” descriptor, it would be Vundle.

Vundle is short for VIM Bundle. Vundle also allows me to rapidly reconfigure my setup across multiple machines, which can be a real boost. NERDTree One of the first walls I hit was “how the heck do I navigate files in a project?” The 15 Best Vim Plugins : spf13.com. One of the things that makes vim great is that it can be extended through plugins.

There are plugins for more than you would expect. I have gathered together the 15 best plugins. I’ve included these plugins as part of my ultimate VIM configuration which has been featured on many sites and is hosted on github. I’ve also begun a series of posts on some of these plugins including snipmate and NerdCommenter. General Related Posts SuperTab Do all your insert-mode completion with Tab. ShowMarks Visually shows the location of marks. SearchComplete Provides tab completion while inside the “/” search Programmer Tag List taglist.vim : Source code browser (supports C/C++, java, perl, python, tcl, sql, php, etc).Requires the exuberant ctags utility. SQLComplete. Plugins - Best of Vim. Vim is great out of the box, but there are plenty of great plugins to extend the main editor, and provide tailored functionality for working with specific languages, frameworks & environments.

Pathogen should probably be the first plugin you install, as it'll make installing all the others easier. After that, have a hunt around & see what tickles your fancy... Boilerplate code: Unavoidable. Now easy. Find files, every if you can't remember where they are or what they're called. List & choose from all your open buffers. A huge improvement to Vim's built-in directory browser. An easy way to make large, precise jumps within a buffer. Easily manipulate surrounding quotes, braces, tags and more. Extend % to match more than just braces. Vim has a very sophisticated undo/redo model. Easily switch between header & code files: .h <-> .c Improved search & replace to handle mixed-case & plurals.