GreenPower. The GreenPower Program (the Program) is a government managed scheme that enables Australian households and businesses to displace their electricity usage with certified renewable energy, which is added to the grid on their behalf. 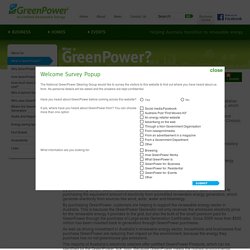 The Program was launched in 1997 after considerable consultation with the energy industry and various non-government organisations including the Australian Consumers Association (now Choice), Greenpeace, the Australian Conservation Foundation and the World Wide Fund for Nature. ESAA - Green energy: we like it, but we don't buy it. Recent Essential Report and Climate of the Nation surveys have again shown that a strong majority of Australians are supportive of renewable energy. 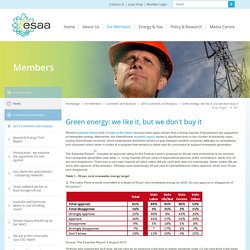 Meanwhile, the GreenPower quarterly report, shows a significant drop in the number of electricity users buying GreenPower products, which emphasises that there remains a gap between positive consumer attitudes on renewables and consumer action when it comes to a program that remains a viable way for consumers to support renewable generation. The Essential Report[i] included an approval rating for the Federal Labor’s proposal for 50 per cent of electricity to be sourced from renewable generation (see table 1). A big majority (65 per cent) of respondents approve of the commitment, while only 16 per cent disapprove.

There was a very high majority of Labor voters (84 per cent) and, also not surprisingly, Green voters (96 per cent), who approve of the ambition. Table 1 - 50 per cent renewable energy target Table 2 - Electricity costs Conclusion. Benefits of Wind Energy in Australia. Wind Farm Investment and Employment. Wind farms 'have major economic benefit' - The Independent. Onshore wind farms, recently under attack from leading conservationists for damaging the countryside, can bring significant economic benefits locally and nationally, as well as contributing to the fight against climate change, a new study claims. 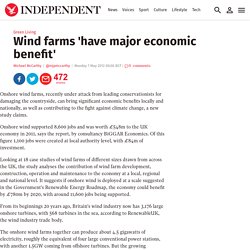 Onshore wind supported 8,600 jobs and was worth £548m to the UK economy in 2011, says the report, by consultancy BiGGAR Economics. Of this figure 1,100 jobs were created at local authority level, with £84m of investment. Looking at 18 case studies of wind farms of different sizes drawn from across the UK, the study analyses the contribution of wind farm development, construction, operation and maintenance to the economy at a local, regional and national level. It suggests if onshore wind is deployed at a scale suggested in the Government's Renewable Energy Roadmap, the economy could benefit by £780m by 2020, with around 11,600 jobs being supported. Weather models at Sea.

Stanford Report, April 2, 2012 Stanford engineers enlist weather models to find the best place on the map for a grid of four wind farms in the ocean off the U.S. 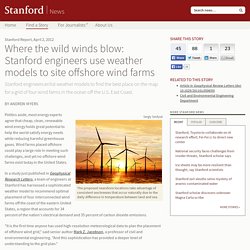 East Coast. By Andrew Myers Sergiy Serdyuk The proposed nearshore locations take advantage of consistent sea breezes that occur naturally due to the daily difference in temperature between land and sea. Politics aside, most energy experts agree that cheap, clean, renewable wind energy holds great potential to help the world satisfy energy needs while reducing harmful greenhouse gases. In a study just published in Geophysical Research Letters, a team of engineers at Stanford has harnessed a sophisticated weather model to recommend optimal placement of four interconnected wind farms off the coast of the eastern United States, a region that accounts for 34 percent of the nation's electrical demand and 35 percent of carbon dioxide emissions. 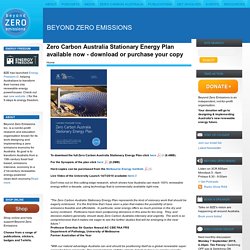 For the Synopsis of the plan click here (2.2MB) Hard copies can be purchased from the Melbourne Energy Institute. Live Video of the University Launch 14/7/2010 available here Don't miss out on this cutting-edge research, which shows how Australia can reach 100% renewable energy within a decade, using technology that is commercially available right now. "The Zero Carbon Australia Stationary Energy Plan represents the kind of visionary work that should be eagerly embraced.

"With our natural advantage Australia can and should be positioning itself as a global renewable super power for future prosperity. “This is an ambitious, technically feasible plan that should be looked at seriously”Tim FlanneryProfessor Faculty of ScienceMacquarie UniversityAustralian of the Year 2007 "To achieve a safe climate future we need an urgent, large-scale transition.

Innovation. Forget about traditional tri-blade wind turbines — the ultra-efficient turbine of the future might look completely different if Kyushu University professor Yuji Ohya has anything to say about it. 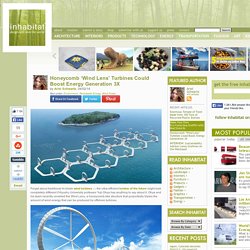 Ohya and his team recently unveiled the Wind Lens, a honeycomb-like structure that purportedly triples the amount of wind energy that can be produced by offshore turbines. The Wind Lens was unveiled at this month’s Yokohama Renewable Energy International Exhibition 2010. The structure works similarly to a magnifying glass that intensifies light from the sun — except in this case, the lens intensifies wind flow. Ohya’s design doesn’t have too many moving parts — just a hoop (AKA a brimmed diffuser) that “magnifies” wind power, and a turbine that is rotated by wind captured from the hoop.

Each Lens, which measures 112 meters in diameter, can provide enough energy for an average household. Ottawa Charter. VIC energy targets.