Minimize Your Exposure. Although exposure to ionizing radiation carries a risk, it is impossible to completely avoid exposure. 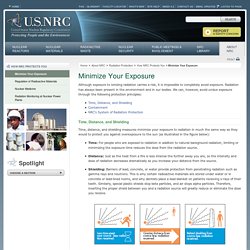 Radiation has always been present in the environment and in our bodies. We can, however, avoid undue exposure through the following protection principles: Time, Distance, and Shielding Time, distance, and shielding measures minimize your exposure to radiation in much the same way as they would to protect you against overexposure to the sun (as illustrated in the figure below): Time: For people who are exposed to radiation in addition to natural background radiation, limiting or minimizing the exposure time reduces the dose from the radiation source. 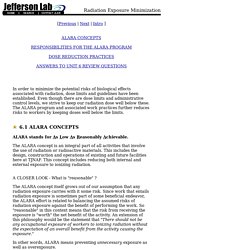 The following are some of the responsibilities of the three groups: Management TJNAF management's responsibilities include: Implementing policies and procedures to maintain radiation exposures ALARA. ARPANSA - Electricity and Health Fact Sheet. Electricity and Health The scientific evidence does not establish that exposure to the electric and magnetic fields found around the home, the office or near powerlines causes health effects. 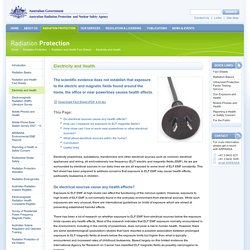 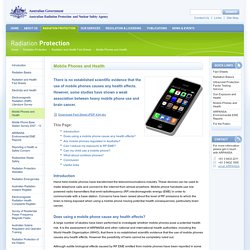 However, some studies have shown a weak association between heavy mobile phone use and brain cancer. Download Fact Sheet (PDF 434 kb) This Page: Introduction Hand held mobile phones have transformed the telecommunications industry. Does using a mobile phone cause any health effects? A large number of studies have been performed to investigate whether mobile phones pose a potential health risk.

Although subtle biological effects caused by RF EME emitted from mobile phones have been reported in some scientific studies, there is no established evidence that these effects lead to adverse health outcomes. Pub1449_web.pdf. Management_of_Radioactive_Waste_in_Australia_v2.pdf. Radioactive waste management in Australia. Top Content. 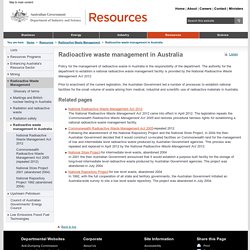 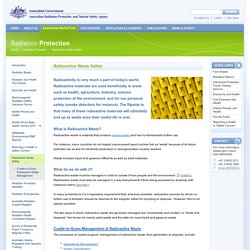 Radioactive materials are used beneficially in areas such as health, agriculture, industry, science, protection of the environment, and for our personal safety (smoke detectors for instance). The flipside is that many of these radioactive materials will ultimately end up as waste once their useful life is over.

Radioactive Waste Management. (Updated August 2015) Nuclear power is the only large-scale energy-producing technology which takes full responsibility for all its wastes and fully costs this into the product.The amount of radioactive wastes is very small relative to wastes produced by fossil fuel electricity generation.Used nuclear fuel may be treated as a resource or simply as a waste.Nuclear wastes are neither particularly hazardous nor hard to manage relative to other toxic industrial wastes.Safe methods for the final disposal of high-level radioactive waste are technically proven; the international consensus is that this should be geological disposal. 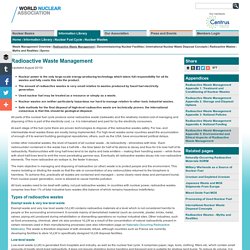 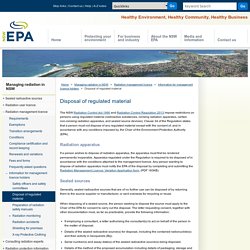 Clause 34 of the Regulation states that a person must not dispose of any regulated material except with the consent of, and in accordance with any conditions imposed by, the Chair of the Environment Protection Authority (EPA). Radiation apparatus If a person wishes to dispose of radiation apparatus, the apparatus must first be rendered permanently inoperable. Radioactive waste repository & store for Australia. Appendix to Australia's Uranium paper (Updated March 2015) Australia has a relatively small amount of low-level radioactive waste and rather less volume of intermediate-level waste (ILW).A national repository for both categories of the Commonwealth's wastes was to be sited in the Northern Territory.The government has called for new sites to be nominated. 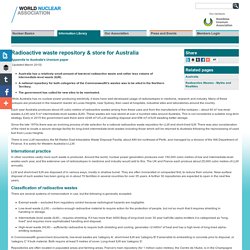 While Australia has no nuclear power producing electricity, it does have well-developed usage of radioisotopes in medicine, research and industry. Many of these isotopes are produced in the research reactor at Lucas Heights, near Sydney, then used at hospitals, industrial sites and laboratories around the country. Radioactive waste disposal procedures : Safety, Health and Wellbeing : The University of Western Australia. The health effects of using solaria and recommendations to enforce solaria regulations in Australia.