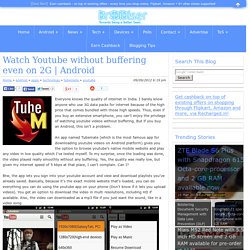 I barely know anyone who use 3G data packs for internet because of the high price that comes bundled with those high speeds. Thus, even if you buy an extensive smartphone, you can't enjoy the privilege of watching youtube videos without buffering. But if you buy an Android, this isn't a problem. An app named Tubemate (which is the most famous app for downloading youtube videos on Android platform) gives you the option to browse youtube's native mobile website and play any video in low quality which I've tested myself. To my surprise, once the loading was done, the video played really smoothly without any buffering. Btw, the app lets you sign into your youtube account and view and download playlists you've already saved. The app is no longer available in the market because it's against Youtube's terms to download their videos. 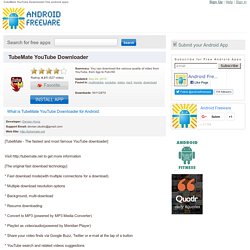 Because downloading always happens in the background, you can go on watching YouTube, surfing the Internet, tweeting, and listening to your music as you download. AirDroid - Android on Computer. Pro tip: Migrate all of your Android contacts to Google. Five apps that leave Google Contacts Manager in the dust. Google's contact management tool is pretty lame, especially for business users. 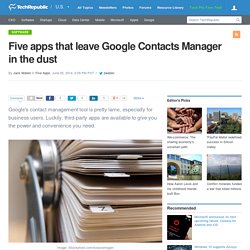 Luckily, third-party apps are available to give you the power and convenience you need. If you're a heavy user of Google Apps, you know that the Google Contacts Manager isn't the greatest tool in an otherwise outstanding toolbox. In fact, the contact manager trapped within Google Docs is so bad, I use it only as a Gmail address book. How this has been overlooked for so long escapes me -- considering how the business landscape lives and dies by its contacts. Five of the best voice recording apps available for Android. When it comes to voice recording tools for the Android platform, you have some excellent choices. 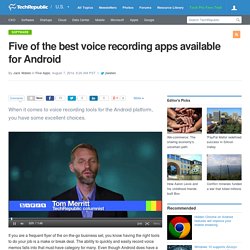 If you are a frequent flyer of the on-the-go business set, you know having the right tools to do your job is a make or break deal. The ability to quickly and easily record voice memos falls into that must-have category for many. Even though Android does have a built-in voice recorder, it's not always the best tool for the job. Troubleshoot Wi-Fi connections on your Android phone. Wi-Fi connections can make using an Android phone a more robust experience. 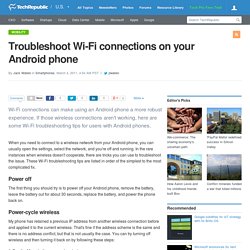 If those wireless connections aren't working, here are some Wi-Fi troubleshooting tips for users with Android phones. When you need to connect to a wireless network from your Android phone, you can usually open the settings, select the network, and you're off and running. In the rare instances when wireless doesn't cooperate, there are tricks you can use to troubleshoot the issue. These Wi-Fi troubleshooting tips are listed in order of the simplest to the most complicated fix. Power off The first thing you should try is to power off your Android phone, remove the battery, leave the battery out for about 30 seconds, replace the battery, and power the phone back on. How to remove bloatware from your rooted Android device. If you have a rooted Android device and are looking for the best way to remove bloatware, Jack Wallen has the answer. 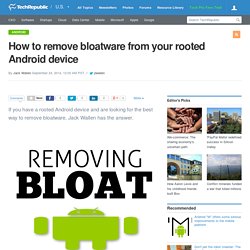 So, you've opted to root your Android device to enjoy new features and get rid of the bloatware installed by your carrier and the device manufacturer. You root the phone, only to find you still can't uninstall those apps! Even with the rooted device, the Uninstall button never appears on the carrier-installed applications. What do you do? There are two options. This app is called NoBloat Free and makes short shrift of removing those unwanted apps from your device. 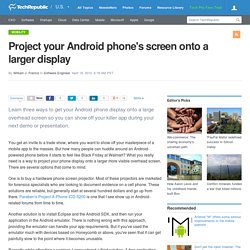 You get an invite to a trade show, where you want to show off your masterpiece of a mobile app to the masses. But how many people can huddle around an Android-powered phone before it starts to feel like Black Friday at Walmart? What you really need is a way to project your phone display onto a larger more visible overhead screen. There are several options that come to mind. One is to buy a hardware phone screen projector. Another solution is to install Eclipse and the Android SDK, and then run your application in the Android emulator. Recently while attending a seminar, I encountered a third solution. Droid@Screen I downloaded Droid@Screen and tried it on my Mac.

Project your Android phone's screen onto a larger display. Edit your rooted Android hosts file to block ad servers. If you've done enough with networking, you probably know about the tried-and-true hosts file. 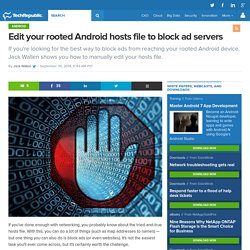 With this, you can do a lot of things (such as map addresses to names) — but one thing you can also do is block ads (or even websites). It's not the easiest task you'll ever come across, but it's certainly worth the challenge. But why block ads? In a perfect world, that wouldn't be necessary. Unfortunately, we don't live in a perfect world, and there are advertising networks out there that have nefarious intentions.

The one caveat to this is that the device must be rooted (because you need root access to edit or overwrite the hosts file). Once you have the device rooted, the task becomes easy. Figure A Viewing the hosts file on a rooted Verizon-branded Samsung Galaxy S4. Five remote access tools for Android. 10 ways to get the most bang for your buck with an Android device. Whether you're new to Android or just looking for ways to optimize convenience and performance, these tips will enhance your mobile experience. 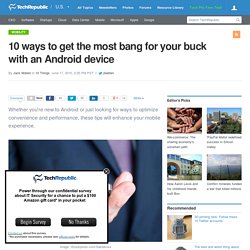 Maybe you just purchased your first Android device--or perhaps you've had it for a while but you suspect you aren't getting the most out of it. Either way, you're in luck: There is so much available in the way of tweaks, apps, options, and configurations that can make your device more powerful and useful. Here are 10 of my favorite tips to help you get the maximum benefit from the Android platform. 10 common misconceptions about mobile device batteries. Have you run into a few old-school users with antiquated ideas about how to treat smartphone batteries? 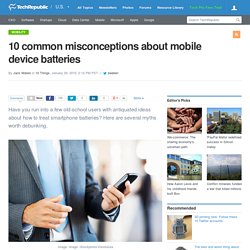