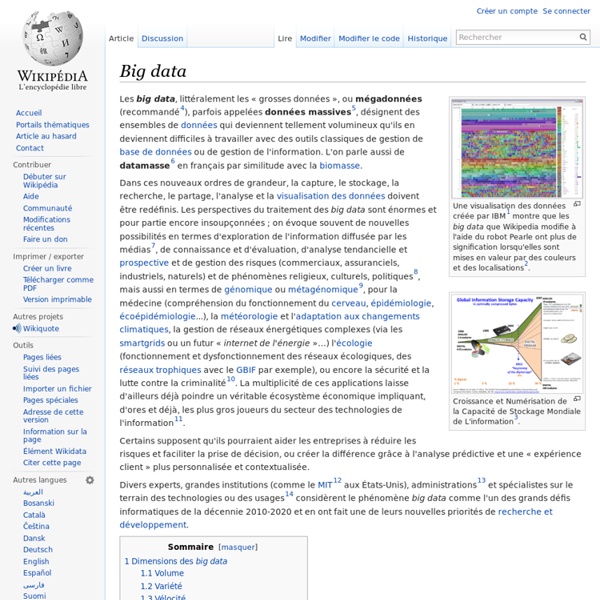 Company - Report - Big data: The next frontier for innovation, competition, and productivity - May 2011 The amount of data in our world has been exploding, and analyzing large data sets—so-called big data—will become a key basis of competition, underpinning new waves of productivity growth, innovation, and consumer surplus, according to research by MGI and McKinsey's Business Technology Office. Leaders in every sector will have to grapple with the implications of big data, not just a few data-oriented managers. The increasing volume and detail of information captured by enterprises, the rise of multimedia, social media, and the Internet of Things will fuel exponential growth in data for the foreseeable future. MGI studied big data in five domains—healthcare in the United States, the public sector in Europe, retail in the United States, and manufacturing and personal-location data globally. Big data can generate value in each. For example, a retailer using big data to the full could increase its operating margin by more than 60 percent.

Getting started with WebGL - WebGL WebGL enables web content to use an API based on OpenGL ES 2.0 to perform 3D rendering in an HTML canvas in browsers that support it without the use of plug-ins. WebGL programs consist of control code written in JavaScript and special effects code(shader code) that is executed on a computer's Graphics Processing Unit (GPU). WebGL elements can be mixed with other HTML elements and composited with other parts of the page or page background. This article will introduce you to the basics of using WebGL. It's assumed that you already have an understanding of the mathematics involved in 3D graphics, and this article doesn't pretend to try to teach you OpenGL itself. The code examples in this tutorial can also be found in the webgl-examples GitHub repository.

home: Strata New York 2011 - O'Reilly Conferences, September 22 - 23, 2011, New York, NY Find out more about Strata 2012, happening February 28 - March 1 in Santa Clara, California. If you weren't able to attend, you can still get a taste of Strata New York with the Strata Conference New York 2011: Complete Video Compilation . At our first Strata Conference in February, forward-thinking developers, analysts, researchers, and entrepreneurs realized that they were converging on a new profession—data scientist. Since then, demand has skyrocketed for data scientists who are proficient in the fast-moving constellation of technologies for gleaning insight and utility from big data. "A significant constraint on realizing value from big data will be a shortage of talent, particularly of people with deep expertise in statistic and machine learning, and the manager and analysts who know how to operate companies by using insights from big data." —McKinsey Global Institute report, "Big Data: The next frontier for innovation, competition, and productivity," May, 2011

How Far is the Reach of WebGL on the Desktop - Renaun Erickson WebGL WebGL is definitely making some great in-roads into desktop browsers. There are a lot of other HTML5 features that round out WebGL for games, for example check out some AAA web demos here. In talking to people there seems to be some confusion about what is the real reach vs all the hype. Big Data, Big Noise, Big Trouble? I have been hearing the term “big data” a lot lately (should it be capitalized?) and may even have talked about it inadvertently in my latest blog (“What Lurks in your Unstructured Data?”). But, I am not sure what it is. Can one byte be bigger than another? Open Standards for Real-Time 3D Communication The German 3D software developer Bitmanagement Software GmbH who are in the board of directors of the Web3D Consortium in Mountain View, California, USA has released the new authoring tool "BS Content Studio", which enables a wide audience to create interactive and Internet ready 3D content. This tool will sustainable accelerate and simplify the work-flow and time necessary to compose, animate and optimize 3D models and interactive content for the web and standalone applications. Even "non 3D specialists” can be now in the position to generate 3D real-time applications easily. The "BS Content Studio" Tool addresses a horizontal market and has been developed around the Web3D ISO standard X3D with the goal to enable a broad range of application domains including CAD, GIS, games, process automation, 3D printing, virtual catalogs, 3D marketing banners, configurators, product visualization, automation, augmented reality, stereo TV content, social communication and many more.

Seizing the potential of ‘big data’ - McKinsey Quarterly - Strategy - Strategy in Practice Large-scale data gathering and analytics are quickly becoming a new frontier of competitive differentiation. While the moves of companies such as Amazon.com, Google, and Netflix grab the headlines in this space, other companies are quietly making progress. In fact, companies in industries ranging from pharmaceuticals to retailing to telecommunications to insurance have begun moving forward with big data strategies in recent months. Together, the activities of those companies illustrate novel strategic approaches to big data and shed light on the challenges CEOs and other senior executives face as they work to shatter the organizational inertia that can prevent big data initiatives from taking root. From these experiences, we have distilled four principles that we hope will help CEOs and other corporate leaders as they try to seize the potential of big data.

HTML5 Website Showcase: 48 Potential Flash-Killing Demos So you’ve heard all rumors about HTML5 would take over Adobe Flash. While most web community argues that it’s possible or not, you must be wandering what makes HTML5 so powerful that even giant company Apple wants to use it to replace Flash. That’s why this post exists, we’re not going to talk about what HTML5 can do, but show live demos of magical things that HTML5 can achieve with other language like JavaScript, so get ready to be inspired. Note: As HTML5 is not fully supported by certain web browser like Internet Explorer, you’re strongly recommended to use Firefox browser to view all HTML5 demos below.