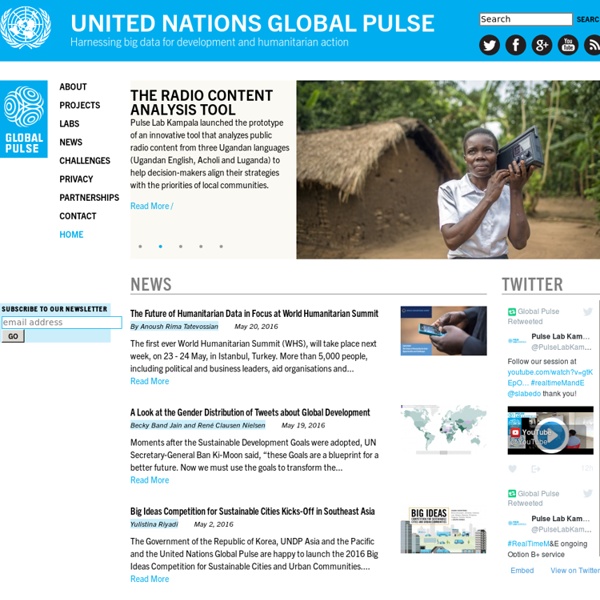 Hunchworks - UN Global Pulse HunchWorks is the world's first social network for hypothesis formation, evidence collection, and collective decision-making. HunchWorks is based on the recognition that all too often, by the time we have hard evidence of what is happening, it's too late to act. Yet after a crisis, experts inevitably point to fragmentary evidence that was available early on but was so inconclusive at the time that no one was willing to sound the alarm publicly. HunchWorks allows researchers to connect with other experts with complementary resources so that together they could quickly determine if data signals—those fragmentary bits of evidence—are indications of deepening crisis and warrant further investigation. Why HunchWorks Works Using HunchWorks, a researcher who noticed an anomaly in data that she suspects is related to impending crises would quietly compose a hunch outlining her concerns. HunchWorks essentially allows the researcher to gather evidence, analyze data and be peer reviewed—all at once.

Human Footprint Interactive Geographers study the Earth and its physical features, inhabitants, and cultural phenomenon. They examine the physical and human characteristics of a region, ranging in scale from local to global, to explain an event or solve a problem. While many geographers have at least a bachelor’s degree in geography, many professionals, such as teachers, traffic consultants, and doctors, must also use geography in their jobs when examining specific challenges and solutions to issues. This geo-story introduces you to some of these folks who use geography.

The Global Innovation Index 2013 - The Local Dynamics of Innovation The Global Innovation Index 2014 (GII), in its 7th edition this year, is co-published by Cornell University,INSEAD, and the World Intellectual Property Organization(WIPO, an agency of the United Nations, UN). The core of the GII Report consists of a ranking of world economies’ innovation capabilities and results. In 2013, the ranking covered 142 economies, accounting for 94.9% of the world’s population and 98.7% of the world’s Gross Domestic Product (in US dollars). The GII has established itself as the reference among innovation indices, and has evolved into a valuable benchmarking tool to facilitate public-private dialogue, whereby policymakers, business leaders and other stakeholders can evaluate progress on a continual basis.

Pixelache Festival 2017 | OUR TOOL FOR INTERCONNECTIVITY DURING THE Interview with Olivier Auber, the inventor of Poietic Generator, the game will be installed at our festival premises thoughout the whole festival. The main session will be day 23.9 from 20:30 to 22:00 at Oranssi building. What led you to come up with Poietic Generator (PG) in the first place? What were you trying to discover or achieve? Since I am a science fiction fan, I wondered for a long time about the promises of science and the extrapolation of technologies. I find the PG to be a simple yet profound prototype of a participative system. Everyone knows that there is an extensive loss of meaning, purpose and guideline on planet Earth for the moment. (i) Search For Terrestrial Intelligence Without verbal communication, the PG achieves a lot. I don't see the PG as an isolated non-human system. After all these years there must have been plenty of new insights into the nature of collaboration and participation via the PG.

Google Fights to Save 3,054 Languages Will you be any worse off the moment humans cease to speak in Aragonese? How about Navajo or Ojibwa? Or Koro, a language only just discovered in a tiny corner of northeast India? No, you probably wouldn't, not in that moment. But humanity would be. If there is hope, it lies in the world's centers of information — such as Google. The site, launched early Thursday, features videos and an interactive map. You can hear the heartbreaking, beautiful sound of Koro being sung, or read 18th century manuscripts written in a nearly-dead Native American tongue. The idea is to unite a lot of smaller preservation efforts under the Google.org banner. Check out the project's video below, and let us know in the comments: how else can 21st century technology help save ancient languages?

Vanishing Cultures Photography PriceStats ® Aiko Stevenson: A 4 Degrees Celsius Rise? World leaders will gather in Doha this week to discuss the fate of our planet whose future now hangs in the balance. According to the World Bank, global temperatures may rise by 4 degrees Celsius as early as 2060. This will usher in changes not seen since the last Ice Age. "It is my hope that this report shocks us into action. It is a stark reminder that climate change affects everything. According to the World Bank, extreme weather will thus become the "new normal." In this much hotter world, sea levels will rise by at least three feet. This stark warning by the World Bank is one of many that has been issued by a global body in recent weeks. So, as world leaders gather in Doha this week, they may have to go much further than simply extending and ratifying the Kyoto Protocol which was established in 1997 to curb global carbon dioxide emissions. According to the IEA, both measures are desperately needed in order to stave off the worst effects of global warming.