How stories can transform a classroom 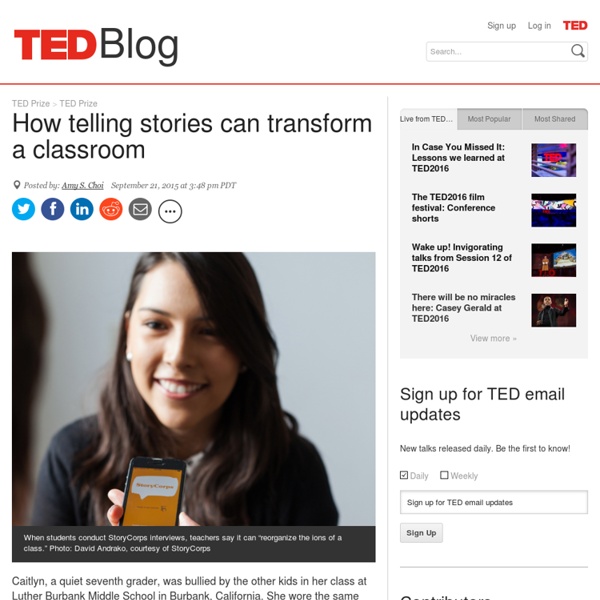 When students conduct StoryCorps interviews, teachers say it can “reorganize the ions of a class.” Photo: David Andrako, courtesy of StoryCorps Caitlyn, a quiet seventh grader, was bullied by the other kids in her class at Luther Burbank Middle School in Burbank, California. She wore the same cowboy boots every day. “The other kids were awful about it,” said English teacher Rebecca Mieliwocki, remembering this student who has stayed lodged in her memory for 10 years now. “Even the best kids can be horrible sometimes. The law of the jungle, however, can change. When Caitlyn was in her class a decade ago, Mieliwocki introduced StoryCorps to her students. Caitlyn had interviewed her mom. “None of us knew any of this about her,” said Mieliwocki. The teasing stopped. “Telling our stories brought all of our lived realities into the classroom,” said Mieliwocki. StoryCorpsU launched in 2009 to echo that emotional transformation. Interviews are a powerful tool for increasing understanding.

Character(s) in History - A Biographical Investigation (Grades 6-8) Character(s) in History – A Biographical Investigation Brentwood Middle School Overview This lesson enhances a common lesson about biographies and autobiographies by infusing it with connections to character education through the key elements of a newspaper. Students will select a famous historical figure (Ben Franklin, George Washington, etc.) or more modern-day figure (Barack Obama, Martin Luther King Jr.) and research the lives of those individuals. Lesson Objectives Materials Needed Teacher-selected biographical and autobiographical works. Procedures Teacher should present the class with an excerpt from a biography. Assessment Each segment of the assignment can be graded individually. Students with learning disabilities can have modified assignments that may shorten the amount of information needed or have pre-selected individuals to research.

Quotes (Age 18+) A Map Of How Emotions Influence Our Lives, Commissioned By The Dalai Lama The five circles slowly pulsing on my screen are meant to visualize the entire core of human emotion. Fear. Disgust. Anger. Reductive? "The Dalai Lama and I have had a series of dialogues—we’re up to about 60 hours of one-on-one conversations—and in one of them, he said to me, ‘When we wanted to get to the new world, we need[ed] a map to get there. Ekman is a prominent psychologist whose studies on universal human expressions—the smiles and scowls we share across cultures—became foundational for the modern era of emotion research. The results became those five "continents" you see on the site today: fear, disgust, anger, sadness, and enjoyment. But they aren't purely empirical. In the atlas, the emotions are clinically detached from the viewer. As soon as you load the site, you'll see that the five core emotions seem to ebb and flow with a certain randomness, like planets that may or may not be influencing one another with their gravitational pull.

(Dis)Honesty: The Truth About Lies Interweaving groundbreaking experiments from celebrated behavioral economist Dan Ariely with personal stories from individuals affected by the unraveling of their lies, Ariely and a team of scientists uncover our propensity to be dishonest—sometimes even unknowingly. What’s revealed is a fascinating look at the forces behind our collective behavior and the many truths behind lies. Institutional & Public Viewing Edition Includes: - An unlimited public performance license for a single campus or location - Feature film & One hour version (both on a single DVD) - Comprehensive Discussion Guide (designed for High School audiences, but contains valuable information for all ages). See a sample of the Discussion Guide here - Screening Kit (poster artwork, supplemental images, press kit, etc) Quotes “Brilliant” – Psychology Today "Illuminating" - New York Times “A deep-think doc animated by the researcher at its center” – The Hollywood Reporter “Intriguing” - Esquire “Tells it like it is.

Words Hurt! (Grades 6-8) Words Hurt! Brentwood Middle School Overview We noticed an increase in students with hurt feelings because of other students’ comments. Many comments were meant to be “funny,” not necessarily with the intent of hurting someone else. Lesson Objectives Students will see different people's points of view about hurtful words. Materials Needed Words Hurt Survey Copies Index cards Folders containing: •Pencil for each student in group •Evaluation survey for each student in each group •1 piece of loose-leaf paper •Index card with hurtful words for each student in group •Direction sheet for group leaders Procedures Break students into groups of 5-7 people. Assessment As student diversity leaders run the small groups throughout the room, teachers circulate to provide support and to assess through observation how the activity to flowing. It is important that teachers monitor the groupings of students. Brentwood Middle School Student Diversity Leadership Group, Faculty Facilitators: Ms.

Global Scribes Mr. Tweed’s Good Deeds: An Unusual Counting Book about the Power of Small Kindnesses by Maria Popova “A library is no place for three lost mice.” However anguishing the art of asking for help may be, little is more gladdening than the act of giving it. That’s the premise behind Mr. Tweed’s Good Deeds (public library) — a most unusual and gorgeously illustrated counting book by Jim Stoten, using Mr. Tweed’s small acts of kindness to teach kids the numbers and sneak in a subtle lesson on the power of grace. On his daily walk into town, Mr. Little Colin Rocodile is missing his one kite and Mrs. Mr. After a long day of small kindnesses for his friends and neighbors, Mr. Mr. For sending young ones off into a different stage of life with the same message, see George Saunders’s fantastic commencement address on the power of kindness. Donating = Loving Bringing you (ad-free) Brain Pickings takes hundreds of hours each month. You can also become a one-time patron with a single donation in any amount. Brain Pickings has a free weekly newsletter. Share on Tumblr

Great Invisible On April 20, 2010, the Deepwater Horizon oil rig exploded in the Gulf of Mexico. It killed 11 workers and caused the worst oil spill in American history. The explosion still haunts the lives of those most intimately affected, though the story has long ago faded from the front page. At once a fascinating corporate thriller, a heartbreaking human … >more At once a fascinating corporate thriller, a heartbreaking human drama and a peek inside the walls of the secretive oil industry, THE GREAT INVISIBLE is the first documentary feature to go beyond the media coverage to examine the crisis in depth through the eyes of oil executives, survivors and Gulf Coast residents who experienced it first-hand and then were left to pick up the pieces while the world moved on. >less