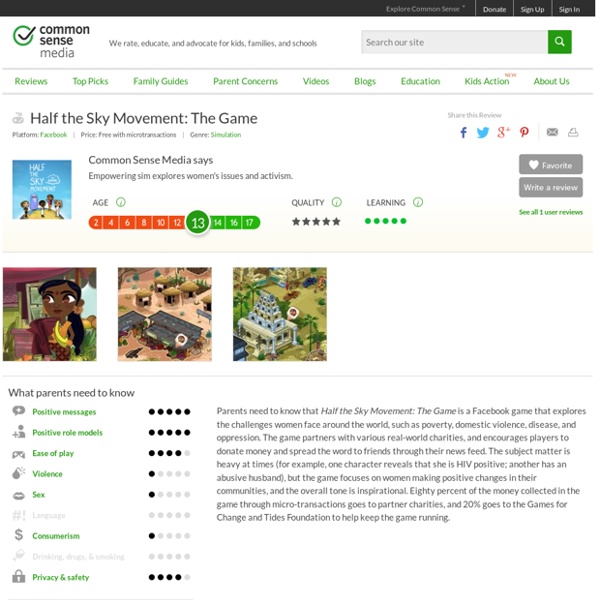 Google Maps (10+) Google Maps is an excellent tool for active people who like to get around. Navigation provides well-highlighted alternate routes, optional text-list display with voice guidance, street level views with rotation, a peg man to drag around, and easy zoom controls. Users can ask for directions for driving, walking, biking, or riding the bus. Map layers include traffic, transit lines, bicycling routes, Wikipedia articles, attractions, restaurants, and satellite view (toggle for map view). Terrain layer shows contour. Promises A beautiful and deeply moving portrait of seven Palestinian and Israeli children. Emmy award-winning and Academy award-nominated, PROMISES follows the journey of a filmmaker who meets these children in and around Jerusalem, from a Palestinian refugee camp to an Israeli settlement in the West Bank. Although they live only 20 minutes apart, these children exist in completely separate worlds, divided by physical, historical and emotional boundaries. PROMISES explores the nature of these boundaries and tells the story of a few children who dared to cross the lines to meet their neighbors. The children of PROMISES offer refreshing, personal and sometimes humorous insight into the Palestinian-Israeli conflict. With remarkable balance and a compelling blend of pathos and humor, this Oscar-nominated, Emmy Award winning film moves the conflict out of politics and into the realm of the human.

A Small Act When Hilde Back sponsored a young, rural Kenyan student, she thought nothing of it. She certainly never expected to hear from him, but years later, she does. Now a Harvard graduate and a Human Rights Lawyer for the United Nations, Chris Mburu decides to find the stranger that changed his life. Moses: When Harriet Tubman Led Her People to Freedom (Age 5+) Two things set this story of Harriet Tubman apart from the many others on the market. The first is the focus of the text. Rather than a simple retelling of the known events of her life, this is instead a somewhat fictionalized account of Tubman's spiritual journey. As told in the swirling, lyrical writing, filled with rhythm and internal rhyme, these are her conversations with God, whose voice she hears in the breeze and the songs of birds, whose face she sees reflected in moonlight on swamp water. The book consists primarily of these conversations, before, during, and after her flight, laid out in clever typography that enhances the meaning.

Paper Clips (Age 8+) This documentary isn't a slick, celebrity-narrated account of the Whitwell students' simple but life-changing Holocaust studies project. In fact, the biggest celebrity is Happy Days dad Tom Bosley, who, as a Jewish grandfather, sent in one paper clip to the class. Instead, the documentary earnestly focuses on the principal Linda Hooper, assistant principal David Smith, and language-arts teacher Sandra Roberts, and the students and journalists who helped spread the word that a group of white Southern kids were doing their best to honor the six million Jewish people killed by Hitler's racist regime. Throughout the collection process, the students, who didn't even know any Jews personally when they began the project, become attuned to the stories behind the paper clips and understand that unchecked intolerance and prejudice can lead to genocide.

One Lucky Elephant Ultimately, David must face the difficult truth that the circus is no place for Flora. She needs to be with other elephants. The road to Flora's retirement, however, is a difficult and emotional journey that tests their bond in unexpected ways. Ten years in the making, One Lucky Elephant explores the consequences of keeping wild animals in captivity, while never losing sight of the delicate love story at its heart. Official Selection, Oprah Winfrey Network Documentary Film Club Books That Teach Empathy (List) Jump to navigation "Best of" Lists "Best of" lists Get age-appropriate ideas and inspiration for every interest:

Pray the Devil Back to Hell This powerful documentary film has been screened at: · World Economic Forum· United Nations· U.S. Department of State· Ministry of Foreign Affairs at the Hague Quotes "UPLIFTING, DISHEARTENING, INSPIRING, ENRAGING"—The New York Times "MARVELOUS"—The Los Angeles Times Multicultural Books close(x) Don’t Miss Out You’re all set! Look out for our weekly updates soon. A Place At The Table Directors Kristi Jacobson and Lori Silverbush examine the issue of hunger in America through the lens of three people struggling with food insecurity: Barbie, a single Philadelphia mother who grew up in poverty and is trying to provide a better life for her two kids; Rosie, a Colorado fifth-grader who often has to depend on friends and neighbors to feed her and has trouble concentrating in school; and Tremonica, a Mississippi second-grader whose asthma and health issues are exacerbated by the largely empty calories her hardworking mother can afford. Ultimately, A PLACE AT THE TABLE shows us how hunger poses serious economic, social and cultural implications for our nation, and that it could be solved once and for all, if the American public decides — as they have in the past — that making healthy food available and affordable is in the best interest of us all. "BEAUTIFULLY SHOT AND EDITED. THE CRAFT IS OF A VERY HIGH LEVEL" — Toronto HotDocs Film Festival Must See

La Source In La Source (pronounced lah-soos), Haiti water does not come easily. Each day, villagers of this small, rural community must choose between enduring a long, treacherous walk to retrieve clean water or drink contaminated water from a nearby river. For over 30 years, the villagers have attempted to address this problem by constructing a means of channeling the water from a natural spring in the mountains, but with limited funding and an unsupportive government their attempts to provide clean water were to no avail. Since he was a teenager, Josue Lajeunesse, along with his brother Chrismedonne have dreamt of remedying this problem for their people. In 1989, Josue moved from La Source to New Jersey where he found employment as a custodian at Princeton University.