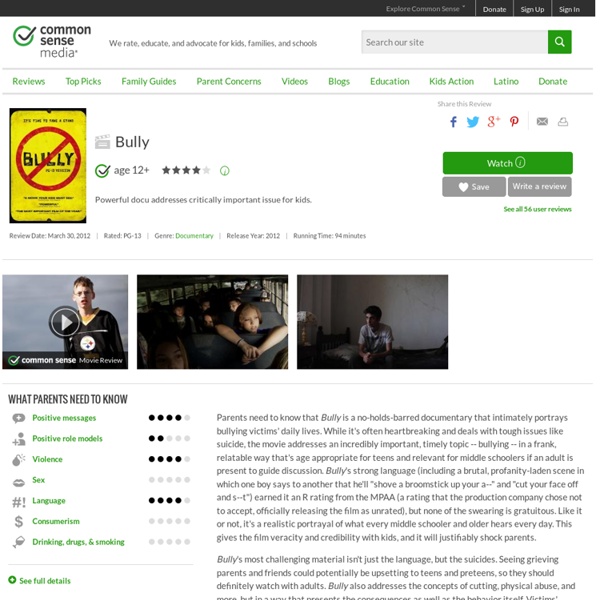 Paper Clips (Age 8+) This documentary isn't a slick, celebrity-narrated account of the Whitwell students' simple but life-changing Holocaust studies project. In fact, the biggest celebrity is Happy Days dad Tom Bosley, who, as a Jewish grandfather, sent in one paper clip to the class. Instead, the documentary earnestly focuses on the principal Linda Hooper, assistant principal David Smith, and language-arts teacher Sandra Roberts, and the students and journalists who helped spread the word that a group of white Southern kids were doing their best to honor the six million Jewish people killed by Hitler's racist regime.

Promises A beautiful and deeply moving portrait of seven Palestinian and Israeli children. Emmy award-winning and Academy award-nominated, PROMISES follows the journey of a filmmaker who meets these children in and around Jerusalem, from a Palestinian refugee camp to an Israeli settlement in the West Bank. Although they live only 20 minutes apart, these children exist in completely separate worlds, divided by physical, historical and emotional boundaries. PROMISES explores the nature of these boundaries and tells the story of a few children who dared to cross the lines to meet their neighbors. The children of PROMISES offer refreshing, personal and sometimes humorous insight into the Palestinian-Israeli conflict. American Promise The American Promise journey began in 1999, when filmmakers Joe Brewster and Michèle Stephenson enrolled their son Idris in the Dalton School on the Upper East Side of Manhattan after the private institution boldly strengthened its commitment to cultivating a diverse student body. Michèle and Joe decided to turn the camera on themselves to film the experiences of 5-year-old Idris and his best friend and classmate Seun. The documentary captures the stories of Idris, Seun, and their families from the first day of kindergarten all the way to their 2012 high school graduation. Over the 12 years, we see the boys and their families struggle with stereotypes and identity, navigate learning differences that later become diagnoses, and ultimately take increasingly divergent paths on their road to graduation. Quotes "...DAZZLING...an engrossing portrait of modern parenting." - Washington Post

Multicultural Books close(x) Don’t Miss Out You’re all set! One Lucky Elephant Ultimately, David must face the difficult truth that the circus is no place for Flora. She needs to be with other elephants. The road to Flora's retirement, however, is a difficult and emotional journey that tests their bond in unexpected ways. Ten years in the making, One Lucky Elephant explores the consequences of keeping wild animals in captivity, while never losing sight of the delicate love story at its heart. TV and Movies That Promote Empathy Get our best picks for movies, apps, TV shows, books, and more, customized for your kids. Get the App Get the App

Movies That Inspire Kids to Change the World close(x) Don’t Miss Out You’re all set! Look out for our weekly updates soon. Connect with us Jump to navigation A Place At The Table Directors Kristi Jacobson and Lori Silverbush examine the issue of hunger in America through the lens of three people struggling with food insecurity: Barbie, a single Philadelphia mother who grew up in poverty and is trying to provide a better life for her two kids; Rosie, a Colorado fifth-grader who often has to depend on friends and neighbors to feed her and has trouble concentrating in school; and Tremonica, a Mississippi second-grader whose asthma and health issues are exacerbated by the largely empty calories her hardworking mother can afford. Ultimately, A PLACE AT THE TABLE shows us how hunger poses serious economic, social and cultural implications for our nation, and that it could be solved once and for all, if the American public decides — as they have in the past — that making healthy food available and affordable is in the best interest of us all. "BEAUTIFULLY SHOT AND EDITED. THE CRAFT IS OF A VERY HIGH LEVEL" — Toronto HotDocs Film Festival Must See

Building Social and Emotional Skills in Elementary Students: The Power of Perspective In this nine-part series, we will look at important factors that influence the happiness and social and emotional learning of elementary school age children. These are very useful in helping students learn, manage emotions better and increase empathy. Each blog features one letter of the acronym HAPPINESS: H = Happiness A = Appreciation P = Passions and Strengths P = Perspective I = Inner Meanie/Inner Friend N = Ninja Mastery E = Empathy S = So Similar S = Share Your Gifts In this post, we’ll explore perspective. How we frame the circumstances in our life has a great deal to do with the happiness we derive from them. Cultural Appreciation Apps, Games, and Websites No thanks close(x) Don’t Miss Out La Source In La Source (pronounced lah-soos), Haiti water does not come easily. Each day, villagers of this small, rural community must choose between enduring a long, treacherous walk to retrieve clean water or drink contaminated water from a nearby river. For over 30 years, the villagers have attempted to address this problem by constructing a means of channeling the water from a natural spring in the mountains, but with limited funding and an unsupportive government their attempts to provide clean water were to no avail. Since he was a teenager, Josue Lajeunesse, along with his brother Chrismedonne have dreamt of remedying this problem for their people.