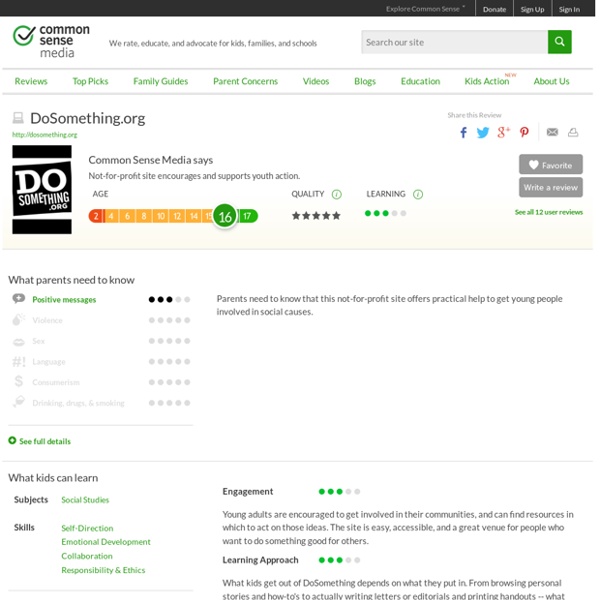 Paper Clips (Age 8+) This documentary isn't a slick, celebrity-narrated account of the Whitwell students' simple but life-changing Holocaust studies project. In fact, the biggest celebrity is Happy Days dad Tom Bosley, who, as a Jewish grandfather, sent in one paper clip to the class. Instead, the documentary earnestly focuses on the principal Linda Hooper, assistant principal David Smith, and language-arts teacher Sandra Roberts, and the students and journalists who helped spread the word that a group of white Southern kids were doing their best to honor the six million Jewish people killed by Hitler's racist regime. Throughout the collection process, the students, who didn't even know any Jews personally when they began the project, become attuned to the stories behind the paper clips and understand that unchecked intolerance and prejudice can lead to genocide.

Promises A beautiful and deeply moving portrait of seven Palestinian and Israeli children. Emmy award-winning and Academy award-nominated, PROMISES follows the journey of a filmmaker who meets these children in and around Jerusalem, from a Palestinian refugee camp to an Israeli settlement in the West Bank. Although they live only 20 minutes apart, these children exist in completely separate worlds, divided by physical, historical and emotional boundaries. The World Before Her The Miss India pageant is the ultimate glamour event in a country that has gone mad for beauty contests. Winning the coveted title means instant stardom, a lucrative career path and, for some girls, freedom from the constraints of a patriarchal society. Through dramatic verite action and unprecedented behind-the-scenes access, The World Before Her sweeps back the curtain to reveal the intimate stories of twenty young women determined to win the crown. As the beauty contestants move through beauty boot camp, Director Nicha Pahuja travels to another corner of India to visit a different camp for young girls, the women's wing of the militant fundamentalist movement. Through lectures and physical combat training, these girls learn what it means to be good Hindu women and how to fight against Islam, Christianity and the onslaught of Western culture.

Sam Harris on Spirituality without Religion, Happiness, and How to Cultivate the Art of Presence by Maria Popova “Our world is dangerously riven by religious doctrines that all educated people should condemn, and yet there is more to understanding the human condition than science and secular culture generally admit.” Nietzsche’s famous proclamation that “God is dead” is among modern history’s most oft-cited aphorisms, and yet as is often the case with its ilk, such quotations often miss the broader context in a way that bespeaks the lazy reductionism with which we tend to approach questions of spirituality today. Nietzsche himself clarified the full dimension of his statement six years later, in a passage from The Twilight of Idols, where he explained that “God” simply signified the supersensory realm, or “true world,” and wrote: “We have abolished the true world.

The Human Face of Big Data Big Data is defined as the real time collection, analyses, and visualization of vast amounts of information. In the hands of Data Scientists this raw information is fueling a revolution which many people believe may have as big an impact on humanity going forward as the Internet has over the past two decades. Its enabling us to sense, measure, and understand aspects of our existence in ways never before possible. The Human Face of Big Data captures an extraordinary revolution sweeping, almost invisibly, through business, academia, government, healthcare, and everyday life. AWAKE: The Life of Yogananda Synopsis AWAKE: The Life of Yogananda is an unconventional biography about the Hindu Swami who brought yoga and meditation to the West in the 1920s. Paramahansa Yogananda authored the spiritual classic “Autobiography of a Yogi,” which has sold millions of copies worldwide and is a go-to book for seekers, philosophers and yoga enthusiasts today. (Apparently, it was the only book that Steve Jobs had on his iPad.)

Cultural Appreciation Apps, Games, and Websites No thanks close(x) Don’t Miss Out You’re all set! Look out for our weekly updates soon. Global Awareness Apps, Games, and Websites Get our best picks for movies, apps, TV shows, books, and more, customized for your kids. Get the App Get the App No thanks A Place At The Table Directors Kristi Jacobson and Lori Silverbush examine the issue of hunger in America through the lens of three people struggling with food insecurity: Barbie, a single Philadelphia mother who grew up in poverty and is trying to provide a better life for her two kids; Rosie, a Colorado fifth-grader who often has to depend on friends and neighbors to feed her and has trouble concentrating in school; and Tremonica, a Mississippi second-grader whose asthma and health issues are exacerbated by the largely empty calories her hardworking mother can afford. Ultimately, A PLACE AT THE TABLE shows us how hunger poses serious economic, social and cultural implications for our nation, and that it could be solved once and for all, if the American public decides — as they have in the past — that making healthy food available and affordable is in the best interest of us all. "BEAUTIFULLY SHOT AND EDITED.

Connected From founding The Webby Awards to being a passionate advocate for The National Day of Unplugging, Her love/hate relationship with technology serves as the springboard for a thrilling exploration of modern life…and our interconnected future. Equal parts documentary and memoir, the film unfolds during a year in which technology and science literally become a matter of life and death for the director. As Shlain’s father battles brain cancer and she confronts a high-risk pregnancy, her very understanding of connection is challenged.