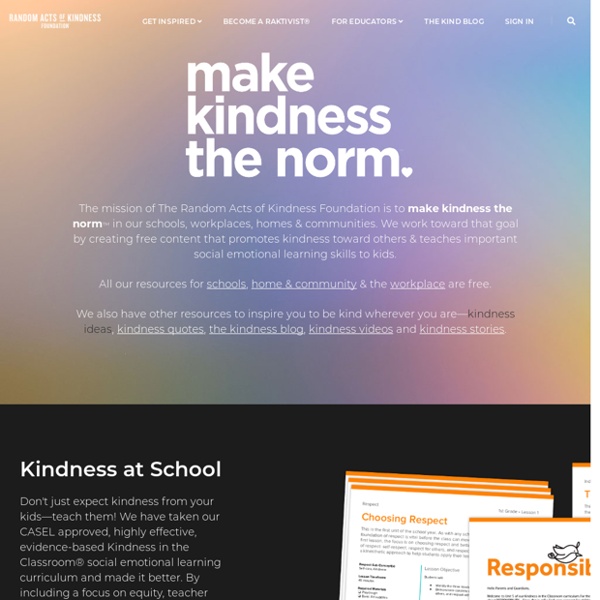 Fairy tale - Wikipedia For a comparison of fairy tale with other kinds of stories, such as myths, legends and fable, see Traditional story. Fairy tales are found in oral and in literary form; the name "fairy tale" was first ascribed to them by Madame d'Aulnoy in the late 17th century. Many of today's fairy tales have evolved from centuries-old stories that have appeared, with variations, in multiple cultures around the world.[4] The history of the fairy tale is particularly difficult to trace because only the literary forms can survive. Still, according to researchers at universities in Durham and Lisbon, such stories may date back thousands of years, some to the Bronze Age more than 6,000 years ago.[5] Fairy tales, and works derived from fairy tales, are still written today. Folklorists have classified fairy tales in various ways.

Forget Survival of the Fittest: It Is Kindness That Counts Why do people do good things? Is kindness hard-wired into the brain, or does this tendency arise via experience? Or is goodness some combination of nature and nurture? Dacher Keltner, director of the Berkeley Social Interaction Laboratory, investigates these questions from multiple angles, and often generates results that are both surprising and challenging. In his new book, Born to Be Good: The Science of a Meaningful Life, Keltner weaves together scientific findings with personal narrative to uncover the innate power of human emotion to connect people with each other, which he argues is the path to living the good life. Keltner was kind enough to take some time out to discuss altruism, Darwinism, neurobiology and practical applications of his findings with David DiSalvo.

How to Find Virtual Assistant Jobs Finding legitimate virtual assistant jobs can seem like a frustrating task. With so many scams on the web, it seems like there aren't any real opportunities available. But these positions do exist; you just need a few tips to find them. Having persistence and dedication will put you on the path to landing virtual assistant jobs in no time. Girl Honors Late Grandmother By Performing 600 Acts Of Kindness In One Year When it comes to love and kindness, there's no limit on how much you can give. On Sunday, 8-year-old Alex McKelvey, of Lakewood, Washington, completed her yearlong mission of performing 600 acts of kindness. The project first began in September 2013, when Alex’s grandmother died. To honor her life, Alex and her family vowed to complete 60 acts of kindness by what would have been her grandmother’s 60th birthday on March 22, 2014, The News Tribune reported. When she met that goal last year, Alex raised the bar and aimed to complete 600 acts of kindness by the same date in 2015. “I picked 600 because it was 10 times more than 60,” said Alex.

Supermodel - Wikipedia History[edit] Origins[edit] Model Janice Dickinson has incorrectly stated that she coined the term supermodel in 1979, as a compound of Superman and model.[28] During an interview with Entertainment Tonight, Dickinson stated that her agent Monique Pilar of Elite Model Management asked her, "Janice, who do you think you are, Superman?" She replied, "No ... I'm a supermodel, honey, and you will refer to me as a supermodel and you will start a supermodel division." 29 Ways to Carry Out Random Acts of Kindness Every Day The time has come when we cannot just rely on others to make the world a better place – each one of us has to do our bit. It is therefore time for people to be more and more aware about their Personal Social Responsibility (PSR). PSR is all about doing to others what you would like others do to you. It is about recognizing how your behaviour affects others, and holding yourself accountable for your actions. For example, contrast someone being well mannered and kind, with someone being rude. And this brings me nicely to the theme of this post – being kind to others.

Random Acts of Kindness. 80 Small Acts that Will Make You a Hero How great is it that our small acts of kindness can make someone else’s entire day? Here are 80 good deeds and random acts of kindness that can help you feel amazing. Some of these are new ideas that I haven’t seen online before. Others aren’t as original, but a reminder certainly never hurts. The first suggestion below inspired this post. Socialite - Wikipedia A socialite is a person (usually from a privileged, wealthy, or aristocratic background) who has a wide reputation and a high position in upper class society. A socialite spends a significant amount of time attending various fashionable social gatherings.[1][2] United States[edit]

Random Acts of Kindness Ideas We can get so caught up in the hustle and bustle of everyday life that we often forget to think of others. But a small gesture of kindness can not only make someone else's entire day, but it can also make you feel good. So why not spread the love and try a random act of kindness today?

The Random Acts of Kindness foundation provides ample research on the value of character development in schools. Many lesson plans, “kindness project” ideas, and other resources are provided for teachers. by kandace_stephenson Nov 22