How to Read Your Own Birth Chart - Astrology 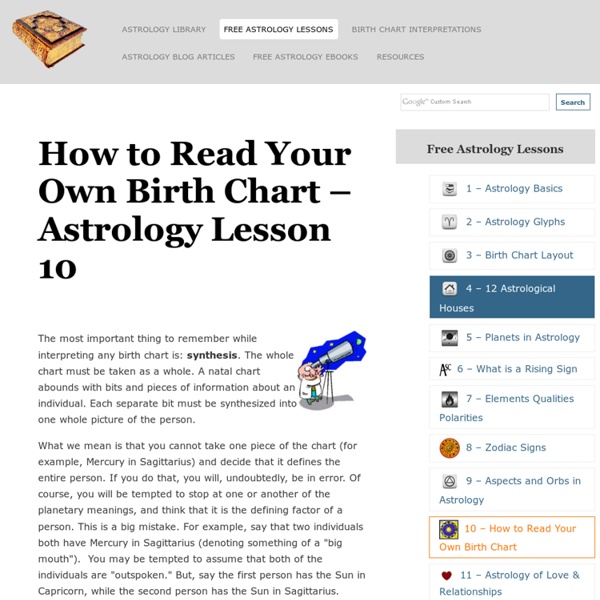 The most important thing to remember while interpreting any birth chart is: synthesis. The whole chart must be taken as a whole. A natal chart abounds with bits and pieces of information about an individual. Each separate bit must be synthesized into one whole picture of the person. What we mean is that you cannot take one piece of the chart (for example, Mercury in Sagittarius) and decide that it defines the entire person. The point, again (and this point will be repeated often), is that the entire chart must be blended together. It's as if each of us is a mosaic, made up of tiny individual images. Interpreting Planets in the Signs Look at the birth chart and take note of what sign and house each planet is in. Now you can look up the "Chart Interpretations" of each of your planets and Rising sign. The zodiac sign will show how the planet is manifested. Incorporating the Astrological Houses The other thing to remember is that the planet in the sign will focus on the House. Planet = What?

Aquarius - Complete information about your sun sign. Aquarians basically possess strong and attractive personalities. They fall into two principle types: one shy, sensitive, gentle and patient; the other exuberant, lively and exhibitionist, sometimes hiding the considerable depths of their character under a cloak of frivolity. Both types are strong willed and forceful in their different ways and have strong convictions, though as they seek truth above all things, they are usually honest enough to change their opinions, however firmly held, if evidence comes to light which persuades them that they have been mistaken. They have a breadth of vision that brings diverse factors into a whole, and can see both sides of an argument without shilly-shallying as to which side to take. Consequently they are unprejudiced and tolerant of other points of view. This is because they can see the validity of the argument, even if they do not accept it themselves. They are nearly always intelligent, concise, clear and logical. Possible Health Concerns...

Oahspe index Oahspe, the product of automatic writing by a 19th century dentist named John Ballou Newbrough, is a hallucinogenic reworking of cosmology and ancient history. Written in a pseudo-archaic style, the narrative is told from two viewpoints: that of heaven and earth. For a large part of the book there are parallel texts from each point of view on the top and bottom of the page (hence the page numbers 'a' and 'b'). There are many moving, lucid passages, dealing with ethical and spiritual topics; however these must be sought out. For a large part, Oahspe remains a sealed book. It uses a private vocabulary which is only partially explained; and describes events of mysterious significance. This etext of Oahspe has been brought into conformance with the contents of the third edition of 1912. --J.B.

The Book of Enoch Index Contents Start Reading Page Index Text [Zipped] The Book of Enoch, written during the second century B.C.E., is one of the most important non-canonical apocryphal works, and probably had a huge influence on early Christian, particularly Gnostic, beliefs. Filled with hallucinatory visions of heaven and hell, angels and devils, Enoch introduced concepts such as fallen angels, the appearance of a Messiah, Resurrection, a Final Judgement, and a Heavenly Kingdom on Earth. Interspersed with this material are quasi-scientific digressions on calendrical systems, geography, cosmology, astronomy, and meteorology. This etext has been prepared specially for sacred-texts, and is a great improvement over other versions on the Internet, with the introduction, correct verse numbering, page numbers from the 1917 edition, and intact critical apparatus. Title PageEditors' PrefaceIntroductionAbbreviations, Brackets and Symbols Specially Used in the Translation of 1 Enoch The Book of Enoch The Parables

Anti-Realism Anti-realism in philosophy[edit] Michael Dummett[edit] , without being able to produce any term of which holds. Dummett argues that the intuitionistic notion of truth lies at the bottom of various classical forms of anti-realism. Dummett's writings on anti-realism also draw heavily on the later writings of Wittgenstein concerning meaning and rule following. Anti-realism in the sense that Dummett uses the term is also often called semantic anti-realism. Hilary Putnam's "internal realism"[edit] Despite being at one time a defender of metaphysical realism, Hilary Putnam later abandoned this view in favor of a position he termed "internal realism". Precursors[edit] Doubts about the possibility of definite truth have been expressed since ancient times, for instance in the skepticism of Pyrrho. [edit] Anti-realist arguments[edit] Anti-realism in science[edit] Anti-realism in mathematics[edit] The "epistemic argument" against Platonism has been made by Paul Benacerraf and Hartry Field. See also[edit]

Hephaestus As a smithing god, Hephaestus made all the weapons of the gods in Olympus. He served as the blacksmith of the gods, and was worshipped in the manufacturing and industrial centers of Greece, particularly Athens. The cult of Hephaestus was based in Lemnos.[2] Hephaestus' symbols are a smith's hammer, anvil, and a pair of tongs. Etymology[edit] Hephaestus, is probably associated with the Linear B (Mycenean Greek) inscription 𐀀𐀞𐀂𐀴𐀍, A-pa-i-ti-jo, found at Knossos; the inscription indirectly attests his worship at that time because it is believed that it reads the theophoric name Haphaistios or Haphaistion.[3][4][5] The name of the god in Greek (Hēphaistos), has a root which can be observed in names of places, of Pre-Greek origin.[6] Epithets[edit] Hephaestus is given many epithets. Mythology[edit] The craft of Hephaestus[edit] Parentage[edit] Fall from Olympus[edit] In another account, Hephaestus, attempting to rescue his mother from Zeus' advances, was flung down from the heavens by Zeus.

CRYPTOSPORIDIA Cryptosporidiosis in Lizards by: Marcia McGuiness © Golden Gate Geckos 2009 Purpose: This provides some facts and common myths about the parasite Cryptosporidium, aka “crypto”, in a comprehensive article targeted for the average lizard keeper, hobbyist, and breeder. Description: There are eleven strains of Cryptosporidium, which is a mutant form of Coccidia. Most reptiles are considered susceptible to Cryptosporidiosis, especially snakes. Crypto affects snakes and lizards differently, and is much more difficult to diagnose in lizards because the symptoms are more elusive than in snakes. Contagion and Transmission: Some experts claim that ALL lizards have Cryptosporidium, but this is completely unfounded and false. When uninfected reptiles share water and food bowls with infected animals, they can ingest crypto oocysts. Clinical Symptoms: Many reptiles are asymptomatic (no symptoms) but are known to be carriers of Cryptosporidium. The progressive symptoms of Crypto in lizards are: - lethargy

Family tree of the Greek gods Greek cosmological entities Essential Olympians and Titans The essential Olympians' names are given in bold font. See also List of Greek mythological figures Notes References External links Media related to Family trees of Greek mythology at Wikimedia Commons Godchecker.com - Your Guide To The Gods 4 Interesting Things About the Third Eye Everyone Should Know By: Scott Thill Located in nearly the direct center of the brain, the tiny pinecone-shaped pineal gland, which habitually secretes the wondrous neurohormone melatonin while we sleep at night, was once thought to be a vestigial leftover from a lower evolutionary state. Indeed, according to recent research, we could be increasing our chances of contracting chronic illnesses like cancer by unnecessarily bathing its evenings in artificial light, working night shifts or staying up too late. By disrupting the pineal gland and melatonin’s chronobiological connection to Earth’s rotational 24-hour light and dark cycle, known as its circadian rhythm, we’re possibly opening the doors not to perception, but to disease and disorder. By hacking what pinealophiles call our mind’s third eye with an always-on technoculture transmitting globally at light-speed, we may have disadvantaged our genetic ability to ward off all manner of complicated nightmares. 1. Are you on “Tsu” yet?