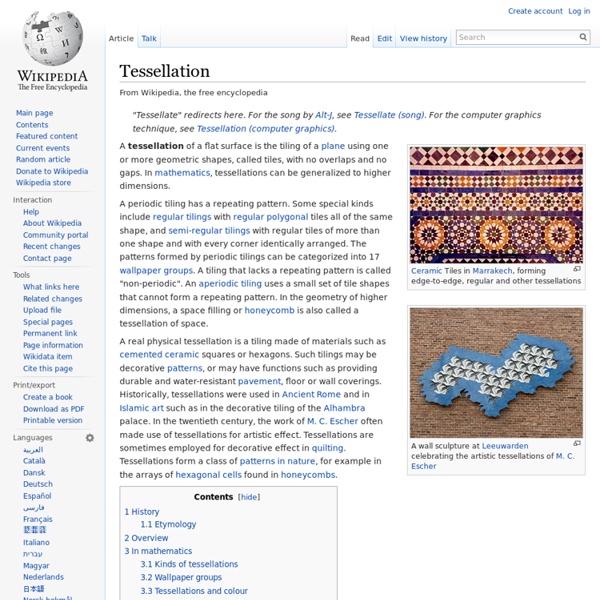 Ceramic Tiles in Marrakech, forming edge-to-edge, regular and other tessellations A periodic tiling has a repeating pattern. Some special kinds include regular tilings with regular polygonal tiles all of the same shape, and semi-regular tilings with regular tiles of more than one shape and with every corner identically arranged. The patterns formed by periodic tilings can be categorized into 17 wallpaper groups. A tiling that lacks a repeating pattern is called "non-periodic". An aperiodic tiling uses a small set of tile shapes that cannot form a repeating pattern. History[edit] A temple mosaic from the ancient Sumerian city of Uruk IV (3400–3100 BC) showing a tessellation pattern in the tile colours. Tessellations were used by the Sumerians (about 4000 BC) in building wall decorations formed by patterns of clay tiles.[1] Etymology[edit] Overview[edit] Many other types of tessellation are possible under different constraints. Other methods also exist for describing polygonal tilings. [edit]

Hassell and Draisci Studio create sleeperie to encourage naps London Festival of Architecture 2015: visitors to this London "sleeperie" can take a 10-minute nap in a colourful sling within a dimly-lit room, where soothing music is played and all technology is banned (+ slideshow). London showroom Sto Werkstatt invited architecture offices Hassell and Draisci Studio to create an interactive exhibition exploring types of architectural spaces that can be used for short-term physical and mental rest. Called Hypnos: The Architecture of Sleep, the installation has been dubbed "London's first sleeperie". It encourages visitors to switch off mobile phones, tablets and laptops, and enjoy a quick daytime nap. According to the architects, technology's invasion of the bedroom has disrupted many people's sleeping patterns and has prevented them from being able to fully relax. "On the other side, as designers we are being asked to respond to this shift in sleep patterns and working practices by designing sleeping pods in work places or airports," he added.

Archrecord2 - Architectural Record - Mafoombey explores the acoustics of cardboard By Dianna Dilworth Martti Kalliala and Esa Ruskeepää were college roommates while attending the architecture school at Helsinki University of Technology. The two students began to experiment with cut corrugated cardboard when they entered the open-to-all Habitare design contest at the University of Art and Design in Helsinki in 2005. The competition asked for a small space for listening to and experiencing music within the set dimensions of 2.5 cubic meters. Thus was born Mafoombey, a space for music. File:Pythagorean proof (1).svg The original description page is/was here. All following user names refer to en.wikipedia. 2010-07-15 04:40 Phildonnia 744×1052× (28485 bytes) {{Information |Description = |Source = I (~~~) created this work entirely by myself. |Date = ~~~~~ |Author = ~~~ |other_versions = }}

Dezeen To mark the release of his debut album Human, which came out last week, techno producer Max Cooper has exclusively shared a binaural mix with us, which features the new album’s lead track Woven Ancestry. Binaural recordings create a 3D sound experience: music seems to come from multiple different directions, as if you were sitting in the room with the musicians. The effect only works if you’re listening with headphones, though. So put on a pair of cans, close your eyes, and immerse yourself in the music! The mix, which was recorded live and also features the tracks Meadows and Gravity Well, was created using 4DSOUND, a rig consisting of 48 speakers arranged in 16 columns, which allows producers to spatially design the sounds within tracks. You can watch a video of Cooper explaining the project here.

EKKO installation by Thilo Frank Visitors to this installation in northern Denmark by German artist Thilo Frank are invited to walk through a contorted loop of timber while listening to the sounds of their voices and footsteps played back to them (+ slideshow). A circle of concrete paving creates a continuous walkway, while 200 wooden frames with incrementally different dimensions provide the twisted structure surrounding it. Microphones are hidden within the wooden beams and record the sounds made by everyone that steps inside. Riemannian manifold In differential geometry, a (smooth) Riemannian manifold or (smooth) Riemannian space (M,g) is a real smooth manifold M equipped with an inner product on the tangent space at each point that varies smoothly from point to point in the sense that if X and Y are vector fields on M, then is a smooth function.

The Hear Heres by Studio Weave The sounds of the countryside are amplified when you place your ear towards one of these four enormous trumpets built by architects Studio Weave (+ slideshow). Named The Hear Heres, the horns are dotted along a walk through the grounds of Kedleston Hall, a stately home in Derbyshire, England. One horn is pointed down towards the surface of a lake (above), while another angles up towards the sky (below). The third trumpet winds around the the trunk of a tree, so listeners can hear the movements of the branches (below). When describing the fourth and largest of the trumpets (below), Studio Weave's Maria Smith told Dezeen how "it's fun for two people to sing to each other from opposite ends." She explained how the sound is loud on one side, but "sounds distant" from the other.